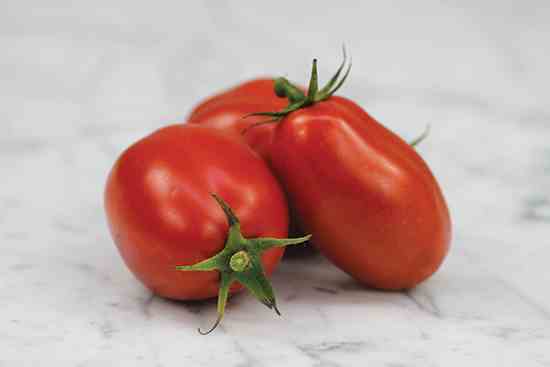 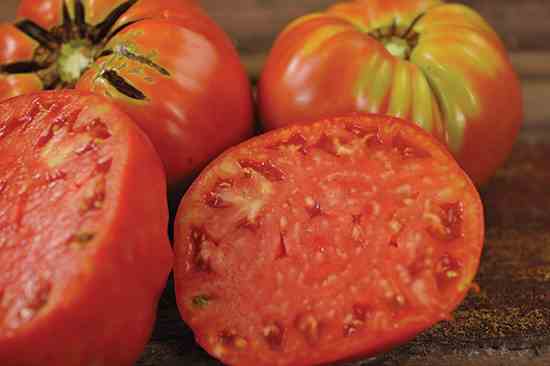 Abraham Lincoln, an hairloom introduced in 1923, matures in 87 to 90 days, is large and meaty, and is an ideal slicing tomato.
Photo courtesy RareSeeds.com
3 / 6 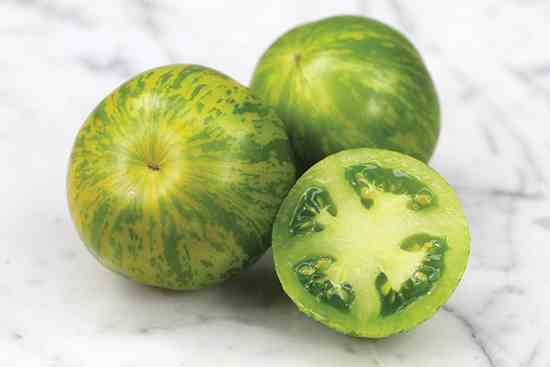 Green Zebra tomatoes are small with a spicy flavor, and mature in 75 to 80 days.
Photo courtesy RareSeeds.com
4 / 6 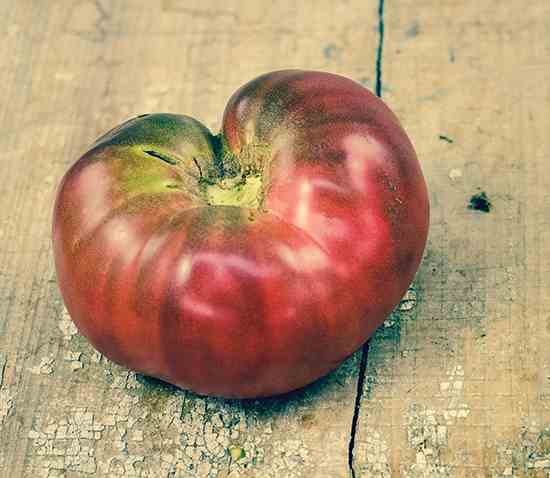 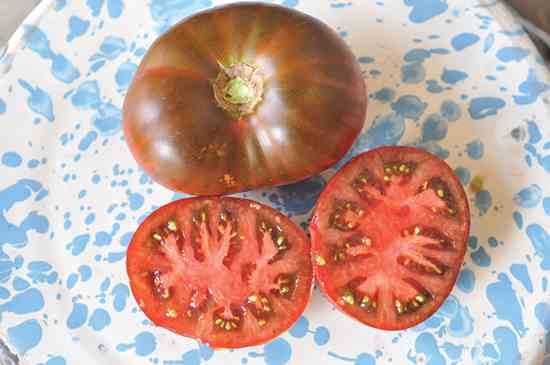 The Cherokee Purple tomato has a rich and fruity flavor, and matures in 80 days.
Photo courtesy RareSeeds.com
6 / 6 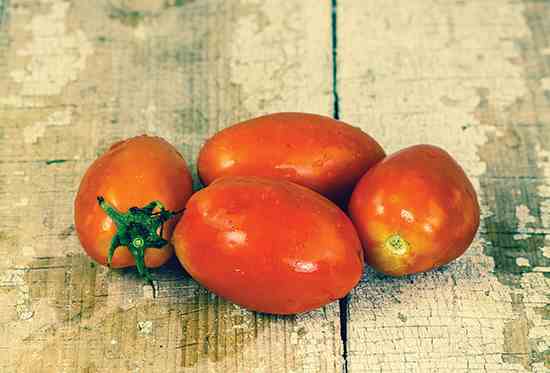 Heat-tolerant Amish Paste tomatoes are a popular heirloom variety that mature in 79 to 85 days, and are great for making sauces and pastes, and for use in salads.
Photo courtesy RareSeeds.com
❮ ❯

The amazing number of tomato cultivars that flood the market every year can make choosing which tomato to plant a puzzling choice. Since tomatoes are versatile in their uses, it helps to know which tomato variety falls into which category. One approach that can help your decision is to consider what exactly your needs are before making your selections.

For most of us, what initially comes to mind is a delicious, ripened-on-the-vine, glowing red orb bursting with juice and flavor. However, these are not the best qualities for some purposes. Tomatoes grown for processing or for shipping need to have thicker skins, fewer seeds, and less juice, while maintaining enough flavor to stand up to processing heat.

If your main goal is table-ready, flavorful tomatoes, there are many to choose from, including some old favorites like Big Boy, Better Boy, Early Girl, and Celebrity. Foremost in the slicing category, though, are the beefsteaks.

The term “beefsteak” refers to a particular tomato called the Beefsteak Tomato, as well as to an entire class of large slicing tomatoes with excellent flavor and juiciness. Some tomatoes in this category may weigh close to a pound, with several varieties weighing as much as three pounds. Beefsteaks have thin skins, and offer equally balanced sweetness and acidity. They also have a good seed-to-flesh ratio, with numerous seed compartments distributed throughout. While most beefsteaks are round, different varieties can have various outer appearances, such as ribbing near the stem, or being more slender and plump. They can come in several colors as well, from rich red to orange and from dark purple to green. Despite their popularity, beefsteaks are fragile tomatoes not suitable for commercial use. Some well-known choices for planting are Brandywine, Cherokee Purple, and Mortgage Lifter, each an heirloom and each an excellent slicing tomato. Additional good choices include Big Beef, Pink Beefsteak, and Tomazilla. For all slicing tomatoes, make sure you plant them in proper soil and offer plenty of sunshine. You can also add organic fertilizer if you’d like.

Most beefsteaks take 85 days to harvest, which means that for most of the United States, they must be started indoors and transplanted when they’re about 8 inches tall and the outside soil temperature is 60 degrees Fahrenheit or higher. All transplants will need to be hardened off before being placed in their permanent location. Beefsteaks require a sunny location with well-drained, composted soil. Because of their size and weight, they require sturdy cages or staking up with firm ties. Most are indeterminate and should be placed about 5 feet apart. It’s important to read literature about your beefsteak choice since they vary regarding their optimum climate needs, which can result in the same tomato tasting great in one part of the country, but not so great in a different geographical location. Not all beefsteaks are heirloom tomatoes, but many are, which helps explain their rich taste and high demand. It also explains some confusion over the terms “beefsteak” and “heirloom.”

When heirloom tomatoes are mentioned, we think about genetic material that has been preserved through seed saving for a period of time. The estimated time period through which the protected seeds have been saved and passed down varies with each heirloom. Some heirloom seeds were found in the 1800s, while others have been around for 50 years or more. Some seed companies consider any 50-year-old, non-hybrid tomato an heirloom. Heirloom tomatoes must be open-pollinated so their seeds remain true to the mother plant and can be viably saved for the following year. An organization called Seed Savers Exchange verifies and documents the generational history of heirloom seed stock, which has been preserved and passed on. Heirloom tomato varieties are extremely flavorful because they retain many flavor compounds that have been unintentionally bred out of commercial stock. Most heirlooms are juicy, have a soft texture when ripe, and have thin skins that easily rupture. When you plant an heirloom, it’s preferable to add potassium and sulphur. For most tomatoes, a clay-based soil produces a tastier fruit, and it’s even been suggested that reducing the watering of the plants as the fruit ripens can intensify the flavors. As for all tomatoes, the more sun, the more flavor.

Not all tomato varieties are meant for slicing, though. Among them are the smaller ‘processing’ tomatoes, which are harvested to be made into sauces, salsas, juice, paste, soups, and more, as well as for canning, freezing, and dehydrating. For these purposes, tomatoes with tougher skins, meatier flesh, fewer seeds, and less juice are needed. The varieties that fall into this category are large in number, quite diverse, and are referred to with different and overlapping names. When referenced as an entire category, they can be called paste tomatoes, plum tomatoes, or even saladettes. The most familiar of these are plum tomatoes, and the most well-known is the Roma. Although this plum-sized tomato can be served fresh, it’s commonly made into paste or sauce, or finds itself in a pot on the stove in the family kitchen on its way to becoming part of a pasta dish.

Paste tomatoes, like the popular Roma, offer less flavor, but more firm flesh. They also have fewer seeds, making for less cooking-down time. Although any tomato can be used for sauce or paste, this wide category includes some tomato specialties other than Romas, such as Amish Paste, Speckled Roman, San Mariano, and Heinz 2653. The possibilities are numerous, with new cultivars arriving every year, so only personal investigation will help you select what’s best for your area.

Entirely separate in use and taste from processing tomatoes is another category of small-to-tiny tomatoes that are highly prolific, easy to grow, and a pleasure to eat fresh. These are the grape, pear, and cherry tomatoes often used in salads.

Tomato varieties in this category come in many colors and shapes, and are sweet. Grape, cherry, and pear tomatoes are often spoken of interchangeably, with size, shape, sweetness, or sometimes color being the primary difference, with the tiny pear tomatoes being especially sweet. Cherry tomatoes are generally so prolific that mental pictures of them drying on the vine, red and yellow in early fall after everyone has eaten their fill, can haunt one in the dead of winter. Grape tomatoes have thicker skins as a rule, and are popular because they last longer after being picked than the cherry tomatoes. Grape tomatoes are good for dehydrating and are also less fragile to pack. Cherry tomatoes, which have thinner skins, are apt to be sweeter and are often juicier. They’re best for snacking and salads, although much depends on the specific variety. Sometimes, cherry tomatoes are large enough to be stuffed. Both cherry and grape tomatoes can be red, yellow, orange, or purple in color. Some good examples of cherry varieties are Sun Gold, Sweet Million, and Black Cherry. Small Indigo Blue Berries tomatoes offer a unique taste. These tiny tomatoes have a tough outside texture, but taste delicately sweet. They’re one-ounce tomatoes that appear amethyst purple, ripening to almost black with brick red undersides. They offer great flavor and are sure to be all-around pleasers.

It’s an absolute wonder to have so many tomato varieties from which to choose for our gardens. Whatever type of tomato you desire, you can grow any variety to suit your garden, your landscape, your farm, or your taste buds. Every tomato comes with its own characteristics as far as flavor or hardiness, sweetness and tartness are concerned. There are differences in soil and temperature preferences, as well, which should always be taken into consideration before choosing which tomato to plant. The possibilities are numerous and offer a broad range of fruits from farm to fork.

Certainly we can try their many uses and make new discoveries every year by appreciating and growing new varieties.