Hello everyone! For my next installment on the blog, I’m FINALLY getting around to telling you about my little greenhouse(ish) project on the patio of my apartment. Why the –ish at the end? Well, I’ll tell you: This project is in no way an “official” greenhouse, but really more of an upright cold frame with an entirely insufficient space heater stuck in it to simply keep my plants alive over the course of the winter. That’s a mouthful, huh? Honestly, the whole project is really more of an experiment than anything else, fueled predominantly by my inability to let go of my fall garden like most sensible people would have when the temperatures started dipping into the negatives. But then again, I’m not one who often gets described as sensible.

Let’s move on to the actual garden, shall we?

As you can see in the photo below, I still have an assortment of greens going, all of which have been kicking around since the end of August. I was actually a little late getting my patio garden seeded because of a few obstacles unique to this apartment. Because my patio is west facing, it only receives light in the afternoon, which, as you experienced gardeners out there know, is not the most ideal type of sun for delicate greens. So, I seeded a little late and installed a 40 percent shade cloth over the entrance to keep at least some of the heat at bay. You can actually see the white shade cloth lining the bottom of the plastic-lined panels, since it turned into the perfect way to limit freezing cold air from seeping in under the bottom of the frames. 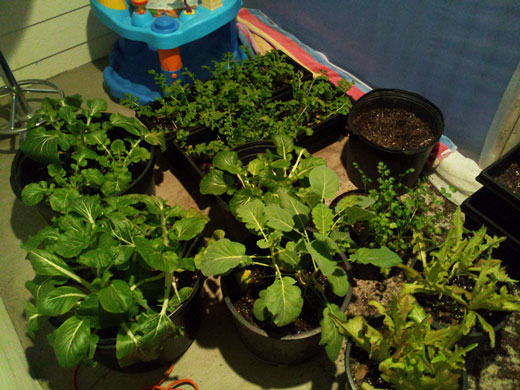 As I was saying, this little garden began as a big experiment to see what could work in less than ideal conditions, and as you can see by some rather questionable planting arrangements – yes, I have three collard plants in one small container and more bok choy than I know what to do with – it is still a work in progress! My biggest success has to be the arugula, which you can see in the two long and narrow containers at back – and next to my son’s command center, er, exersaucer, er, whatever the heck it’s called! With only my little heat source, which you can see in the photos below, I have been able to harvest arugula ever since early October, and those skinny planters are perfect for rather densely packed arugula. Up until a few weeks ago, I actually had mustard greens planted the same way, with just a little more space between each one, since I prefer baby mustards anyway, not to mention the fact that my patio just doesn’t get enough sunlight for the big honking mustards you see sometimes. (At least I think that’s the case – I haven’t actually grown mustards before this, but from what I have read, they prefer more than just a few hours of sun per day.)

So, I have arugula, cilantro, an heirloom leaf lettuce that I simply cannot remember the name of right now, nine bok choy plants, and three collards. And because the weather seems to be taking a turn for the better, with highs in the 50s this weekend, that means that I can actually repot those collards in the center, which have continued to grow much more than I originally expected. This is why I completely harvested the mustard greens a few weeks back. Potting mix is expensive, and there’s only so much room on this little patio for expansion, so sadly, the mustards got made into a delicious casserole.

I was also thinking about replanting the baby bok choy behind the collards, but honestly, I have WAY more bok choy than I will realistically eat. I love that bok choy is amazingly forgiving for the novice gardener, growing under very limited light and much colder temps than I thought it would, but I think harvesting may be the way to go. And not harvesting in the way that I’ve been doing it – if you look at the big pot at the top left of the photo, you can maybe tell that I’ve been harvesting just the leaves and letting it grow back. I chose to go this route originally for two reasons: to see if it would in fact regrow in frigid temps, but also, and probably more to the point, because it actually pains me a bit to completely take out any plant. So, as you can see, this leaves me with overflowing pots of bok choy, which I may or may not eat in the next century.

Side note: This brings me to an important lesson for any gardener, or at least those gardeners who have an emotionally driven inability to thin seedlings that do better than expected – plant lots of what you KNOW you will eat.

So now that this post is getting a tad long, I suppose I should call it a day. I have so much to share when it comes to this little project of mine that it would be silly to squeeze it all into one post. I promise I’ll talk more next time about how I actually built the plastic-lined frames. I’ll leave you, though, with some more photos that at least show you more of what they look like. Oh, yeah, and my son playing in the dirt for the first time in his life. I. Love. That. Baby. 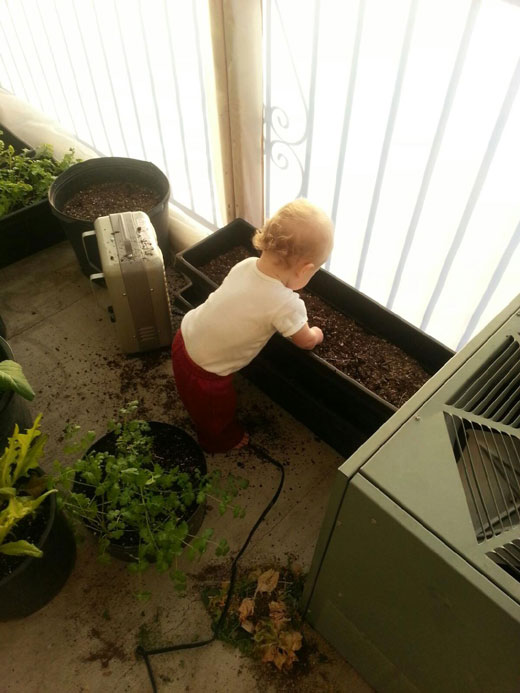 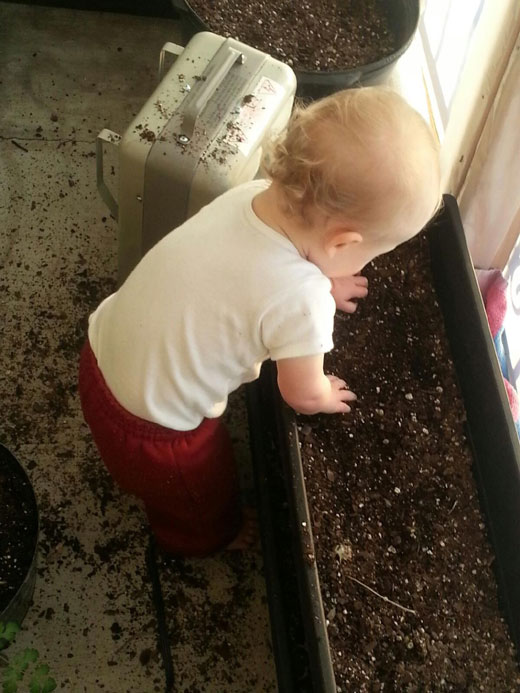