The Trials and Tribulations of Tomatoes, Part 1

It is a fact of farm life that bad things can happen. This year a bad thing did happen – my crops were the victims of blight. This season we built raised beds and brought in fresh soil and worked so hard to plant the tomato and leek crops, and they failed.

In the past, critters had decimated the crops so this year we put up electric fences to keep the animals out; I even put up an owl scare device to ward off potential raiders. I realized that animals are not afraid of plastic owls as I watched a mother wild turkey and her eight poults dusting themselves in my potato patch. That solved the mystery of why the onions and russets were sitting on top of the sun-burned soil.

I was going to get a night camera to catch what was going on but decided I would need too many of them. I decided to take my chances and pray for the best. You never stop learning about what really goes on. 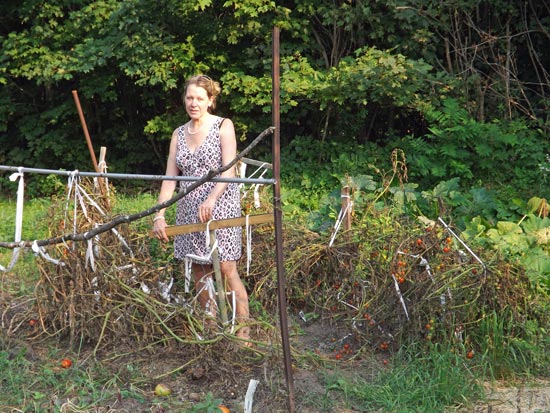 It’s a smelly and messy job tearing out all those plants, but yesterday I started the task. I realized that if we did not take what we could immediately, nothing would be left. We had to harvest unripe fruit. I was full of sadness, anger and loss as I looked at the fruit rotting on the dying vines. I pulled the brown tomato plants out with a vengeance wanting to get rid of them, as the sight of a dying harvest was so unsettling. It was a constant reminder of our failure. 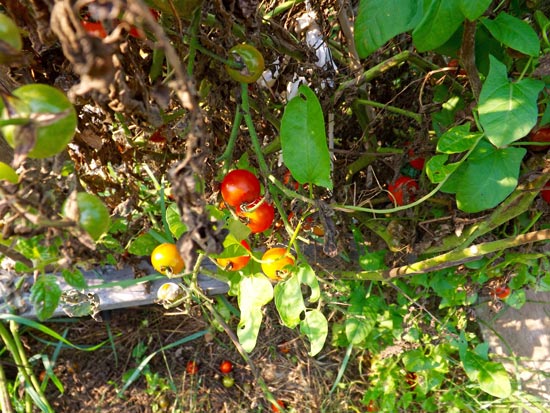 Blood, sweat and tears had not helped at all. We salvaged what little we could on that scorching first day of September. I felt closer to all the other farmers who have had similar fates. I understood what it means to have crop insurance. It is too bad that insurance is not available for small operations like mine. As an organic farmer I have decided not to use pesticides. My crops grew so well and then in a day or two the die-off started and spread like wildfire. My daughter Isabel said the beefsteaks looked like tumours, and she was right. The fruit took on hideous shapes and rotted from the inside out. At the same time my leeks began to rot. On the bright side my peppers did very well, but they were not the main crop.

Over and over again we asked ourselves, how? Why? What had we done wrong? We went through all the possibilities: too much rain, too little rain, bad soil, bad plants, planting too close together, not planting deeply enough, a black thumb, not fertilizing or maybe just the hands of God. There is no answer. I have to live with that. That is the gamble I took when I first bought this farm and plunged into the farming life. 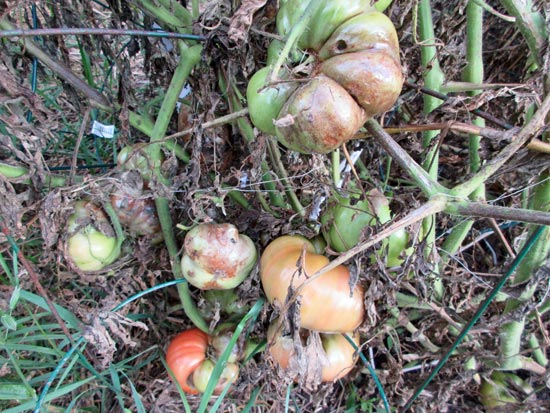 I will admit that I do not feel like planting again. A bit of my spirit is broken. I started off the season with so much hope and hard work. Good intentions count for nothing. I did not just lose thousands of dollars in growing, but also I now have nothing to sell at my farm stand.

The chef in me, of course, saw the bright side and realized that I would not have days of canning in a hot kitchen. I also decided that because I had so few tomatoes I would make roasted tomatoes. These are great to have in the freezer in the winter to bring that fresh taste of summer into hearty soups, stews, casseroles and pasta dishes. 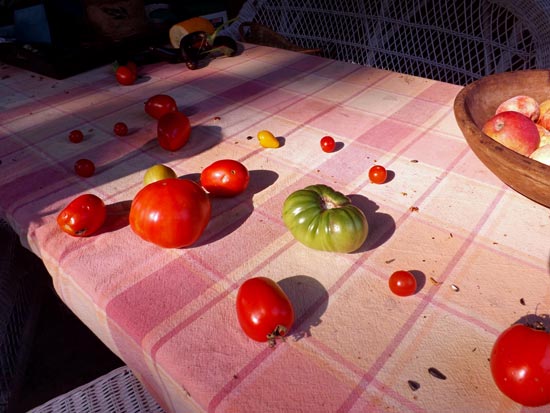 This year it is a different kind of tomato time and instead of being busy picking, sorting and processing these gorgeous fruits, I am tearing out rotting plants. However, it still seems as if I eat tomatoes three times a day! I insist on eating all the tomatoes we managed to save. I am grateful for what we did manage to rescue.

Click here for Part 2, my recipe for Roasted Tomatoes.