A Day Working the Cows

Last weekend we brought the cows and their calves in from pasture to vaccinate and to castrate the bull calves. We have 44 pair and that makes us a small operation. My husband is fond of saying ranching is not a money-making proposition, it’s a way of life. And he’s right. We make a few bucks off the calves when they are sold to feeder operations, but we’re really doing it because we like it and most of the time we break even or make a little bit of profit. It’s good to have a side gig that makes money dependably. Of course, we put a beef in the freezer. That’s the best part. And we sell a few sides or wholes to friends.

I’ve often thought that the romantic idea people have about the cowboy way of life is just that: a romantic idea. In reality there’s blood, gore, working out in the rain, wind, freezing temperatures when you’ve rather be sitting warming your heels at the wood stove. Last year we rode in freezing wind and rain to save a premature calf. We did all that, endangered our lives horseback and we were still were unsuccessful in saving it. This happens and you just have to accept it. You work hard and sometimes it’s not fun and it’s a tragedy and you do it anyway. It’s a choice. Fortunately it’s mostly pleasant and relatively easy. Watching the cows graze peacefully on the hillside in the sun is like some perfect commercial on TV.

Last weekend was one of the harder parts of working cows but it has to be done. There are so many levels to it in addition to the actual work. In this little essay I’d like to touch on some of the levels. For instance when we brought all the mommas and babies into the corrals, we were a little concerned with how much water they were drinking. We are in a drought and we knew they could suck down a lot. Our stock ponds are all dry and we’re on well water. I knew we had 3,800 gallons and sure enough by the next day they had sucked down 1,500 gallons. We needed to process them without delay so we could turn them back out to drink water pumped out of the creek.

We band instead of cut. Each method has their proponents. Some people think cutting is safer but one thing is for sure about banding. It is a heck of lot less messy. Banding is wrapping a rubber around the calf’s testicles and eventually they atrophy for lack of blood and fall off. Sound awful? Yes, it is. However, having your testicles cut off without anesthesia is worse. There’s no way around it. Good meat comes from a neutered bull. Also castrating makes the males less dangerous towards other cattle and humans when they are being raised for beef. By the way castrated bulls are called steers. 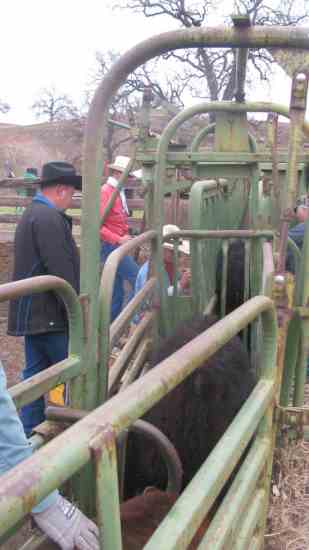 We band because it fits in with our time frame, our breed of cattle (Shorthorns), our geographic location. Castration by banding takes longer to heal than cutting. You need to factor in that it takes about a month for the testicles to atrophy and fall off. You have to think about that and correctly time any kind of castration. You don’t want to do it after the calves get too big but you can castrate by banding later than if you castrated by cutting. You can band older calves. If you cut an older calf you might take a chance on it bleeding to death. With banding there’s less chance of infection and less pain to the calf. The area quickly numbs after the band is put on. It is quick and easy to do if done properly.

But banding does have its cautions.You can accidentally put the rubber ring around the testes instead of the cord or only one testicle is banded because the other hasn’t descended yet. The ring might be too brittle and might come off before the scrotum starts to atrophy. Also the calf may need a tetanus shot. There is risk of infection as the scrotum atrophies and sloughs off. The one advantage to cutting is that it’s easy to see that the two testes are present. The other is it’s the only way to harvest Rocky Mountain Oysters. If you’re into that!

As I said before you have timing to consider. It has to be when the calf is still young enough and not too old and before fly season. So technically you need to be thinking about castration when you breed your cows because when they’re bred decides when they’ll give birth which decides how old the calf is when he’s castrated and at what time of year.

Get out your calendar and plan it best you can. Depending on where you live, most castrating should be done during early spring or late fall. It can also be done in the winter time, as the cold will constrict the blood vessels making it less likely for an animal to bleed out. The younger the animal the better but if you choose banding you want to have the atrophy complete before fly season. Ideally bulls should be castrated no older than 8 months of age. Bulls can be castrated at any time, but you must remember that if you castrate a bull older than that you will have a loss in productivity. Also the older the animal is at castration, the greater the stress, risk of bleeding, and the slower the growth rate for that animal.

On average, calves are castrated around 8 weeks of age or sooner. Some ranchers, depending on how busy they are and their willingness to go out to the pasture to find calves to tag and castrate, will castrate a bull calf when it is a day to two days old. We prefer to run our calves through a chute when they’re around two and a half months old so we can castrate, tag and vaccinate them all in one go.

If you are new at this, you should really get someone experienced to do the castrating. That way you can watch and learn before you try it yourself. It can go awfully wrong for you and your calves if you not 100 percent sure what you’re doing.

The Reason God Made Hawthorne Bushes

They are frosty crisp white puzzles of delight. Living with the cold, but no snow. There are such beautiful sculptures in nature. 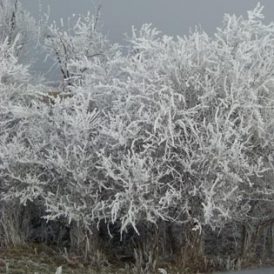