A Stitch In Time

A lot of valuable techniques of living on a farm are being lost as the world progresses further and further into the electronic age. Take the art of quilting for instance. Once quilts were stitched entirely by hand and for the sole benefit of the family. Quilts meant warmth in the winter. They were made from any scraps of material available, from old clothing, curtains, flour sacks, even denim (though pants were usually patched repeatedly until they could be patched no more). There were no quilting frames, fancy patterns, downy ticking, or ruffled borders. Quilts were plain, simple, and made to last as long as possible. They were usually sewn by the light of a kerosene lamp after a long day of chores and caring for the family.

One of my family heirlooms is a quilt made by my great-great-grandmother Elizabeth (one of the grandmothers I am named for). She’s become the family legend with different generations endowing her with heroic, almost super-human qualities. In reality, she was simply a pioneer woman who joined a wagon train going west with her new husband, and after several fruitless years came home to Arkansas, being widowed on the way when my grandfather died of pneumonia. Elizabeth was a tough old bird who knew how to take care of herself. She never really knew how old she was, but legend also has it she was 106 when she died. She must have been close, because my father was around 12 when she passed. Of course, the family swears that my quilt was made on her trip west on the wagon train, but my Granny (her granddaughter) once told me it was probably made sometime in the late 1800s or very early 1900s. At any rate, the quilt is at least 100 years old. Elizabeth would be pleased to know it has lasted this long.

My great-grandmother Lucy Wade Nowlin married Elizabeth’s son John Jr. and also made quilts for her family. The one I have was made in the early 1900s and has a stain I have never been able to get out. As you can see, the pattern has progressed to a more decorative and uniform pattern from earlier quilts. She made her own star pattern so none of the starts are perfect, which makes the quilt all the more special to me.

As we progress down through the ages, you can see that my granny Ola Roberts (Lucy’s eldest daughter) was quite good at patterns. She bought some orange and black cloth cheaply, then made the star out of all sorts of bits and pieces she had around the home. This has always been one of my favorite quilts. Entirely stitched by hand in the mid 1950s, it took a long time to complete in the evenings after her chores were done. She used it as a bedspread. When I was a teenager, this was one of the quilts I always had on my bed in winter.

When my father, Arvil Roberts, graduated in 1939, he received a unique gift from the family. I have never seen a quilt quite like this one, though autograph quilts were quite common in the mid-1900s. This one was made by my Aunt Lou (one of Granny’s younger sisters) who was a fantastic seamstress. She was a beautiful hand at embroidery. The blocks were made by different friends and family members and sent to Aunt Lou who stitched around the shapes with her sewing machine and embroidered the hand writing. In the top center of the quilt are all of the names of Daddy’s graduating class. Daddy is third from the left on the top row.

I also received a quilt from my mother, Willia Roberts, for my own graduation in 1979. It took Mom all year to make, but she had it ready by the time Greg and I marched out to receive our diplomas. She bought the pattern, but stitched the entire thing by hand. The stars are made from quilt scraps (you used to could buy bundles of small squares of cloth from material stores labeled “quilt scraps”) and some of Daddy’s old shirts no longer fit to wear. Her sister (my Aunt Freda Spears) had a sewing machine, so she backed it and quilted it for me. It was only a twin size, but I kept it with me even when I went to England, and when my son Alan was big enough for his own bed, I gave it to him. He used until he married, and it will be passed down to one of his children one day.

The next quilt is very dear to my heart. The Christmas before she passed away, my mother-in-law, Velane McAllister, gave us a quilt that was made by Greg’s great-grandmother Rosie Miller sometime in the late 1940s. (She is holding Greg’s brother Brian and that’s Greg beside her in the bow tie.) She had several quilt tops started, but did not live to finish them. So Mamie McAllister (Rosie’s daughter – in the right of the picture) finished them with the help of Velane (Greg’s mother) and had them quilted. That Christmas, they gave each of Velane’s children one of these quilts. We keep it folded on the foot of the bed, and occasionally cover up with it when chilly.

My mother-in-law, Velane McAllister, was a master quilter in her own right. Not only did she make lovely quilts, but she took it to the next level and made beautiful quilted pillows and table runners. Her gifts to her family have been treasured for years.

Lastly, comes the heirloom of the McAllister family, which belongs to Greg’s sister ReNae Stepp. It is a unique quilt made by Grandma Rosie and is a “string” or “tie” quilt. Instead of being quilted in sections, it is tied to the backing with a stitch of string. Rosie and her husband Charlie (Pop) Miller lived near Leadville, a historic mining town in Colorado. Leadville was founded in 1883 by Horace Tabor, whose second wife was Baby Doe McCourt. Tabor was by then a U.S. senator, and the divorce of his first wife of 23 years and his remarriage to a woman much younger caused a scandal in Colorado and beyond. Tabor, one of the wealthiest men in Colorado, lost his fortune when the repeal of the Sherman Silver Purchase Act caused the Panic of 1893. He died destitute but convinced the price of silver would rebound, and according to legend, told Baby Doe to “hold on to the Matchless mine … it will make millions again when silver comes back.” She returned to Leadville with her daughters, Silver Dollar and Lily, where she spent the rest of her life believing Tabor’s prediction. At one time the “best dressed woman in the West,” she lived in a cabin at the Matchless mine for the last three decades of her life. According to Miller family history, during one of the lowest times in Baby Doe’s financial period, she sold some of her dresses at auction and Pop Miller bought a few of them for Grandma Rosie. She in turn made quilts out of them when they were no longer fit to wear. Thus, a new family heirloom was born.

These quilts mean a great deal to me. They represent great skill and ingenuity, and love was put into every stitch. They are beautiful keepsakes, and valued treasures to pass down to our family. 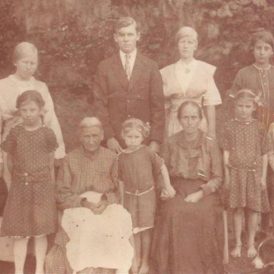