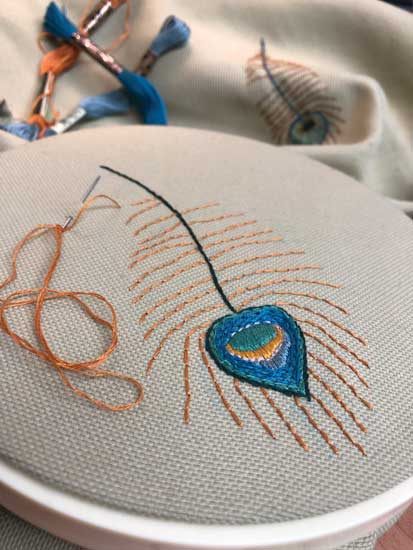 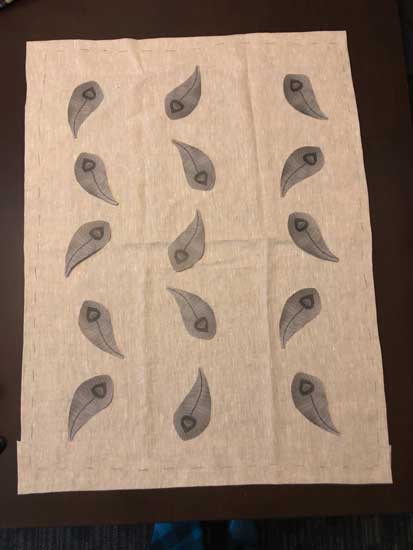 Embroidery is experiencing a revival. Unusual new patterns and jewel-toned flosses are being introduced all the time. This is inspirational to those of us who learned to embroider decades ago, but later put our projects aside in lieu of other, more fashionable crafts.

My passion for embroidery returned about a year ago, when beautiful books started crossing my desk at Capper’s Farmer. One book in particular — A Year of Embroidery by Yumiko Higuchi — inspired me to do something creative with a dingy bathroom shade whose small size meant it would be a reasonable winter project. First, I embroidered some practice peacock feather designs on an old throw pillow sham, using Higuchi’s pattern and some of the rich colors of floss I’d discovered at a local craft store. Although I enjoyed the eye-catching colors, I worried that the effect would be overwhelming in our small bathroom. That’s when I settled on a monochromatic project of off-white embroidery on natural linen. I hoped the finished shade would be subtle and elegant.

Using the peacock feather pattern in Higuchi’s book as a starting point, I drafted my own version of the motif. Mainly, I altered the feather’s eye pattern. Instead of filling in the teardrop outline with concentric shapes, I divided the eye into several horizontal stripes of uneven proportions. I also made the shape of the teardrop shorter and more squat, and reduced the number of barbs issuing from the stem, so the entire feather could be embroidered faster. 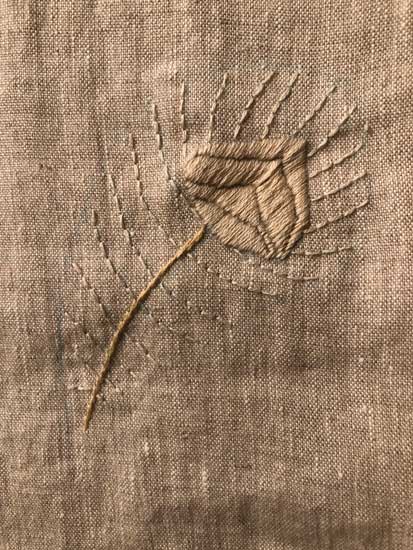 The next step was to determine the best size for the peacock feathers on my window shade project. I enlarged the motif in various sizes on a photocopier, and then selected the one I felt would look best on the finished shade. This was purely a matter of preference. I photocopied the chosen motif multiple times, cut out each one, and then experimented with different layouts on the shade fabric. Eventually, I found one I liked, resembling feathers blowing in the wind, with half of them pointed up and half pointed down. Next, I pinned the paper motifs in place on the linen, and then basted around the outside edge of each with dark thread. I did this because I knew the project would take me weeks, if not months, to complete, and I wanted the feather outlines to be visible for a long time despite frequent handling. Marks left by tailor’s chalk or a quilter’s silver pencil would wear off long before I needed them. 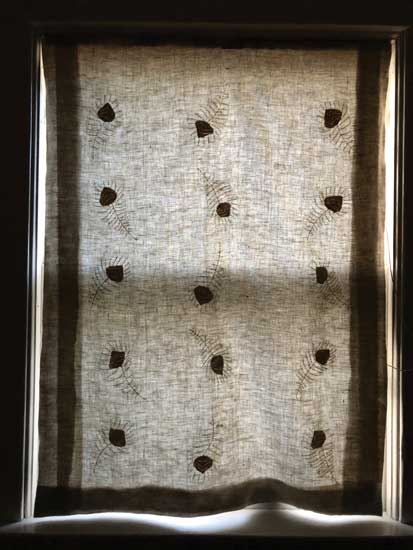 I was itching to begin embroidering the feathers, but all I had to go by were 15 empty outlines basted onto the linen. I could’ve transferred the motif onto the linen with tracing paper, but I wanted each feather to be unique. To make them all slightly different from each other, I freehanded the design elements with a tailor’s chalk wheel, which rolls easily over fabric and makes it simple to mark curved designs. I began by marking the point of the eye about 3⁄4 inch down from the top edge of the basted outline, and continued rolling the wheel over the fabric to create a teardrop shape for the eye. Then I used the wheel to divide the eye’s interior into four or five horizontal compartments, each of which would eventually be filled with satin stitch. Next, I marked a curved stem extending from the center of the eye’s base all the way to the bottom edge of the basting thread. All that was left were the barbs. Most of the barbs in Higuchi’s design curved upward at their tips, but she had the bottom two or three sets of barbs turn downward very slightly. So, I copied this style on my linen shade. All the marking was done freehand, just before I was ready to start embroidering each feather.

For embroidery thread, I used DMC size 25 six-strand cotton embroidery floss, which is readily available at craft stores. The elements of the peacock feather were worked in ecru-colored floss, in satin stitch for the feather’s eyes and outline stitch for the barbs. For a bit of contrast, I chose to work the stems with a tan-colored floss (#738) in an outline stitch. I worked the design with only two strands of the skein’s six, first pulling the tail end of the floss out from the skein and cutting off about a 1-foot length. (Use whatever length you can comfortably handle.) Then, I separated two strands and threaded one end through the embroidery needle’s eye. I knotted the other end, and set aside the threaded needle.

Embroidery is much easier to work when you use a hoop to keep the fabric taut. I centered an embroidery hoop over one of the chalked feather designs, pulled gently on the fabric’s sides to create a smooth, tight surface, and tightened the hoop screws. Then, I started working the feather’s elements with embroidery. To work a similar peacock feather using satin stitch and outline embroidery, follow the “Basic Stitch Instructions” below.

As expected, the embroidery project took weeks to complete, and then the window shade had to be sewn and hung. But the results were worth all the work. The monochromatic color scheme achieved the subtle effect I’d hoped for, but only at night. During the daytime, I was pleasantly surprised to see an entirely different effect. When there’s more light outdoors than indoors, the embroidery is backlit by the sun and stands out in a striking way. If I’d been disappointed with this effect, I could’ve sewn blackout fabric onto the back of the shade, but this was a happy surprise.

Use the following outline stitch for borders or hems. 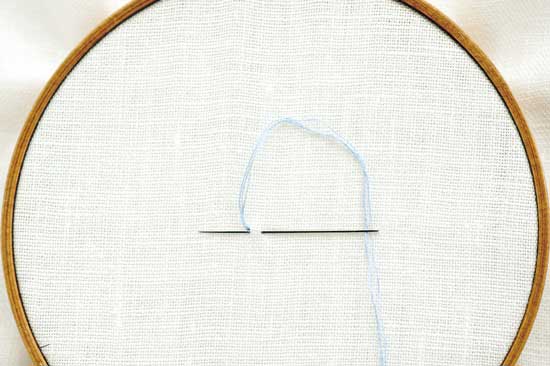 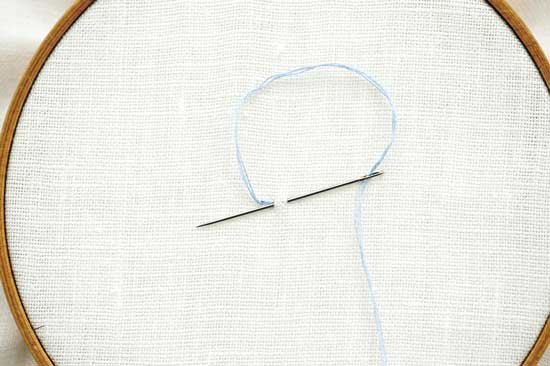 Below is a three-dimensional satin stitch. For a beautiful finish, line up the parallel threads and make sure they aren’t twisted. 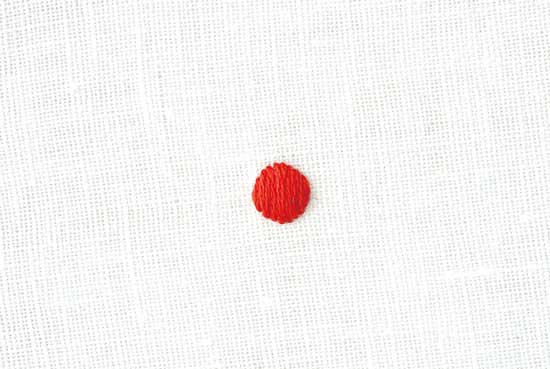 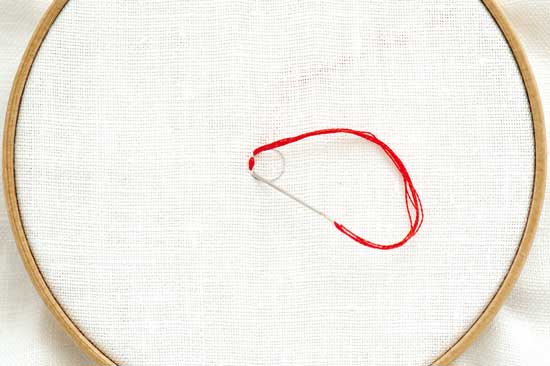 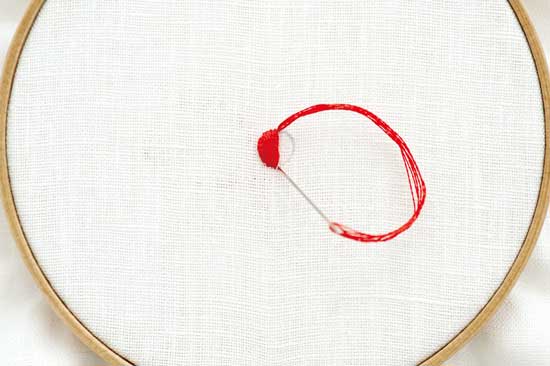 Rebecca Martin is a Capper’s Farmer editor who enjoys making all types of useful projects for the home, using a variety of crafting techniques.

These instructions and photos are excerpted with permission from A Year of Embroidery by Yumiko Higuchi, © 2018 (Roost Books, an imprint of Shambhala Publications, Inc., Boulder, Colorado). Photography by Masaco. 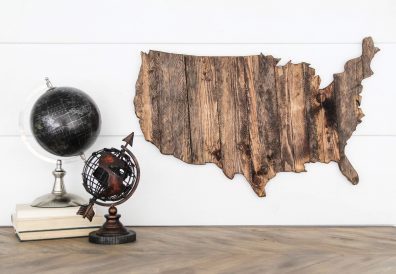 Learn how to improve and decorate your food, flower, and herb plots with these simple do it yourself garden projects. 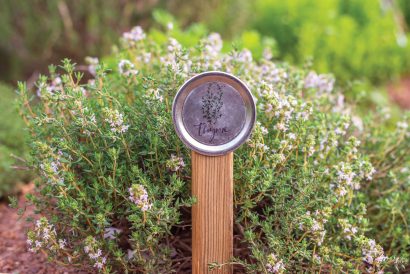 Learn how you can decorate your front door for Easter and the spring season with a simple wreath made with gumdrops. 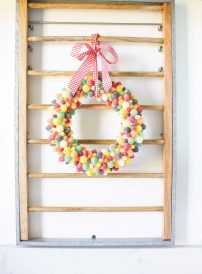