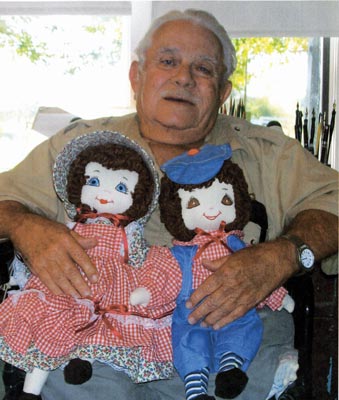 GOOD CAUSE: Jesse Wilkerson, of Gardner, Kan., shows off two of the dolls he and his wife, Pat, create and sell.
– Courtesy of Santa Fe Trails Doll Shop
2 / 3 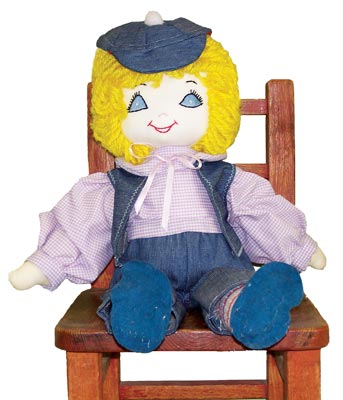 WHAT A DOLL: Perhaps what makes the dolls the Wilkersons create most special is that the sale of each one helps further research into Osteogenesis Imperfecta, also known as brittle bone disease.
– Courtesy of Santa Fe Trails Doll Shop
3 / 3 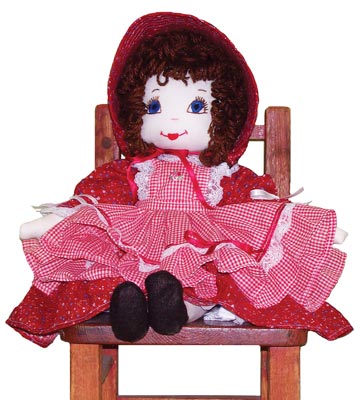 DETAILED AND DURABLE: Each doll has a head of hair made with nearly two skeins of yarn. They can withstand the rigors of play as well as a run through the washer and dryer.
– Courtesy of Santa Fe Trails Doll Shop
❮ ❯

Sturdy and old-fashioned, the dolls that Jesse and Pat Wilkerson create are a source of great pride for the Gardner, Kan., couple.

Each of the handmade dolls the husband and wife make has a head of hair made with nearly two skeins of yarn. Each is packed so solidly with cotton that it can withstand the rigors of play, as well as a run through the washer and dryer. Each is individually signed upon completion.

Perhaps what makes these dolls most special, though, is that the sale of each one helps further research into a rare disease Jesse Wilkerson has lived with his whole life.

Wilkerson, 76, was born with osteogenesis imperfecta – “OI,” for short. The genetic disorder causes bones to fracture easily, and Wilkerson estimates he’s suffered about 40 breaks during the course of his lifetime.

According to the Osteogenesis Imperfecta Foundation (www.OIF.com), the disease affects an estimated 25,000 to 50,000 people in the United States.

“OI is a genetic disorder characterized by fragile bones that break easily, so some people know it as brittle bone disease,” said Tracy Smith Hart, chief executive officer of the Gaithersburg, Md.-based foundation. “A person is born with this, and it affects them throughout their lifetime, no matter what severity they have.”

People born with Type I, which is usually a mild form of the disease, might only have a few breaks in their lives, she said, while those with a very severe form of the disease can experience hundreds. Other problems associated with the disease include muscle weakness, hearing loss, fatigue, brittle teeth and short stature.

Pat Wilkerson, 70, said her husband could break a bone just turning over in bed. “It’s not that bad anymore, but he could,” she said.

She shared the story of a tough patch her husband went through last winter, when he developed a bad cold.

“He started coughing really bad, and he had all this pain in his back,” she said. “We didn’t know what was going on.”

A hospital staff was just as puzzled.

“Finally, they did a CAT scan and bone scan,” she said, “and found out he had three fractured vertebrae, just from coughing.”

A month later, he fractured another vertebra getting into his car. That’s when he learned his coughing had also caused him to fracture his ribs.

“I don’t know how he lived through it all, really,” Pat Wilkerson said. “It was really bad.”

Living with the disease has never been easy. Wilkerson, with two of his four siblings­, inherited the disease from his father. He got the most fractures.

“My momma couldn’t keep me down,” he said.

As a child, he could get up and walk around, but he would be on crutches after fractures. Today, he uses a wheelchair.

When he fractured a bone, a doctor would come to the house and set it. For the next week or two, his mother sat with him through the nights, trying to keep his limb from buckling with a muscle spasm, and breaking again.

Wilkerson said that as difficult as childhood was, knowing his father had the disease made it easier to soldier on. When he was 18, with his father’s encouragement, he got his first job. He trained to become a jeweler, and that’s just one of a number of trades he’s been in. He’s also been an electronics repairman, a magician, a service station owner, and even a town’s mayor.

Wilkerson’s personal interests have been no less diverse. He calls operating his ham radio the second love of his life, after his wife.

The walls of the Wilkersons’ living room are lined with his paintings and drawings, and he keeps an easel and drawing tools in the same room as the Singer sewing machine that produces their dolls.

His wife began making the playthings back in 1972, when the couple were running a gas station and store. They hung up the dolls inside.

“It was self-­service, so people had to come in. When they’d come in, they’d bump their heads on them,” Wilkerson said with a laugh. “We sold a lot of them.”

These days, they sell the dolls – and homemade aprons, sunbonnets and doll clothes – through ads and online at www.SantaFeTrailsDolls.com. For each sale, they donate 10 percent of the proceeds to the Osteogenesis Imperfecta Foundation.

According to Hart, the foundation is “the only organization that’s dedicated to finding a cure and treatment for people with osteogenesis imperfecta.”

The foundation provides money for research that aids the OI community, and has implemented a program whose goal is to have centers across the country linked with data and information. That way, “somebody who has OI and has a fracture in Kansas will have the same standard of care that someone in Jacksonville, Fla., would have if they came into the emergency room with a fracture,” Hart said.

The foundation also provides information to the public and brings together people with OI through conferences and an online social networking site.