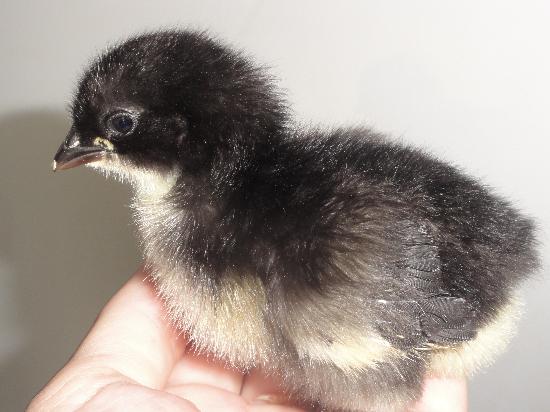 They’re heeeeeeere!   Eleven new cluckers, including a Black Copper Marans, a Barnevelder, a Welsummer, a Jersey Giant, 2 Silver Laced Wyandottes, 4 Ameracaunas, and one “stray” blue Silkie.  Later this year, another batch of Speckled Sussex, Anconas, and Salmon Faverolles will arrive.  As soon as they’re old enough, they’ll join my laying flock of Rhode Island Reds and Buff Orpingtons.  I’ll tell you the story of how I got hooked on chickens soon.  After all, before my little fluffy lovelies got here, I was up to 13 chickens (including 4 roosters).  My very patient husband even let me get some ornamental birds–Maki and Sushi the Yokohama/Phoenix crosses.  It’s only going to get better!

I’ve been planning for them since January. I thought it’d be easy to just go to Tractor Supply and grab a few Ameracaunas. Apparently they’re a popular breed this year, and even the Orscheln nearby that was supposed to have them this week didn’t.

Enter my new friend Keena. I’m not the ultimate authority on chickens, but she calls me for clucker advice. Hopefully I haven’t steered her wrong! Well, after the deal at Orscheln fell through, I posted madly on the poultry swap site that I was in dire need of Ameracaunas or Easter Eggers. I mean, I’ve planned for rainbow eggs . . .what’s a rainbow without blue or green? Keena came through. She called a friend of hers at her local Orscheln, went in first thing this morning as soon as the chicks came in, and grabbed the 4 that I wanted. She also picked up a cage that another friend was holding onto for me.

While Keena was getting my chicks, I was getting hers. She had arranged to buy some Silkies from a lady who lives just up the road from me.  We met halfway between our towns (and had a nice chat too!). I picked up and paid for Keena’s chicks, then headed out for our next rendezvous point to “do the deal.”

It turns out that Keena owed me $5. I (half) jokingly suggested that instead of getting change for a $10 bill, I’d take a Silkie. Well, bless her, she said yes. So, my “stray” blue Silkie came home. My daughter thinks I should name her Blueberry. Well, at least that’s a fairly non-gender-specific name just in case it happens to be a rooster.

So these little balls of fluff are jetting around the brooder like waterbugs. They’re eating and drinking like there’s no tomorrow. I guess I would too if I’d spent 2/3 of my life at the mercy of the postal system, living off my yolk sac. Every now and then, one will nod off a little bit, or just fall over asleep. I forgot since last year that they do that–this morning, the one I’m pretty sure is the Barnevelder (her name will be Barnie) just flopped over. OH MY GAWD DON’T DIE!!!! YOU WERE EXPENSIVE!!! When I started breathing again, I noticed that she was too, and in about a minute popped up and zoomed for the food again. They also seem to need some time to get their “land legs.” Every so often, one will trip over her own feet and go rolling. You should see them flap their little tiny wings. ADORABLE!

And yes, I have begun to name them. Not only do we have Blueberry the Blue Silkie, we have Wy and Dot the Wyandottes (say it out loud, you’ll get it), Barnie the Barnevelder, Ginger the Welsummer, Juliet the Marans, and Hawkeye the lightest Ameracauna. I expect that I’ll name the rest of the Amers one of the following (you’ve got to say these out loud too!) Miss Teak, Miss Steak, Miss Demeanor, Miss Information, or, my favorite, Miss Cellaneous.