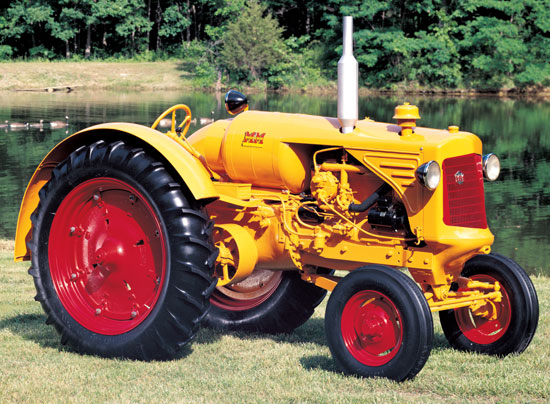 Styled much like the Universal Model Z, the Universal and standard Model U tractors were three/four-plow tractors with 42.7 engine horsepower developed by a 283-cubic-inch engine.
Photo by Ralph W. Sanders
2 / 4 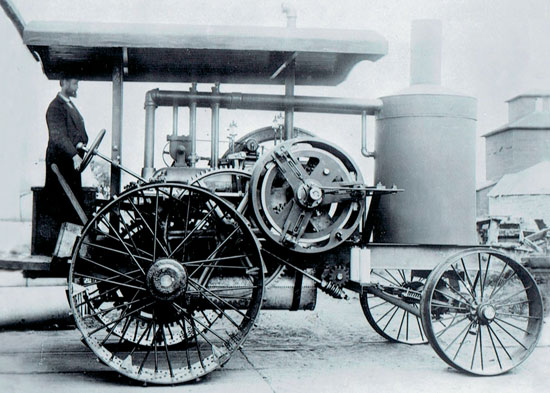 The Hart-Parr 17-30 represented a number of "firsts" for the Hart-Parr Gasoline Engine Company. It was the first tractor to come out of a new tractor plant and one of the first to be called a "tractor."
Photo courtesy Floyd County Museum, Charles City, Iowa.
3 / 4 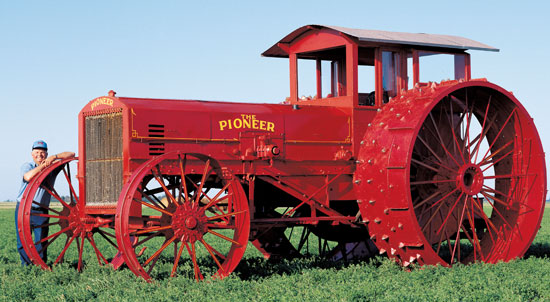 The Pioneer brand name is rather fitting for the 30-60, since the company was an early pioneer in the use of a tractor cab with front and side windows and an enclosed engine. It was also ahead of its time in power as it was claimed the 30-60 could easily pull a 10-bottom plow.
Photo by Ralph W. Sanders
4 / 4 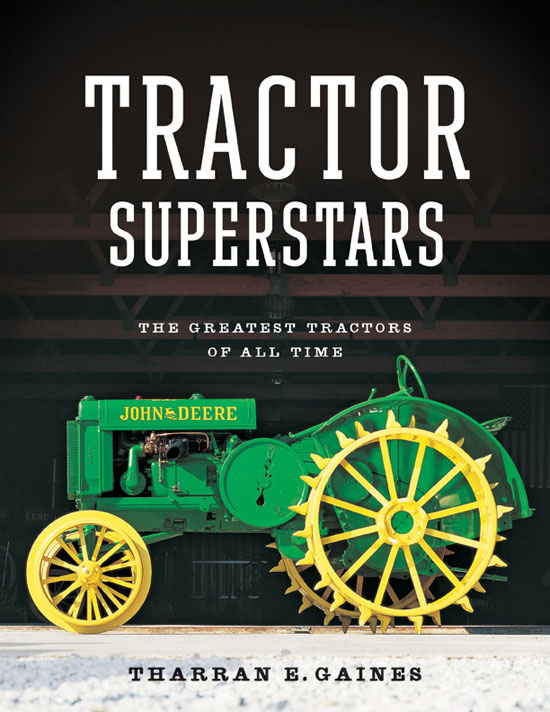 From John Deere to International Harvester, hundreds of farm tractor companies have built models over the years. Some have been innovative, changing farming for years to come and influencing other tractor brands. "Tractor Superstars" by Tharran E. Gaines focuses on these remarkable tractors, including technical and performance specifications.
Cover courtesy Quarto Publishing Group
❮ ❯

Many companies have built hundreds of farm tractors over the years, from the 1910 Case 110 steam tractor to the latest-model John Deere 8320R. The most innovative models changed farming for years afterwards and influenced the designs of other tractors. The most wildly popular tractors have sold in the hundreds of thousands.

Tractor Superstars (Quarto Publishing Group, 2015) by Thomas E. Gaines. focuses on these remarkable tractors, including technical information such as the engine, horsepower, rpm, top speed, and weight. A wide collection of detailed photographs makes this one book that no one interested in tractors, tractor collectors, or anyone nostalgic for farm life will want to miss.

You can purchase this book from the Capper’s Farmer store:Tractor Superstars.

First in the Field

There’s always something to be said about being the first to introduce an innovation. Sometimes it means being remembered in history, like Wilbur and Orville Wright after they became the first to build an airplane that actually flew. Other innovations were simply ahead of their time and took a few more years to catch on. It was no different in the tractor industry.

Some firsts, like the first three-point hitch developed by Harry Ferguson and the first tractor with an independent PTO, are still remembered. Those were also some of the innovations that caught on immediately. The benefits were so obvious to potential customers that other tractor manufacturers were practically forced to adopt the same technology or develop a similar design if they wanted a share in the market.

Other firsts, like rubber tires, took a little persuasion before they were widely accepted. Who could believe that rubber would provide better traction in the field than steel lugs that dug into the dirt? It was something people had to see for themselves to believe. Of course, other revolutionary ideas—like tractor cabs and front-wheel assist—were simply ahead of their time. Sometimes it wasn’t even the tractor manufacturer or a lack of sales that was at fault. In this chapter, you’ll note that the Caterpillar Challenger is recognized as the first track tractor with rubber tracks. But maybe it should be said that it was the first successful tractor with rubber tracks. In reality, Cletrac introduced a crawler with rubber tracks much earlier in 1940, making it the first in the field with such a unique feature. Unfortunately, the technology of the era could not produce a stable rubber track that didn’t stretch during use. So Cletrac went back to steel tracks before the idea even got off the ground.

It wasn’t always the big things that made a significant impact on customers, either. Sometimes it was something as simple as being the first tractor manufacturer to use a dry, replaceable-element air cleaner in place of the oil-bath air cleaner. Not only could it go for long periods without cleaning, but even when cleaning did become necessary, it wasn’t nearly the dirty, messy job required to dump and replace the oil in the oil-bath container.

The pages that follow represent only a few of the most noteworthy firsts in the tractor industry. There have obviously been hundreds of innovations that have been introduced between the time farm tractors were developed and today’s era of tractors that have everything from satellite-guided steering to cab suspension. But with every innovation that was introduced, somebody had to be first.

Charles W.Hart and Charles H.Parr were still engineering students at the University of Wisconsin in Madison when they founded the Hart- Parr Gasoline Engine Company in 1897 and began producing stationary engines. However, they soon outgrew their operation in Madison and moved the business to Charles City, Iowa, where they expanded into tractor manufacturing in 1901.

Although the 17-30 wasn’t the first tractor to come out of the new plant, it was one of the first round of tractors the company produced; it was historical in that it was one of the first tractors to actually be called a “tractor.” Up to this point, most units had been called “traction engines.” Hart and Parr combined the words “traction” and “power” and their Latin roots to create the term “tractor.” The Model 17-30 was also responsible for Hart-Parr being recognized as the first true tractor manufacturer in the industry, when more than a dozen units were factory-assembled in 1903 alone.

The very first Hart-Parr, or Model No.1, also claimed 17 drawbar and 30 belt horsepower; hence, the model number 17-30 for the later version. However, the No.1 was essentially one of the company’s stationary engines geared to the rear wheels on a steerable chassis. Still, it was noted as being the world’s first production farm tractor with an internal combustion engine. The No.2 followed with a more complete engine/transmission powertrain, but no seat for the operator. No.3 in the series featured the same horizontal two-cylinder engine and is, today, on display in the Smithsonian Institution as one of the first tractors available to American farmers.

Introduced in 1903, the 17-30 was still based on the prior No.3 model, which featured a huge 1,654-cubic-inch engine that utilized water injection to control detonation. The early 17-30 models also featured a closed radiator for oil coolant, which depended on exhaust-induced draft for cooling. However, this idea was soon abandoned in favor of a corrugated fin radiator that appeared in all later models.

Based in Winona, Minnesota, the Pioneer Tractor Company was an early leader in the use of tractor cabs and sheet metal to enclose the entire engine and drivetrain. In fact, the 1910 Pioneer 30-60, which was one of the first tractors built by the company, had a canopy-covered “cab” complete with front and side windows and an upholstered seat. Pioneer also claimed to be first with other features in tractor design, including an entirely enclosed and oil-bathed drive gear train, all-machine-cut steel gears, a three-speed sliding gear transmission, and an automotive-type front axle and steering system.

It was claimed that the Pioneer 30-60, when new, could easily handle a 10-bottom plow (14-inch bottoms) and, in one Winnipeg tractor trial, a 30-60 did indeed pull a 10-bottom John Deere plow with ease in the plowing segment of the contest. Unfortunately, Pioneer did possess a drawback when it came to belt applications. Due to its design, the engine was arranged so the drive pulley and water pump worked together. Consequently, if the belt pulley had to be stopped, the water pump also quit, which could quickly lead to an overheated engine—particularly during hot summer months when most small-grain threshing took place.

Due to its success in breaking prairie sod, the Pioneer 30-60 quickly found success in Canada, as well as the Upper Midwest. However, Canadian tariffs on imported farm machinery added considerably to the cost of imported tractors. To compensate, Pioneer built a small factory at Calgary, Alberta, in 1912 with the idea of moving the manufacture of the 30-60s to Canada using components brought from Winona. In so doing, the company avoided the Canadian tariffs, and consequently sold a number of Model 30- 60s on the prairies, particularly in Saskatchewan.

Like so many tractor companies, though, Pioneer was not able to survive the move to smaller tractors. Pioneer underwent reorganization in the early 1920s, but did not recover and disappeared as a company in 1927.

A Showcase of Classic Small Tractors

These machines showcase collectible tractors on a smaller scale. 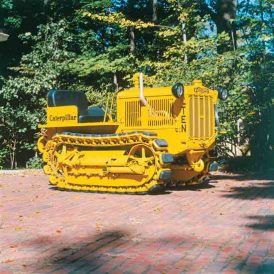