I really wonder if you as a reader can get the full picture of all the junk spread out on our farm! I mean, how many times have you found bed springs in the pasture, or a refrigerator on its side in front of the barn? A bathtub in the dog kennel and a ceramic toilet nearby? The loft of a large shed full of furniture including a washer and dryer? A piano and stove with microwave on the lower floor? When we thought we couldn’t be surprised anymore, we were.

Well, we accomplished many cleanup endeavors, and one of them was a pile not far from a building we call the pit because it has one in the floor. A neighbor gave us its history, and we learned that the building was built by a gravel company for use to repair their equipment while they worked in a nearby field. 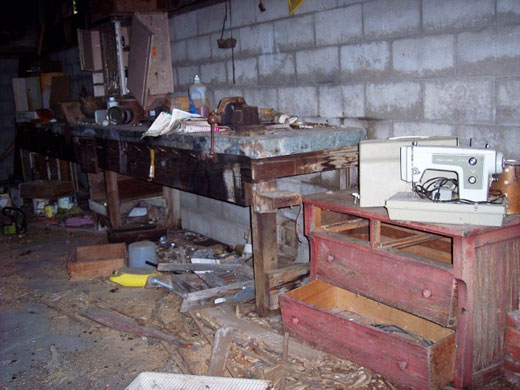 The pit minus most of the rubbish. A perfect place for a sewing machine, right?

There was a partially covered mound just over the bank from the pit. As Todd, Nancy, Larry and I dug into it, we not only found the usual junk, but also machinery parts, old tools, tractor headlights, and sad to say, deteriorating tractor batteries. I’m so glad that now there are recycling places where farmers can take such hazardous waste. There is no charge for this, so hopefully they take advantage and are better stewards than in the past. I grew up on an Iowa farm, and I know that Dad just threw whatever wouldn’t burn into the Little Sioux River. In those days, most things probably eventually disintegrated, but what a shame. I don’t know what he did with used batteries. 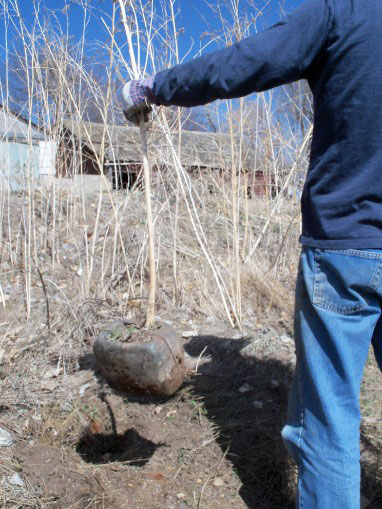 We didn’t know we were growing toasters!

We were careful when we found chemicals, poisons, and paint cans while cleaning out the buildings, and saved them all in one place. Eventually, the buildings were cleared, and we loaded up the trunk of our car. Wow! It was completely filled. When we took the load to a special disposal site, we felt as though our little farm had been purged.

Another cleanup job was all the used tires. Larry and I would go on what should have been a pleasant walk exploring our new land, and become disheartened from seeing so many tires left here and there. Some of them were huge. Larry began to keep count. Eventually, we were able to gather them up – all thirty-five. 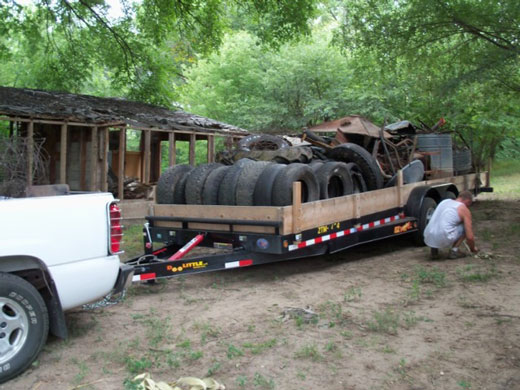 So far, we’ve had a young junk dealer haul away our pile three times.

Then there is the wire fencing. The men have pulled barbed wire out of the ground, from around trees, and a little here and there, but we still have some places along the creek and in the far northwest pasture where wire is near its original usage, half buried in the ground; a nasty job awaiting a time when there is nothing else to do. Ha!

Although we refer to that first year at the farm as the cleanup year, I doubt the cleanup will ever end. So what is left after five summers besides barbed wire? Well, surprises continue to resurface. We’ll be walking along and maybe catch our toe on something. Then, after digging a little, we’ll uproot a metal fence post, an old tool, a piece of iron, and once I found a Kansas license plate still in good shape after many years. We’ll note to each other that we’re sure glad the mower never hit that and toss it in with other such finds. Yes, we continue to feed that ever growing junk pile for yet another pickup, someday, but our land is lookin’ good!

Quote: “I think having land and not ruining it is the most beautiful art that anybody could ever want to own.” Andy Warhol