Finding Paradise Right Where You Left It

Seven years ago my wife had a chance to visit Santa Fe and she fell in love with what she saw – myriad creative minds living a lifestyle that she could only describe as pure bliss. I was interested in what she was able to witness and about a year later I had the opportunity to visit Arizona. I was blown away. It took only about a week for the two of us to decide that our life needed to start heading toward the Southwest. There was something about the beauty and solitude of the desert, the mountains, and the people that we couldn’t shake. No matter what occupied our daily lives we always came back to this central idea of creating a life for ourselves and our future family in the rural spaces of this gorgeous piece of Earth.

It took us several years until we reached a point that we felt was secure and stable enough, plus we had put enough money back to feel safe, so that we could venture out to the desert again to start prospecting for land. We were immediately overwhelmed.

Not long after hitting that first stretch of open road in New Mexico did we start to understand just what we were in for. There were a multitude of climates and micro-climates with such a variety of landscapes that we couldn’t make up our minds. It was all too perfect. How would we make such a decision?

After spending about two weeks surveying New Mexico we came back more disillusioned than ever. It felt like we had taken several steps back and the decision of where we would settle down and plant roots became cloudy. This caused us to hold off and try to put the idea of moving there on the back burner.

About two years ago, after searching for possible homesteads in Arizona, rather than New Mexico, I started to see that there were many opportunities our there that weren’t available to us when we first sought out the desert. For one, land was cheaper. That was a huge plus for us. Second, it wouldn’t be hard to find a piece of land in the middle of nowhere. After all, it looked like a majority of the state was sort of “off the table” or government land, meaning we could buy an adjoining piece of property and wouldn’t have to worry about anyone encroaching upon our private paradise. Finally, there was the land itself. We were blown away by New Mexico but once we starting seriously considering Arizona we could see that the beauty there was unmatched. In our opinions, this was something worth keeping at the top of our priority list.

More time passed. We started noticing little signs that seemed to point toward moving to Arizona. We didn’t like all of the negative press we heard from out of Arizona but we chalked it up to the same kind of people that tend to live just about everywhere. We figured we’d live far enough away from people that we wouldn’t have to worry about getting caught up in politics or other such contrivances. We also seemed to notice Arizona coming up more and more in random conversation, or on the radio, or even in books we were reading. It seemed too coincidental for us to simply ignore.

So, we packed up and went on a massive road trip to explore as much of the state as we possibly could. We had already made arrangements to visit several pieces of land, plotted out the best routes to visit them as well as to see some of the state’s other natural beauty, and we were confident in our newfound idea of a perfect place to live.

The same thing happened once we arrived – we were overwhelmed. But this time we were better prepared. Instead of letting the immensity of it get to us we decided that we would be strict with ourselves. It went a little like this: “What do you think of this parcel of land? Would you pay what they are asking right now, cash, if you had the money in your pocket?” If the answer wasn’t an immediate ‘YES!’ then we moved on. If the answer was, in fact, a yes, then we would comb the parcel with a fine-toothed comb, disregarding it at the first sight of something we didn’t quite like, whether it was too close to a large city, too close to a suburb or neighborhood, or if it was too close to something nasty like a factory. We even went so far as to ignore properties that we found to be too close to old Uranium mines, any sort of past or future oil venturing, or even land that we felt would possibly interfere with any of the tribes in the state, like the Zuni, Navajo or Hopi. We wanted to find the “perfect” piece of land, mind you. And we didn’t want to bother a soul, harm a fly, or be annoyed by a neighbor (you know, that guy that always seems to know when you’re outside working and can’t seem to take the hint that you don’t want to be bothered?).

Another week went by and we still had not made any headway on a final decision so we packed in and went back home to Oklahoma.

This is when things became clearer and easier for us. After going over every minute detail of our journey, the pros and cons, what we liked and didn’t like, we started to do something we never thought of in the early stages of our exploration. We made a list!

Our list was simple. What did we need to do, want to do, and have to do with this land? It was as easy as that. My wife wanted to be close enough to at least a few people so we could raise kids nearby some friends. I wanted to work the land, grow food and build. We went on and on with our list and then we did something that seemed to make the decision for us just ‘click’. We summed it all up into a few essential necessities. I required enough land to grow food and my wife required a location that wasn’t too far removed from society, although we still wanted to be as far away from the big city as possible. That, and our land needed to provide us with all of our food and water.

It struck us like lightning and we couldn’t believe what the verdict was: We would stay in Oklahoma!

All of those years of dreaming of the desert and planning, saving, preparing for the big move, and we landed on the idea of simply staying where we were raised. It’s funny how simple it was yet it took us so long to discover that we were all right with it. From the very beginning we thought that we had to get out of Oklahoma, that it wasn’t suited for the types of people we were and wanted to be. All along it turned out that what we were really looking for was where we had lived our entire lives.

So, we found a piece of land that met our criteria and within two months we were moving. It was fantastic. After the first week we realized that it was perfect for us. We could envision the chickens free-ranging in the yard near the house, large garden beds that would yield enough food to keep us through the longest winter, and plenty of water from down below to quench our thirst during the hottest summer days.

I’d have to say that we couldn’t have made a better decision and all it took was a journey to the desert that spanned seven years to show us what was always right in front of us.

We still have every intention of buying some land out in the desert one day and using it as a place to relax on vacations, or even a place to build a cabin when we retire and live out our lives in the expanse of that big open sky.

Drilling down into the details of soil and water. 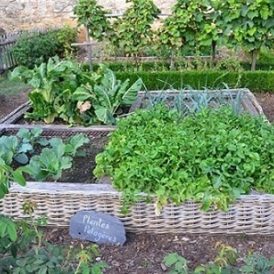