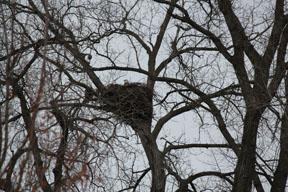 It’s Just a Matter of Time

You only have a few more days to see the height of patience as the Decorah, Iowa, eagles sit on their three eggs.  The folks at the Raptor Research Project expect the first eaglet to hatch between March 23 and 25.  That’s this week!   If you haven’t been to their webcam, here’s where to find them http://www.ustream.tv/decoraheagles

I normally write about food, but the youngest granddaughter and I have become enamored with the eagles so this blog is tangentially about food.  Our family caught up with the Decorah eagles last year after the eaglets had hatched and stayed with them until the eaglets fledged and flew the coop, so to speak.

We started watching this February as the adult eagles’ refurbed their nest.  It is 80 feet up a cottonwood tree.  As we watched one eagle would carefully place a stick in the nest and fly away.  Then the 2nd bird would fly in and just as carefully move the stick somewhere else.  Since my husband and I have had the same decorating issues with our furniture, I know it’s wrong, but it’s hard not to treat these raptors as humans.

What the 9-year-old granddaughter likes to do is show up, settle in with a salty snack in hand, and check on the progress.  But she is not as patient as an eagle. Since all the eagles have been doing recently is sitting still on their eggs she doesn’t even finish the popcorn before it’s time for her to move on.

This year the project has a new camera and the picture is clearer which means once the adults start feeding the eaglets we will really be able to see those fish torn apart.  Perhaps we’ll even be able to identify the small furry rodents that periodically appear in the nest and seem to be a favorite food of raptors.

We’re expecting to enjoy the next couple of months while the eaglets keep us entertained as they grow. 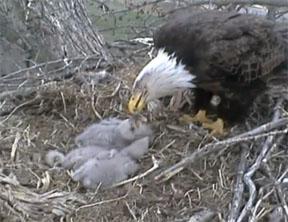 As I reread this post, I see that I’m not as far away from “food” as I originally thought.  After all, it seems whenever we have a special family time, food is involved in one way or another.