During my 40 years of existence, I have found several things that have pitted neighbors against each other. One is politics. Since this is an election year, I will steer clear of that topic. I get enough of that from the evening news. What I will blog about is the dispute over property lines.

The neighboring properties have changed hands several times in the 23 years since I have lived there, which is why the property got surveyed in June 2000. I wanted to know exactly where the land started and ended. Every neighbor I have had since then has been told where the property line is. Two of those houses are currently being used as rentals. The landlord, for reasons only known to her, refuses to believe that the survey is correct. She insists that about ten feet of my backyard is hers even though my paperwork says otherwise.

Another neighbor, who just recently bought property behind me will sometimes mow about four feet into my backyard, sometimes closer to eight to ten feet into my back yard. It depends on who’s mowing the yard. The property on the south side of me comes over by a good six feet.

Am I reading too much into it? Well it depends on how you look at it. They are mowing part of my yard for free but for entirely the wrong reasons. They really do think they own that small chunk of land. Never mind that the cost of the survey was $300, the stakes are in the ground and illegal to move them. Never mind that there are No Trespassing signs posted right in front of them.

If they had been diligent enough to do their own survey of their own property, they would know that they don’t own what they think they do. So for now, the battle continues. 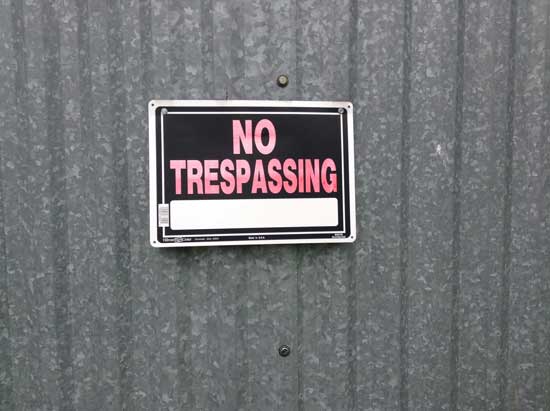