A legacy is an important part of a family. What sort of inheritance will be left to the children? Not just monetary, but ethically, spiritually, physically? My family has never been financially wealthy. Our legacies have consisted of knowledge and physical items. My father left me a legacy of integrity and honor. My Granny left me a legacy of old-fashioned know-how, an unshakable faith in God, stories of my family, and local legends. My mother left me a legacy of cast-iron. 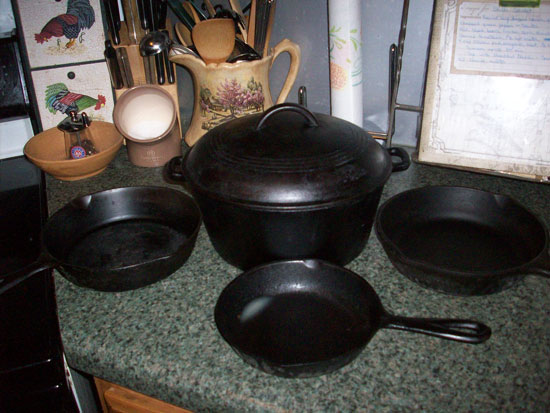 No one could cook like my mother. She could throw together a meal in minutes for unexpected company and never break a sweat. She could cook, bake, preserve, and can to perfection. And she did most of it in either her stainless-steel cookware or her cast-iron. As an only child, I inherited all of it. At least, the cooking utensils.

Cooking has never come easy to me. I love to do it, but am not gifted like my mother was. I am quite good at cooking meals. But when it come to baking, most of my attempts supplement the pigs’ breakfasts. Alas, my desserts must remain store bought.

My favorite cookware are the cast-iron skillets I inherited from my mother (a few pieces even belonged to my grandmother). They are my prized positions, and I would be lost without them. Mother taught me how to use them and how to care for them. I keep them stored in my oven when not in use. I keep them wiped down with homemade lard. They are as clean and shiny as brand new. The secret is keeping them warm and wiped down. Whenever I use the oven and then turn it off, I return the cast-iron to the oven while still hot. This keeps them seasoned. In the winter, we occasionally turn on the oven with the door open to add warmth; I leave the cast-iron inside. I also render lard in my big “pot” and the dutch oven. When through, I simply wipe them down with a paper towel and leave the residue.

Contrary to most experts, I actually do wash mine when necessary. I put mild dish soap on a damp ‘scrubby’ and wipe down the interior, rinse it good, dry it, and re-coat with lard. I have done this for years (as did mother before me) with no harm coming to the skillet. I will even use an SOS pad, rinse, re-coat with lard, and return to a warm oven.

I always have a skillet on the stove. I am southern, therefore I fry. Not everything we eat, but we have fried sausage or bacon every morning with occasional fried eggs. Fried potatoes are a weekly event, and I adore fried chicken. After frying something, I simply slide the skillet off the burner, put a lid on it, and leave it. The next time I fry, I use the same grease. This not only flavors my next meal, but keeps the skillet well seasoned. I have several skillets of various sizes; I keep them swapped out so all get used on a regular basis. To refresh the grease that has been used for several days, I simply fry a pan of potatoes. Potatoes seem to absorb impurities, and the grease will be fresher the next time it is used. Well-used grease is also a must for a pot of beans. 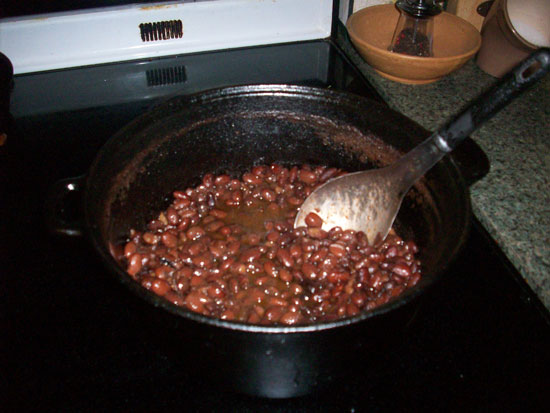 I have a cast-iron dutch oven for beans. I look over the beans, rinse them thoroughly, put them in the dutch oven, add a good quantity of salt (I like sea salt), and pour my skillet of used grease over them. Then I cover them with boiling water and let them soak for 2 or 3 hours before cooking. I will also add bacon or ham hocks if I have them thawed out. Then I wipe out my skillet with a paper towel, put it back in the oven, and set out a new one to be ready for breakfast the next day.

I make biscuits in my cast-iron. I bake cornbread in them. I roast or bake vegetables in them. I bake casseroles and shepherd’s pie in them. I make quiche in them. There simply isn’t much you can’t do in cast-iron. Mother would bake cakes, pies, and even cookies in them. And every time I use them, I remember all the mornings I woke up as a child and smelled the bacon or sausage cooking in my mother’s kitchen. I would go in to find one cast-iron skillet with meat, one with gravy, one coming out of the oven with biscuits, and the dutch oven with beans already soaking for the noon meal. Mother not only left me a legacy of her cast-iron cookware, but one of security, love, and comfort. 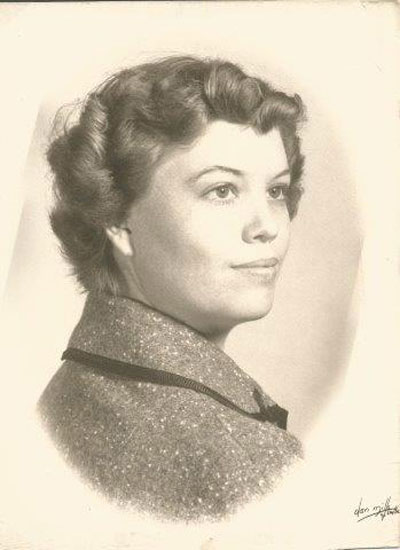 A ramble down a country lane. 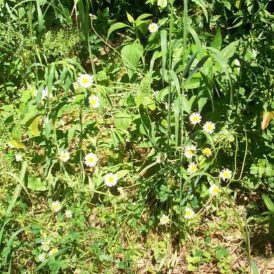 Invisible in the Outhouse

Young boy tries to be invisible in a very
visible outhouse.