A Pen of Premium Berkshires

It’s 1889. My husband’s grandfather’s family has just immigrated from France to Bakersfield, California to open a bakery. They bring their old country ways and embark upon creating a little French community where they’ve finally settled. In later years my husband remembers the smell of the loaves coming out of the oven early in the morning. It brings back fond memories of “Papa” and now French bread is his favorite food.

Nowadays we go to the grocery store and I have to bite my tongue as he goes around to each potential bread loaf to “squeeze the Charmin.” If it’s hot and soft he buys it. Yesterday as I was cleaning I wasn’t expecting to find loaves of bread in the pile of stuff my husband got from his dad after he passed but I was hoping to find a French bread recipe. I didn’t find one. No doubt the recipe was never written down and if it was it would probably be “wheat flour and yeast mixed, kneaded, then baked in a hot oven with the steam at the right time.” Steam makes the wonderful crunchy crust and soft interior.

What I did find was an old tabloid newspaper. A treasured memento of times gone by. “Pacific Rural Press”, 24-page edition. As I held it I could see it coming off an old fashioned Guttenberg printing press sheet by sheet into the hands of the pressman. He hold it up and looks for imperfections and finding none he puts it in the pile for collation and folding. Who was he? What was his life like? A closer inspection reveals the publisher’s name: Mr. A. T. Dewey. Nothing further is noted. 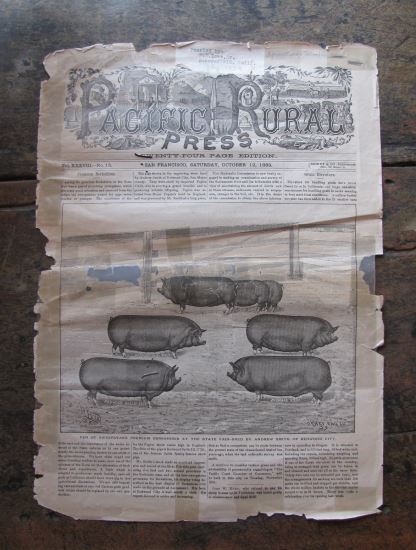 On the front page there’s an article about “A Pen of Premium Berkshires” at the State Fair. On another page is a letter to the editor from a writer who makes a good, strong case that coyotes should not be killed. There’s an article on how to make cheese at home and three pages concerning affairs of The Patrons of Husbandry also known as “The Grange.” There’s medical advice, a Young Folks Column and a recipe for getting rid of ants (half full saucer of molasses to which is added a tablespoonful of Paris green, stirred well) (what is Paris green, I ask you?). How about this cake recipe? “One teaspoonful of soda, one cup sour cream, one cup of sugar, one egg. Flavor with lemon. Flour to make a moderately stiff batter, and bake slowly.” Why, the newspaper even has international news. How timely this news is one can only guess but it’s there nonetheless. 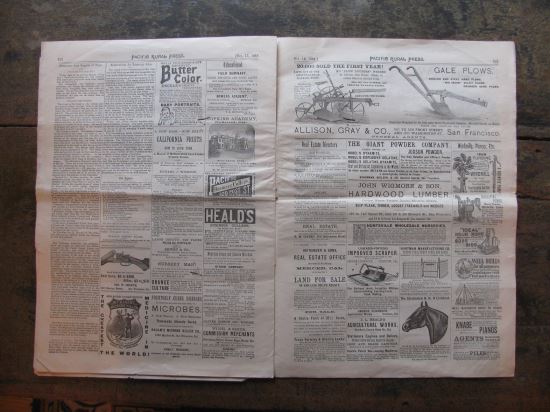 When I read it I see how similar are our interests to the people of 1889. The only differences are our technological advances. Otherwise, we are the same.