Chickens in The Pig Pen

I was explaining some of the problems I was having with my pigs to my daddy. I was stressing and fidgeting, going into great detail about problems. Dad figured I needed to loosen up a little, so when I got done venting, he told me the story of his chickens with the pig.

I laughed until I cried.

First I have to tell you a little of my grandfather. Born in 1906, he grew up in the era of hard times and little money. Your yes meant yes and your no meant no. Your word was backed up with a handshake, and you lived by it. He lived during the last of the gunfighters and Charlie Russell (his dad rode with Charlie Russell, another time maybe), depression, and traveling on horse back. So when they got an animal, any animal, it would be given the utmost care and tended to properly. He stood about 6′ when he recovered from the tree falling on his head. However tall he was, he didn’t quite make 6’5 with his boots on. He weighed in about 230-235. He was big enough to scare everyone, my dad included. He would walk down the street and kids would say wow is your dad big.

So Grampa was a strict man and did not put up with a thing. He put the fear of God into everyone he came across. He was quick tempered and had the muscles and power to back it up. He was honest, hardworking but he didn’t have a lot of give in him. Didn’t back down to anyone. His dad was teaching him to be a gunfighter. He wrestled cows, calves, bulls and horses everyday.

They ran a few head of sheep, mostly cows and a sow she was half wild and just meaner then a snake, and some chickens. Every animal was expected to pay its keep. Well, the eggs kept Gramma going in the kitchen. The sow usually had 10 babies and helped keep the family in meat for the winter.

One day Gramma started to complain about her chickens missing. Every week one of her laying hens would turn up gone. Well with 7 kids, losing an egg a day is bad enough, but an average of 5 a week was terrible. Gramma told Grampa that she had set Dad (the only boy of 7) to watching. See what was killing her chickens. Grampa figured Dad was killing Grammas chickens so he gave him a good talking to. Told him if he (Grampa) heard of any more dead chickens, Dad was going to get a switchin. The day lights were scared out of Dad. All times day and night, whenever there was a commotion around the chicken yard, Dad was sneaking past to see what was after the chickens.

One day there was quite the ruckus at the barnyard, and Dad ran fast as lightning to the pen. He climbed up on that big ol’ wood fence. What he saw made his jaw fall open and eyes grow big. He saw Grampas prize sow chasing that chicken around and around her pen. He figured no way. If she killed that chicken Grampa was going to give him a switchin. His backside was going to be the one to pay. He started screaming and hollering, waving his arms. That sow paid no mind. Finally Dad grabbed a rock and bounced it off her. She noticed but didn’t stop. He got a nice big rock. He was about 8 at the time, so not sure how big is big, but he lopped that rock at the sow when she quit looking. Dad threw that rock so hard hit her right between the eyes. Her eyes turned back into her head and she weebled and wabbled a few times then crashed to the ground. Dad was panic stricken. He was so scared. Now he was going to have to tell Grampa that he saved the chicken but killed his prized sow. He said, “I sat there dancing on the fence praying and just a singing, trying to figure out what to do.”

Pretty soon that ol’ sow came around and got up. She didn’t really just get up; she was laid out flat, then jumped up and landed flat footed on all fours. Her eyes real big and mouth hung open. Looking frantically around to see what hit her. She took one look at that chicken and started to squeal and back away. The chicken got frightened and took off toward the pig. The pig backed up and squealed harder, back tracking to get away from the chicken. Pretty soon that chicken was just a chasing that sow in a circle around and around the pen. Both of them just a runnin’. The pig just squealin’ and the chicken cluckin’. There was so much noise but no dead pig or chicken.

Dad was so happy he was laughing and so excited that he no longer had to tell Grampa about a dead chicken or a dead sow. Then he started to laugh and laugh when he realized that that ol’ pig thought that the chicken is the one that hit her between the eyes and knocked her out. From that day on, Gramma never lost another chicken.

What a story. I can just see my dad on that fence jiggin’ and hoppin’, trying to figure out what to tell Grampa. Then that ol’ sow jumped up off the ground and landed flat footed and scared to death of a chicken.

A secret I learned that day was that not only can pigs be afraid of chickens, but their manure is wonderful for tomatoes. I always wondered how Gramma could get a hundred quarts of tomatoes off 5 or 6 tomato plants. That was with everyone eating them along the way. Dad shared that with me. It was long before miracle grow or some such. This year I planted my toms in the old pig patch. WOW did I ever get the tomatoes. We planted 6 toms of all different kinds. My largest tomato was .78lb and my largest cherry tomato was .4 and the size around as a .50 cent piece. My little grape toms hit the size of a normal cherry tomato. It was a great year.

Add some of my Garden Gourmet to your plot and see what grows for you. 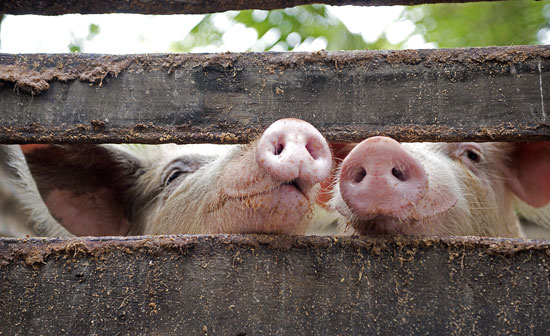 Everyone have a great day.
The Roots and Sprouts
Valerie Root Farm