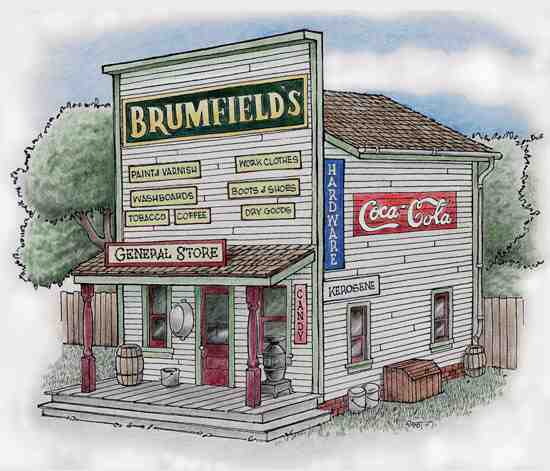 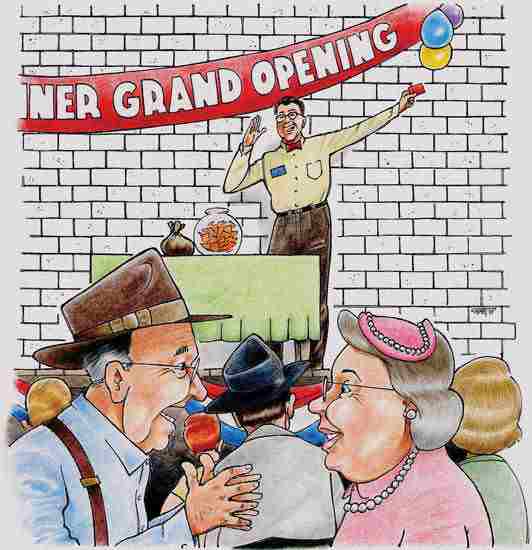 I went to the grocery store yesterday, but that’s not big news. I’m no stranger to grocery stores, but on this occasion, I was transported back in time to Dave Brumfield’s general store in my hometown, in the mid-1950s. Ah, yes … the good old days.

Now before any naysayers get all wound up about the social issues of the time, the myth of the good old days, and the rest of the claptrap relied on to salve consciences, let me say that, in some instances, they are exactly right. To an 8-year-old in my humble village of less than a thousand people, however, social issues meant who your best friend was, and we lived in a different world. There was no daycare, there were parents … and if a kid didn’t have two of ‘em, one of ‘em had died. There was no kindergarten. We spent our first six years at home, being kids, and then we became students. Soccer was something you did to a girl if she wouldn’t leave you alone, and nothing was as pretty as a new baseball. Many of us had jobs before we were 10. In the winter, we ice-skated outside, of all places. In hot weather, we swam in the lake or the river. Summer evenings were spent on the porch, and Friday nights meant watching a free movie in the park.

Back to Dave Brumfield’s general store. Dave was my grandfather’s sister’s husband. The store was on the same lot as their house, at the intersection of their street and Highway 150. The streets didn’t have names, but we knew where everybody lived. The store was small, even to me. Dave stocked things like sugar- and salt-cured hams that hung on strings from nails, lard in buckets, bacon wrapped in burlap, flour in cloth bags, maple syrup in tins that looked like cabins, beef and chickens in tubs of ice, Coca-Cola and 7UP in a water-filled cooler, sugar in paper bags, eggs not in cartons, milk in bottles with 6 inches of cream on top, Barlow pocketknives, Diamond matches, horehound candy, kerosene at 20 cents a gallon, and, once in a while, a catfish or two on ice. Salmon came in cans, a shrimp was somebody little, and nobody would have known what orange roughy was. You could get garden crops in the summer if you were one of the few who didn’t have a garden, canned stuff in the winter, and breakfast cereal year-round – oatmeal or Cream of Wheat if the weather was cold, or Corn Flakes, Rice Krispies, Shredded Wheat, and Wheaties (great for whipping up some quick doughball to go carp fishing) when things were warm.

Dave Brumfield hadn’t been in good health since being wounded in World War I, so when word circulated that a new store was coming to our little town, he was grateful to retire. The rest of us didn’t realize his retirement signaled the end of an era, but it did. You see, the new store was something called an IGA Foodliner. None of us knew what that was, but it sounded awesome. Any grocery store with a name like “Foodliner” had to be something pretty special.

They built it close to our church, after tearing down five or six old houses just to make room for the thing. They even put in a parking lot, for goodness’ sake! There wasn’t a store in town with a parking lot, and this one even had big ol’ tall lights in it. Nothing like this had ever happened before.

Then, one fateful day, it opened. That evening, even though it was within walking distance of home, my granddad drove over. He didn’t want to waste that parking lot.

We approached it in awe. The outside was all lit up, the parking lot was as bright as daylight, and the doors to get into the store actually opened by themselves! Inside, the endless aisles displayed more variety than any of us had ever seen in one spot. Brands we’d never heard of, foods we’d never heard of, racks and shelves higher than a big person’s head! There were meat cases as long as railroad cars, tables piled with fresh fruit, cliffs of canned goods, and mountains of cereals – even one called Sugar Jets. Dozens of things I’d never seen before and absolutely could not live without, abounded in chaotic profusion. Good grief! They even had wheeled transportation, a sort of chromed baby carriage, into which a fevered shopper could dump his or her swag. When my grandmother put some stuff on the counter to pay for it, it moved away from her toward the lady at the cash register all by itself. Old Dave got out while the gettin’ was good. The era had ended. Our sleepy little town had been invaded by selection and convenience.

The next week, the IGA Foodliner had a grand opening on Friday night. The free movie in the park was canceled, as there was no way it could compete. The majority of the parking lot had been roped off, and a stage had been built for a band commissioned to play at the big dance. It wasn’t Bill League and the Rhythm Boys from the American Legion Hall, oh no, but some stellar musicians imported for the fiesta. I recall my grandfather saying that the whole darn town was there, as he registered for the drawing.

The drawing was held near the end of the evening. Minnie Parnell won a $20 gift certificate, our next-door neighbors were awarded a new pressure cooker, Mildred Hyde got a can opener, some other folks won miscellaneous stuff, and candy was tossed into the crowd for the kids. Then came the biggie, the grand prize of 300 silver dollars. The announcer reached into the big glass case, fumbled around for a bit, and withdrew the winning ticket. He studied it for a moment, and finally announced the winner: Frank White.

“Ruth, I won!” my grandfather exclaimed, and my grandmother was simply flabbergasted at their good fortune.

The 300 silver dollars were in a mesh potato sack, and when the guy passed it down into the crowd to my grandfather, the sack broke, scattering coins throughout the throng on the overpopulated parking lot. For the next few minutes, a steady stream of people brought my grandpa money they’d found. When we got home, he counted it three times – 299 silver dollars. The next day, someone stopped him on the street and gave him the last one.

And that is only 300 of the many reasons they call it the good old days.

Being her grandmother’s namesake, woman receives golden spoon purchased in 1904. 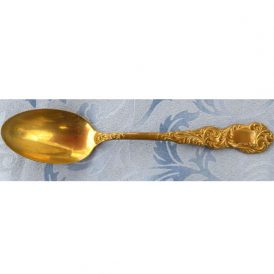