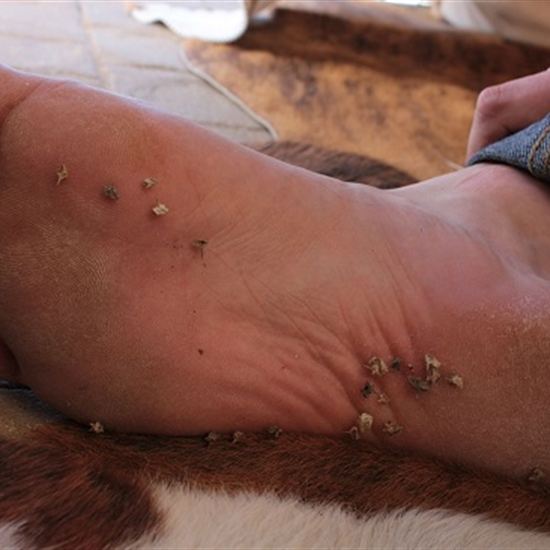 I love going around barefoot. It’s an issue with me. I love the feel of the earth beneath my feet but it makes my feet so very dry to the point that I had to invent a salve that helps and sometimes heals if I remember to apply it nightly. With socks. The other issue is that during this time of year we are always bringing in a Goat’s Head stickers every single day. You should see the tires on my wheelbarrow after I’ve been using it to move split wood from the area where it’s been drying to the place where I’m stacking it. Nasty little buggers.

Thus, I am no longer walking around barefoot outdoors and I probably shouldn’t walk barefoot around the house. But I can’t help myself. Next thing I know… OW! I’ve stepped on one.

The Goat’s Head is also aptly named Puncture Vine and the sticker is called a “goat’s head” because, well, it looks like a goat’s head.

I never saw it in the Midwest when I was growing up. There we stepped on honeybees in the clover and thistles everywhere else. Out here in the dry Central Valley puncture vines grow in abundance. It’s a low-lying, vining plant and at this time of year it develops seeds. Isn’t nature a marvelous thing? Everyday I marvel at how well plants get along. Since they are stationary and can’t spread their seed by mechanical means plants evolve other ways to do what they need to do. They get poisonous or nasty tasting to prevent themselves being consumed out of existence. They make their seeds windborne or digestible by birds and animals and sometimes, as in the case of the Goat’s Head, they make themselves transportable. That is to say, they attach themselves to a hapless victim and hitch a ride somewhere else. Marvelous, right? Yes, marvelous, indeed, until you step on one.

Kind of pretty isn’t it?

Here’s another example of plant ingenuity: A few years back I had a very unpleasant experience with agave. I was trimming agave – a very large agave maybe 4 feet tall like the one pictured – when I carelessly impaled my knee on the tippy top spine of the agave leaf. Pain shot through my knee like a corrosive bullet and I knew I was done for immediately. Two hours later in the emergency room my knee was the size of a melon and I could barely move the joint. Apparently, the agave spine has a substance that gets into the puncture wound and does a number. Don’t mess with me says the agave! I do you good!

The agave won that battle but I won the war when I returned to – very carefully – clip off each and every spine. Take that, you rat! Maybe you can fool with the errant animal but you better not fool with the wily human!

I haven’t figured out how to vanquish the Goat’s Heads for now. In the meantime, I wear shoes and watch where I tread if I’m barefoot. The poor dogs are not so lucky so if I see one going tripod I take a look and sure enough there’s always a goat’s head stuck there waiting for removal. Thank you, human, says the dog! Let’s go around with the hoe and do battle!