Good at Not Falling

Near the warmth of the woodstove we listened raptly as Gramma told stories about life-threatening experiences on the Illinois farm when it was dangerous to go out in a blizzard to take care of animals in the barn. You had to know how to get back to the house. There were stories of men who froze to death because they got lost in the white-out conditions. My Grandpa strung a clothesline from the house to the barn so he could navigate safely.

We kids had a different viewpoint of a blizzard. It was not something to be feared. It was a time of rejoicing! Invariably, school would be cancelled, and we could go out and play after the blizzard had done its worst. The sky would be crystal clear blue and so cold. We blew giant puffs of condensation out of our mouths into the air like steam locomotives, puff, puff, puff, and the snow would be deep and powdery. Sometimes the whole family would go to the timber and pick a strategic slope that seemed clear. Steering your Flexible Flyer sled was not a precision event. Laying on your stomach with your hands on the wood steering bars or sitting up with your feet on them you could avoid tree trunks and unknown obstacles if you were planning ahead, but if you didn’t plan, and you saw something at the last minute, you were toast. 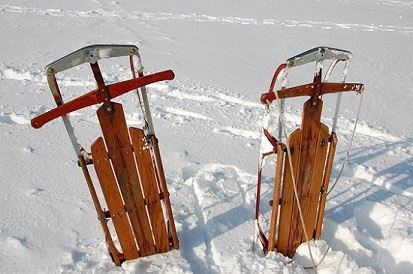 Sometimes we would pile in the car and go sledding on the local golf course. This worked really well, because the golf course was clear of tree trunks and hidden stuff that could spell disaster and injury for the careless. We took our Flexible Flyer sleds, but we also took inflated inner tubes, and once we had a toboggan. The snow depth was perfect. Not too deep, not too shallow. Deep snow is not good for sledding. At the ski lifts in the Sierras’ they tamp down the snow for the skiers and people sledding. The snow in Iowa would not be deeper than a foot and, boy, you could go fast! We kids would be airborne most of the time on those long slopes. A little bump and whoo-wee, up you’d go, sled and all if you were holding on. If you weren’t, you were ejected and flying on your own. I wish I had a video. 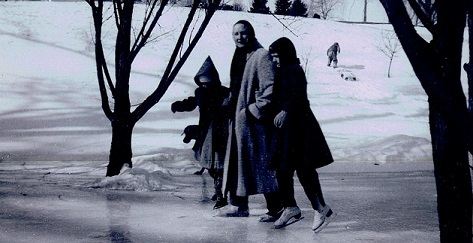 Our Weimaraner dog Heidi (in silhouette), my sister, my mom and me. Photo by R.L. Benoit.

My dad had the brilliant idea to take his tractor with the scraper attached and scoop out a shallow depression out behind our house in the near field. He did it just before he knew it was going to freeze hard and then he let the water hose run to fill the depression with water and make a small skating rink. Then with our classic white figure skates we girls would tentatively swoosh around. My brother would swoosh around on hockey skates, because no self respecting boy would be caught dead in figure skates. We were all right at skating, but it was not very smooth ice, so we never became experts. I mostly got good at not falling.