Those who know me will know what my favorite color is. It’s green. To be more specific: John Deere green.

With limited space at home, there’s very little room for tractors. For now I’m at my limit. In a way, that’s probably a good thing. With the tractors that are there the place already looks like a used implement dealership. How ironic that I point this out, because people have actually pulled into the driveway thinking that they had found a salvage yard right in the middle of town! Once they realize that it’s nothing more that someone’s collection, they leave slightly embarrassed, but in a laughing, good mood. 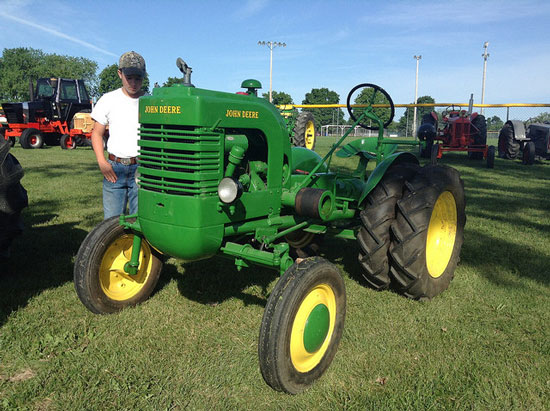 At the end of those days, I do dream about having more tractors. Both of my John Deere B’s seem so lonely among the sea of IH red. I often think about the different John Deere models that I would like to have. The A, M, and 60 are at the top of the list, simply because that is what my grandpa started farming with. Then there are the unique ones, like the model L and the 730 High Crop that I saw at the Mark Twain Old Threshers Reunion this year in Paris, MO. According to the sign, the 730 was one of 609 built in Argentina. Make me wonder how it found its way to the middle of Missouri.

There’s always the one that got away. The G come to mind. My stepdad and I found that one for sale at a salvage yard in Mexico, MO about 20 years ago. It was in great shape and reasonably priced. It had a power block in it. Even though I really wanted to bring it home, my stepdad decided to pass on it. As far as I know the salvage yard is no longer in business, and I’ve spent 20 years wondering what happened to that John Deere G.

What I would really love to have is a John Deere car. You probably think that I’m pulling your leg, right? Well, I’m not. Willard Velie was the maternal grandson of John Deere. Mr. Velie founded the Velie Motors Corporation in 1908. That same year, he started making cars in Moline, IL. The Velie trucks came along later, in 1911. I’m betting that you could’ve walked into any John Deere dealership at the time and ordered A Velie car or truck. As bad luck would have it, production ended in January 1929, after Mr. Velie’s death.

As of 2010, the Official Velie Register shows that only 230 Velies are known to exist. I know the chances of my daydreams coming true are slim, but I can’t help thinking about finding a Velie hid away in a barn. It would look lovely sitting next to my John Deere B. 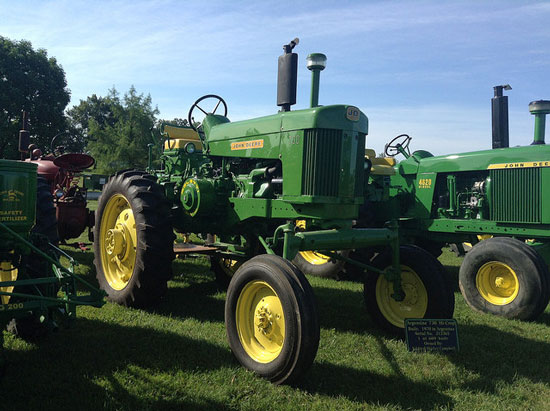