Those of us who grew up on the Great Plains all have stories of the blizzards we have experienced. Most of us take them for granted because we have been through so many. I’ve been thinking a lot about this because of the outrageous weather the eastern part of America has been experiencing.

But what was it like in Gramma’s day when there were no national televised weather reports or even radio? Even when radios were widespread they still didn’t have good weather prediction tools. Just think of how easy it is since the advent of radar then Doppler radar then computers to tell what we might be in for. Imagine how it might be if you really didn’t have any idea what the weather might be that day when you woke up. All you could do was look up and smell the air, or look at the clouds, or feel the wind. You might only have an idea what the day might bring but maybe not even that.

I looked around and found that the word “blizzard” actually originated on the Great Plains during the mid–19th century. They think it might have been derived from the German word “blitzartig,” which means lightning-like. And for any of you who have experienced how fast a blizzard can come on and how powerful it is you might agree that this is just about right.

I was born in Illinois in 1950 and grew up in Iowa. We had blizzards all the time, but when I was young there were radar predictions and later on Doppler radar that had both been developed out of discoveries made during WWII. My mother and grandmother talked about their experiences when there were no prediction tools.

The people who suffered the most from unexpected weather changes were unprepared hunters, ranchers and thousands of cattle in the open country. But people in town suffered, too. There was a story of a boy who died trying to reach a print shop one block away from his home. Another man froze to death in a light linen overcoat with a flyer in his pocket advertising Kansas as the “Italy of America.” A young woman became separated from her family on a half-mile journey and died within an arm’s length of the door of her brother’s house, her hands tangled in her hair.

Maybe one of the worst blizzards in American history was the Children’s Blizzard, so called because of the large number of children that died. A really great book, “The Children’s Blizzard” by David Laskin, goes into great detail of this awful event. Here I paraphrase some anecdotes from the book. 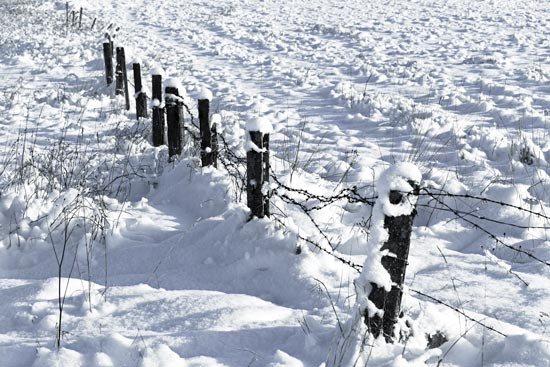 The blizzard struck on an unusually warm January day in 1888. The children had been sent to school in shirtsleeves. It hit the Plains when schools were letting out, and some teachers, new to the Plains, disregarded stories of how dangerous blizzards could be and let their children walk home. Other teachers released their students early, hoping they would arrive home before it got too bad. Instead, temperatures quickly fell to 40 below zero, and 60-mile-per-hour winds with snow as fine as sifted flour reduced visibility to zero.

A teacher with three students became hopelessly lost walking 200 yards to her boarding place, and they spent the night huddled in a haystack. The children died and the teacher lost both feet to amputation. A teacher and her nine students became separated because of the wind. They all died and were not found until the snow had melted months later. An old-timer of the community said, “Look for circling vultures to locate the bodies.”

Another group of schoolchildren and their teacher held hands to travel the 100 yards to a farmhouse. They missed the house by six feet, fell into a small ravine but clambered back out to reach a straw pile, where they all survived the night.

A man survived by keeping his family of eight, one hog, one dog, all his chickens, and four head of cattle in the same room. 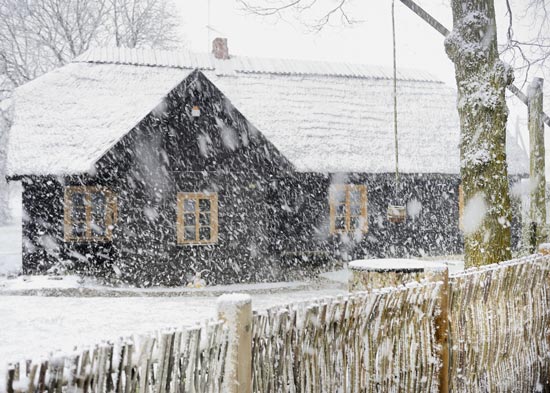 My grandmother was always worried about getting lost on the way to and from the barn. She told me a story she heard of a woman who was checking on the family cow 100 yards from the house and became lost. She tied her shawl to the cow and luckily it lead her home. As a precaution when a snowstorm started, Grampa always tied a clothesline from the house to the barn so if the need arose to feel their way then they could, even when they couldn’t see where they were going.

I was once driving an old International Harvester truck back to Iowa from California. When I stopped in Laramie, Wyoming, on a very cold winter day I talked with the station attendant. In those days all the attendants pumped your gas, cleaned your windshield and checked your oil. On that day he also dispensed some Wyoming advice. He told me always keep a candle and matches in your glove box. If you get stuck in a snow drift, light your candle and crack your window so the flame doesn’t burn up all your oxygen. Then you can wait until help comes. The flame of the candle will keep it just warm enough so you don’t freeze. Luckily I have never had to test that advice, but I’ve always kept a candle and matches in my glove box just the same.

We’re all very fortunate to live in a time where the man on the television announces Severe Weather First! every night before the news comes on, and we can go to our computers and see what we might be in for 10 days in advance. A world without weather technology is one thing I’m not sure I would want to go without while living the homemade life. I guess one lesson we can learn that when living the homemade life, with regard to weather, being over prepared is better than being under prepared.