It is State Tournament time here in Nebraska and Larry is very excited because he and our three sons will make their annual trek to Lincoln to watch the boys’ finals on Saturday night. They always stop and buy snacks to sneak in, eat at HuHot, and have a great time together.

My last post was about how I started playing the historic 6-on-6 Iowa girls’ basketball in the ’50s, and I want to share a favorite memory of that time: The State Tournament! If you read that post, you’ll know our team never made it that far, or very far at all, but we got to go watch! It was an amazing time for us Washta teens, as most of us had never traveled past Cherokee and maybe once or twice a year to Sioux City! I think many of you athletes, girls and boys, will relate to the fun we had!

I’ll never forget when Luanne and I, both eight-graders, were told we could go! The school policy was that the first team and the seniors on the team were given the opportunity each year. We were playing quite regularly as the season progressed, so they invited us, too, and there was some dissension again. I know I was excited, but also overwhelmed and a little scared of the unknown. Think about it; Luanne and I were only 14.

What a blast to get out of school, travel to Des Moines, and stay in Hotel Kirkwood! I had never stayed in a hotel before. We had a chaperone, of course, but she didn’t stay in our rooms, as she probably required sleep. Not us! The way to accomplish this, is to never get in bed. In the five years that I went, I only remember sleeping a little one night as that chaperone and coach came down hard on us.

The hotel couldn’t put us on the same floors with teams that actually played in the tournament, or other visitors, because we were running the halls and stairs all night and having a great time making friends with other teams.

What fun we had during the day! Freedom to roam the streets, shop and eat what we could afford, and be carefree and silly. Never underestimate being silly! I remember eating pizza for the first time. Some of us had pooled more than we could afford for that pizza, were starved, but could hardly down a piece. The whole top was thick, stringy cheese, and nothing like the pizza we eat today. Perhaps it was because we Iowans were only used to beef, corn, potatoes and gravy!

A highlight of each year was to visit the beautiful Iowa State capital and climb the circular stairs to the very top. In those days, you could even continue on the wooden steps into the dome, which was very scary. Years later, when Larry and I took our children there, it was closed off because of bomb threats. Oh, the innocence of our time.

OK, I know you can’t believe that I would do this, but one year, two or three of us dropped water balloons from our hotel window. Besides us, there were a couple quieter girls who happened to still be in the room. Soon we heard a knock on the door, so we hid in the closet. The other girls had to answer the door and face the policeman who bawled them out and gave a stern warning. Their faces were SO red and they weren’t too happy with us. 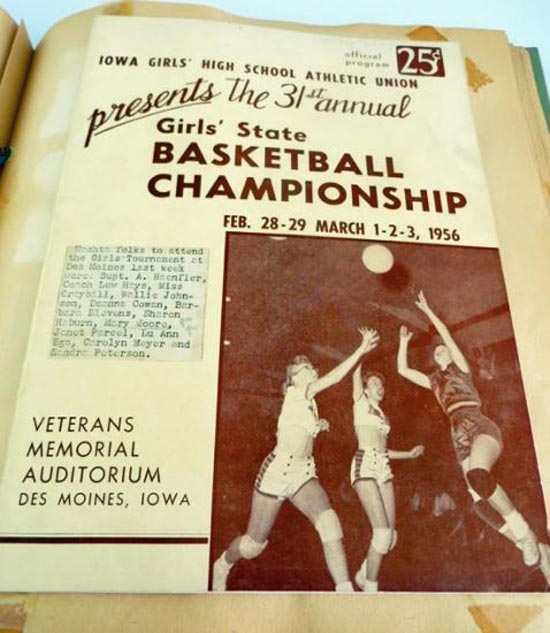 A program from the Girls’ State Basketball Championship the year I was in eighth grade.

The games: Oh, that’s right, we went there for the games! Of course they were exciting, and it was fascinating to see how well the girls played. The thing that actually made me wide-eyed, though, was the overwhelming size of the auditorium, and all the people; it was so far down to the players! Everything about it was new and exhilarating. Contrarily, it was also difficult to stay awake!

I could probably go on for another page or two about the fun we had those five years, but what I’m really hoping is that this post will be a catalyst for all YOUR wonderful memories. If you would like, share one in the comment section for everyone to enjoy. Be sure to click “like” at the top of this blog so I know you read it, and “share” with all your old school buddies! Thanks, and happy reminiscing!

*Visit my post on How and Why You Should Write Your Memories, and leave your stories for your grandchildren.