News Briefs from the Capper’s Farmer May 1929 Issue 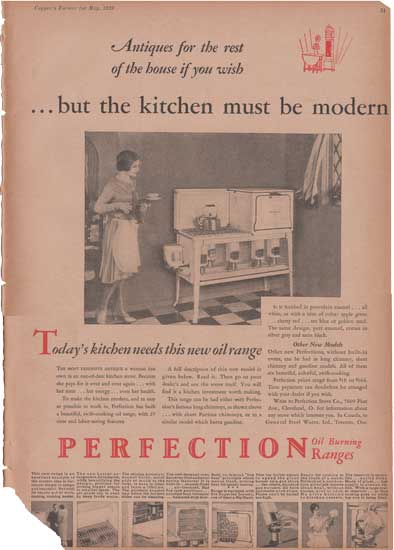 An advertisement for Perfection Oil Burning Ranges from the May 1929 issue of Capper’s Farmer.

Several years ago, John Randall, Linn County, Kansas, decided to try out lime as a means of raising legumes. He applied it and sowed sweet clover in the spring. By June, only a few scattered plants of sweet clover remained, and these did not look healthy.

A soil test was made, and it was found that even though the soil had been limed, it still showed a little acidity, due to the fact that the lime had not dissolved. Mr. Randall decided to let the few plants grow and produce seed.

The next year, Mr. Randall had as fine a stand of sweet clover as anyone could wish. It supplied abundance of pasture until November. The next spring, it was ready by the middle of March, and will carry two head of mature stock an acre until the middle of July or August.

When sweet clover is to be sown, it pays to lime the soil at least six months before putting in the clover seed. 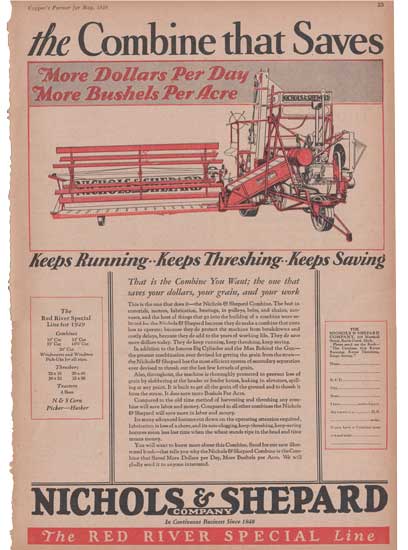 A Nichols & Shepard Company advertisement for combines from the May 1929 issue of Capper’s Farmer.

The treatment included soaking the grain for several hours in cold water in gunnysacks to swell the kernels, then warming it up in 120-degree-Fahrenheit water for one minute. It was then placed in the treatment proper, consisting of water warmed to exactly 129 degrees Fahrenheit (the temperature being maintained by adding steam) for 15 minutes. The grain was then removed and immediately cooled with cold water, taken home, and dried before planting.

Germination varied from 95 to 96 percent. Some fields did not show a single diseased head. In some years, smut has taken 8 to 10 percent in this variety.

Big Profit In His Soys

Peter lodes, Craig County, Oklahoma, planted soybeans in the spring of 1927. The year was favorable, and the beans yielded 24 bushels an acre — an income of $400 for the 5 acres.

Mr. Lodes decided if he could get half that yield in an ordinary year, he could make money from soys, so in 1928, he prepared 40 acres and put in 10 pounds of seed an acre, using his corn planter. The beans were cultivated three times with a corn cultivator and harvested with a mower and rake, because they were too tangled to cut with a binder. Some of the soy straw was sold to the soybean mill for $8 a ton. The beans threshed brought enough to make a total income of $46 an acre, in addition to supplying some excellent roughage for cattle.

Mr. Lodes inoculates his soil, and says it does not pay to try to grow soybeans without it. He will double his acreage in 1929. 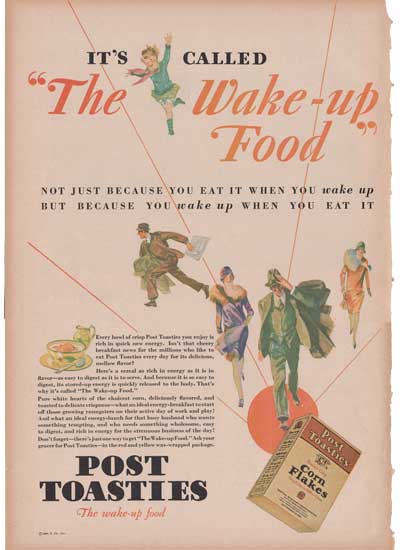 An advertisement for Post Toasties cereal from the May 1929 issue of Capper’s Farmer.

Much of the pasture land on the farm of John Horne, Washita County, Oklahoma, was covered with scrub oak or shinery. In some of the worst thickets, it has almost become necessary to get on one’s hands and knees to get through.

Mr. Horne is using goats to help clear the land. He gets the best results by confining the goats to a few acres at a time and compelling them to keep the bushes stripped clean of all leaves. He cuts down the tallest bushes so the goats can reach the tops.

Tagged with: from the archives | old advertisements