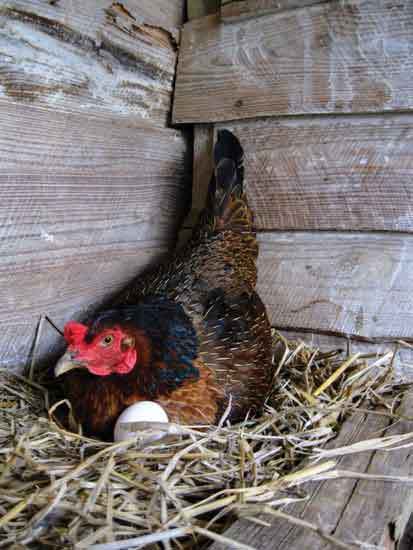 Photo by Getty Images/JenniMaijaHelena
A hen sits in a straw nest with a freshly laid egg.

I remember clearly the first time I heard Harvey Ussery and Pat Foreman speak. It was at the inaugural MOTHER EARTH NEWS Fair in Pennsylvania, and what struck me most was to what degree they had command of the subject: chickens.

We receive queries for topics related to chickens all the time. Oftentimes, it seems like folks might have five, six years of experience raising chickens. And there’s plenty of smart folks who learn a lot in that time. But when you talk to Harvey or Pat, you’re talking to a person who might have more than 30 years of experience raising chickens, and a lot of passion for the subject. It’s night and day between the haves and the have-nots, it seems, and I would have to put myself in the have-not camp; I’ve been raising chickens for about eight years, on and off. I’m not even in the same sport, let alone the same ballpark, as Pat and Harvey.

Harvey’s talk that day led to a larger conversation that eventually ended with a new article idea about deep-litter chicken manure management. It was an awesome article for our pages, in my humble opinion, and it’s a concept that I still practice to this day.

In summation, I don’t feel like there are too many experts out there as equipped to talk you through getting your first batch of chicks as Harvey, and his article, “Anyone Can Raise Chickens” , will give you all the confidence you need to make the leap.

At our house, first we were raising a Hamburg hen and a Rhode Island Red hen, and currently we keep two Buff Orpington hens going into their second year of laying. Flocks of varying sizes have come and gone between when we first got into raising chickens and now. But what’s remained the same is that there’s something incredibly fulfilling about going out each morning, collecting eggs, refilling feed and water, inspecting their house and run, and taking the eggs back inside.

During the winter, my most dogged daily chore is making sure the chickens have fresh water — breaking ice and refilling. Every spring, I’m so happy when the weather warms sufficiently that the daily attention.

Have you ever thought about raising chickens? What’s holding you back? Or, if you’ve made the leap, what’s your favorite part of the experience? Send us a note about your chickens, and a photo if you have one, and we just might feature our favorite flocks in a future issue.