The Seedy Side of Vintage Farm Ephemera

I came across this empty 1908 kohlrabi seed packet at one of our many antique stores here in central Pennsylvania and was smitten enough with its age and design to make the minor purchase. 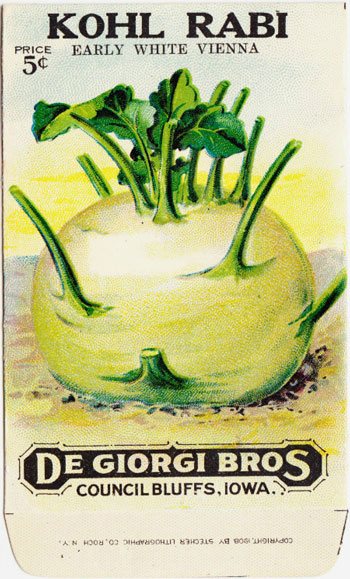 (One of the “benefits” of having an interest in books and ephemera as opposed to antique furniture, artwork or toys is that you can usually browse for hours and still escape with your wallet essentially intact. Of course, that might still leave you having to explain why you paid actual money for a 100-year-old brochure or receipt. But at least it’s less actual money than if you had purchased, say, an 18th century pine blanket chest. )

The five-cent seed packet was sold by De Giorgi Bros of Council Bluffs, Iowa. And the envelope itself was designed by Stecher Lithographic Company of Rochester, New York.

According to “Nineteenth-Century Rochester Fruit and Flower Plates” by Karl Sanford Kabelac, “In the latter half of the nineteenth century, Rochester, New York, was a leading American nursery center. Auxiliary to the nursery businesses, there developed allied enterprises, one of which was the production of colored fruit and flower prints designed to aid nurserymen and their travelling salesmen sell plants.”

Stecher was one of the bigger Rochester companies involved in this enterprise. Again according to Kabelac, Stecher employed about 100 people for its lithographic business in 1888.

Meanwhile, it’s a bit harder to find good information about De Giorgi Bros. An excitingly titled 1928 volume, “The Vegetables of New York,” makes about a dozen references to De Giorgi. There is a description of the September Morn variety of sweet corn:

“This large, many-rowed variety originated with V.H. Neilsen of Council Bluffs, Iowa, as the result of a cross involving Country Gentleman and Stowell’s Evergreen. After 5 years of selection to obtain a stock with straight rows that still retained the depth of kernel characteristic of Country Gentlemen, the variety was transferred to the Di Giorgi Brothers of the same city who introduced it about 1917 and have since continued to list it.”

Some advertising literature from the general time period lists Early White Vienna as the most desirable variety of kohlrabi that was available. According to Wikipedia, the most common varieties of kohlrabi nowadays are White Vienna, Purple Vienna, Grand Duke, Gigante, Purple Danube and White Danube. So it appears that this variety once produced by De Giorgi has persisted.

(Kohlrabi, by the way, translates roughly to “cabbage turnip,” which is an apt description of this root vegetable.)

Here’s a look at the back of the seed envelope… 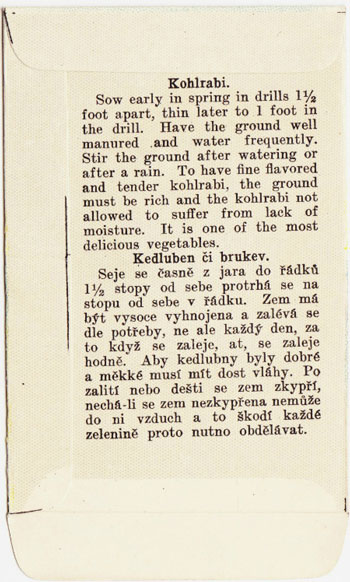 The interesting thing is that the seed instructions are printed in both English and Czechoslovakian. Czech immigrants flooded the Midwest and Upper Midwest during the 19th century and became part of the farming backbone of our nation. And so it was only natural the many products and services were offered with Czech translations. It also made the detailed color illustrations in catalogs and on packaging crucial for those who couldn’t read English but knew what they needed. And that is part of what gave rise to the lithography business in the 19th century.

Share your thoughts about any part of this post — farm ephemera, De Giorgi Bros or Czech-American farming heritage — in the comments section below. There’s so much more that could be expanded upon, and I’d love to hear your thoughts and stories.

A biography of Chris Otto

A 1924 Guide to Perfect Poultry

You don’t have to be a poultry farmer to have an appreciation for the hard work that went into this 1924 edition of The American Standard of Perfection. 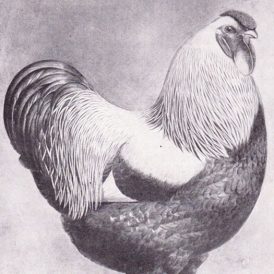