What Does This Mean?

I mentioned the loss of my mother in the blog entry, The Gravel Road of Grieving, and now I have a puzzle that is disturbing to me. Perhaps you can help me find an answer. This morning as I woke I had a strong image, something I’ve never seen before and yet so powerful that it lingered with me all day until I finally sat down at the computer and tried to recreate the image. 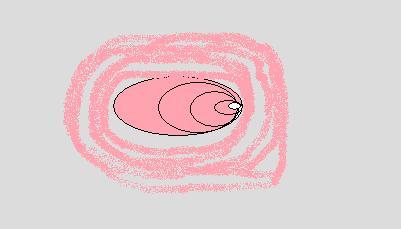 It’s close to what I saw, enough so that we can discuss it. I can’t figure out what it means, if it means anything at all.

Part of my grieving process has been delayed to a nagging doubt that I did not act properly after my mother’s death. Everyone reacts differently to a traumatic occurrence, but my reaction is one that brings me great shame and guilt.

I was sitting by her side, watching her when I realized that she was no longer breathing. I stared at her beautiful face for a long time before I announced to others in the room that she was gone, and then I calmly rose, went to the window and opened it, breathed deeply and went home.

I didn’t realize that I was in shock, denial, refusing to recognize the truth of the matter. I’ve heard of denial, but I honestly didn’t believe that the mind was that powerful; strong enough to wipe away reality. It was several months later when the truth started filtering into my mind and the sobbing, crying and total desperation of truth came through. My precious, wonderful mother was gone but what was worse was the knowledge that I did not react properly. I didn’t say a prayer. I didn’t insure that she made her way to heaven. She was so confused and lost in life suffering from Alzheimer’s, and I wasn’t sure that she found her way. I had horrible thoughts that she was wandering the halls of that hospice house looking for me. I couldn’t sleep, I couldn’t stop crying and I didn’t feel good about myself at all.

I toyed with the idea of finding a psychic who could tell me for sure that she found her way home. I tried to convince myself that anyone as faithful and religious as she would have had a personal escort, surely God sent her an angel to guide her way. But, then I’d remember how confused she was finding her way from the bedroom to her chair in the living room.

In between sobs, cursing myself for being such a derelict daughter, and praying that God would find her and take her on—if she was indeed lost and wandering the halls, I had this dream. This is all I remember of it. As I woke I saw a spiral of circles all in pink, and in the center of the circle was a glittering sparkle, like what is given off children’s sparklers on the 4th of July.

What does it mean?

Plenty of people might say, it means nothing, you were simply waking up and light was filtering through sleepy eyes. Ghost Hunters might say, it was your mother’s spirit reaching out with a message that she went into the spiral circle of light. Dream analysts might say, it’s your subconscious mind’s way of describing the stress you are under.

I have prayed strongly for a confirmation thats she’s okay, at the same time rebuffing myself for not having faith that she was indeed taken care of; was this the sign that I prayed to find?

I’m writing a book about my mother and the aftermath of losing such an important part of me, with a strong emphasis on what to do when you lose a loved one; especially a parent suffering from confusion. (Remember to say your prayers before walking out of that room.) That led to my wondering about the new generations of children who will face the alarming rise in Alzheimer’s. When their parents start passing away will they know how to pray?

We (society as a whole) have taken God out of every step of our lives that we can possible enforce. I grew up saying the Lord’s Prayer and the Pledge of Allegiance in school—that is no longer allowed. I grew up a very altruistic person with little focus on possessions (we were very poor, and we didn’t have the pressure of owning a particular pair of shoes, or a necessary outfit in order to feel positive about ourselves). I never stood in the middle of a mall crying because I couldn’t have something I thought I needed.

I grew up with strong values of home, family and the importance of God, yet at the crucial moment I flaked out—so what is this generation of children going to do? Without that foundation of beliefs how will they manage?

Then I thought about the pending end of the world scenario relating to our destruction due to the collapse of morals in our society. We are an evil society and must be cleansed as in the time of Noah and the flood, when mankind was wiped off the face of the earth for a new beginning. That brought me back to the circles in my head. I seem to be going in circles. Maybe that’s all the dream meant; circles upon circles in a never-ending spiral of pink. And why pink? The dream book says to dream in color means total happiness, but I’m not happy at all, so does it mean that Mom is happy? She’s okay, she’s made her way home and the pink represents her happiness now.

I won’t know the answer to any of these questions until I cross over myself, and I don’t expect you to have the answer. I just wondered what you thought.