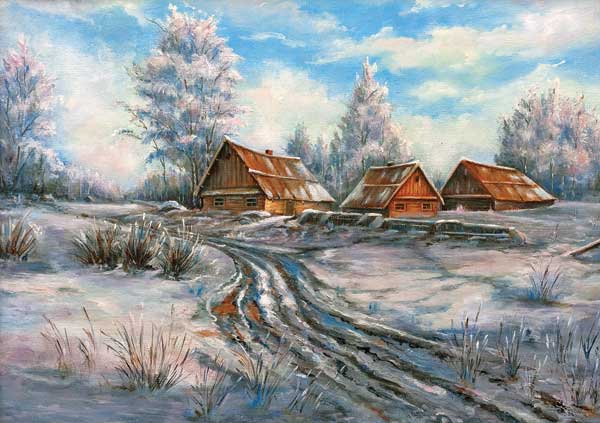 Illustration By dred2010
A winter rural landscape oil painting on canvas of a house and barns.

The year was 1948, and my sister was getting married in New York City. As my parents, my sister, and I made our way to the big city from Pennsylvania, a winter snowstorm made our trip a serious challenge. Dad drove the treacherous roads through the storm — and once experienced a spinout before he could right the car, somehow managing to keep us safe.

Mother was healing from a recent accident in which she sustained a fracture. Nonetheless, she sat beside Dad in the car, her right leg in a cast. My sister Nellie and I sat in the backseat, next to our mother’s crutches. What a brave mother we had, venturing out in the New York City weather in her less-than-perfect condition.

We finally arrived at the church, although somewhat late for the wedding ceremony. We did, however, enjoy the wedding reception, which was filled with laughter and the intermingling of friends and relatives.

While we were busy celebrating my sister’s marriage, we were unaware that the snow was continuing to fall back home, but we would soon find out. The closer we got to home, the roads were riddled with ice ruts.

As Dad made the last turn into our three-quarter-mile-long lane, the car balked and stopped. Dad restarted the car, but it wouldn’t budge. We were stuck in a deep snowdrift. It was well past midnight by this time, and it was still snowing. Dad sat in the car and considered the options.

With the car running so we could use the heater, the car would soon run out of gas. My sister and I had boots in the car, so we could walk the distance if necessary, but due to her injury, Mother couldn’t. Then Dad had an idea.

He left us and began trudging the long lane toward the barn. About an hour later, Dad returned with the tractor, pulling a sled. With some rope, he had rigged a beach chair secured to the slats on the sled. I learned something about my parents’ inventiveness and good humor in the face of danger that day, as my mother returned home in a not-so-lofty chair, but riding like a queen in a winter parade.