Work Is A Good Thing!

After celebrating the Fourth with family, we left our house in good hands, and packed the car to go to the farm for July and August. We took so many extra things that it was difficult for us to get it all together, and nearly impossible for Larry to pack it into the car. It was one of those times when he needed to roll the back windows down in order to stuff more in! We were concerned how I would endure the ride since it was only three weeks past back surgery, but we stopped six times for me to get out and walk a few steps to stretch. Thankfully, although the ride took longer, it went smoothly.

I want to tell you about my healing process because we have amazing bodies. The first few days after surgery, I needed to be helped doing most everything, from getting up or down from any sitting or laying position, and even being turned over in bed. Believe me when I say that back surgery isn’t for sissies! Larry watched the nurses caring for me, and then was able to help me at home. I better add here that he was also a wonderful and patient caregiver! But here is what I thought miraculous: By the end of the week I could do all those things myself!

Being severely limited at first may seem like fun: No cooking, no doing dishes, no cleaning. Actually, no doing anything but watching TV, reading a little, or on the computer. A call or visit from the kids, grandkids, or friends helped immensely, but I had a short attention span. I became a big baby. A real whiner butt. I am used to being active, and I couldn’t stand the boredom. It was worse than the pain.

Larry got so he smiled and said, “Here we go again,” when I started telling him how bored I was. The days were so long! In the evening we would watch a recorded Hallmark movie or one Larry rented. Then about 8:30 or 9:00, I would start to tire and fall apart emotionally from a long day of struggle. That is when he would have to hear me complain with tears, “It is only 9:00! What am I going to do for an hour before it is time to go to bed?!” Our son, Jason, said that he can’t remember having 10 minutes to be bored. It is something to be thankful for!

Eventually, I became a little stronger and the fog started clearing from my brain. Off pain meds and onto Tylenol. Without much help, I made breakfast or lunch! With every new accomplishment, I was excited like a kid. I had noticed in the mirror that my face was set in a permanent expression of determination. Then one day I felt somewhat relaxed and happy! Life was slowly getting back to normal.

Of course, there was some humor now and then. Like when Larry brought me home one of those reacher/grabber thingies late one afternoon because I’m not allowed to bend to the floor and he was having to pick up after me. The next morning, I dropped something on the bathroom floor and I thought, “I’ll not bother Larry and go get my grabber.” It was on the floor! When I told him, we both had one of those long belly laughs!

Getting back to the farm, the very first day Larry brought me in some zucchini and I was able to process them in the Vitamix and freeze a few containers for the future. Then, the next morning, I made zucchini pancakes for breakfast. The following two days, he picked gooseberries and set out the large kettles for me, and I made 23 jars of gooseberry syrup! Life was getting good again!

Do you feel overworked? Too much to do and not enough time to do it? I can’t remember the exact words, but I know that the Bible tells us that work is a good thing. How true. I know it will be quite some time before I’ll complain about it again!

Thanks for listening, friends, and let’s meet here soon. In the meantime, enjoy being able to do whatever is before you. Yes, work is a good thing! 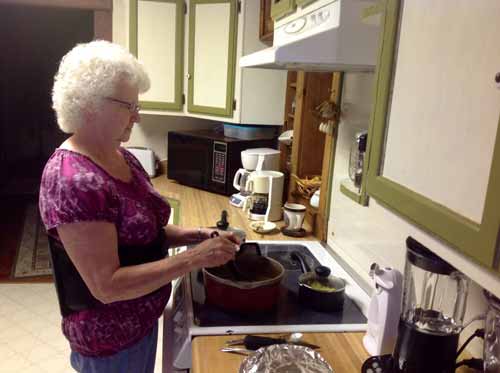 Why would you want to go out to eat when you are able to fix dinner yourself?!