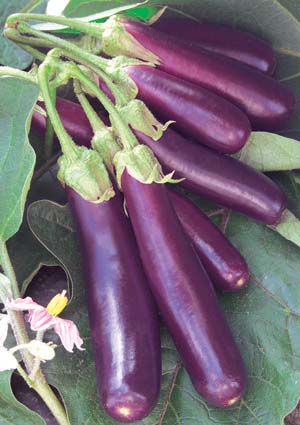 OUTSTANDING: A miniature eggplant called 'Hansel' took top honors in the vegetable category. Because of its smaller size, this eggplant works great in smaller gardens.
Courtesy of All-America Selections
2 / 3 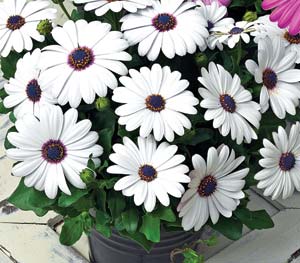 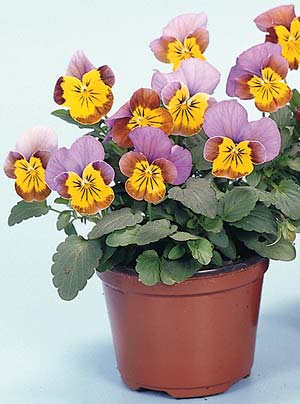 Last year, All-America Selections (AAS) celebrated its 75th anniversary of introducing superior flower and vegetable varieties that thrive in the home garden. In honor of its celebration, AAS chose five past winners that have been stalwarts in the garden since their introduction. These five ‘classics’ were ‘Big Beef’ tomato, ‘Ideal Violet’ dianthus, ‘Majestic Giants Mix’ pansy, ‘Ultra Crimson Star’ petunia and ‘Wave Purple’ petunia.

In 1994, ‘Big Beef’ tomato became an AAS winner. This tomato variety had all the characteristics gardeners want: early production, large size, great taste and disease resistance. It’s a variety that I’m sure has made it into most veggie gardens over the past decade and will continue to grow in the garden for years to come.

‘Ideal Violet’ dianthus was introduced in 1992. This plant, with its single violet blooms, has made quite an impression because of its tolerance to both cold and heat, which can be a problem for those of us gardeners who are blessed with severe temperature fluctuations throughout the seasons. Other dianthus species may not survive through summer or winter in some climates.

‘Ultra Crimson Star’ petunia was the first AAS bedding plant winner in 1988. It demonstrated more superior traits than that of previous petunia varieties, in that it was an early grower and had a stable star pattern on bright, large blooms that don’t need to be pinched to continue looking great.

In my opinion, one of the biggest splashes made by an AAS winner came in 1995, when ‘Wave Purple’ petunia was introduced. My annual plantings have not been boring since. The low-spreading habit of this petunia, coupled with its need for minimal care, made this plant a hit from the start. Bright magenta may not have been the color of choice for every gardener, but it did open the gates for a ‘wave’ of other colored petunias suitable for any taste.

All-America Selections has selected three winners in different categories for 2008. ‘Asti White’ osteospermum was selected as the bedding plant award winner, ‘Skippy XL Plum-Gold’ viola was the cool season winner, and last but not least, the vegetable award goes to the eggplant ‘Hansel.’

‘Asti White’ osteospermum is the first white African daisy that can be grown from seed. Blooms have pure white pedals – 2 to 2½ inches wide – surrounding a blue center. These plants will grow up to 20 inches tall and wide, and they are tolerant of light frosts and dry conditions. The flowers of this plant will also remain open on overcast days, unlike others in the African daisy family.

I sometimes shy away from violas in the garden because of the demure size of their blooms. ‘Skippy XL Plum-Gold’ viola may change my thinking though. This plant reportedly produces a vast amount of 1½-inch-wide blooms that are gold in the center and are surrounded by pastel shades of plum. The gold portion of the flower also includes black whiskers radiating outward, which definitely draws the eye into the bloom. Six-inch-tall plants that will spread to a width of 8 inches make ‘Skippy XL Plum-Gold’ an excellent companion plant for a cool season container planting.

The miniature ‘Hansel’ eggplant has received a big award from All-America Selections. Miniature describes both the fruit and the size of the plant on which it grows. Three-inch-long clusters of fruit develop through the season on a plant that will grow to nearly 3 feet tall and 30 inches wide. The fruit will continue growing if not picked at the 3-inch size and is said to stay tender and not get bitter. The smaller size of this eggplant makes it a perfect fit in vegetable gardens that have limited space. Another nice thing about ‘Hansel’ is that it produces fruit about 10 days earlier than similar eggplant varieties.

These 2008 winners may not become classics for the next All-America Selections anniversary celebration, but as always, they are sure to be a good plant to try in this season’s garden. I know I’m looking forward to testing them out.