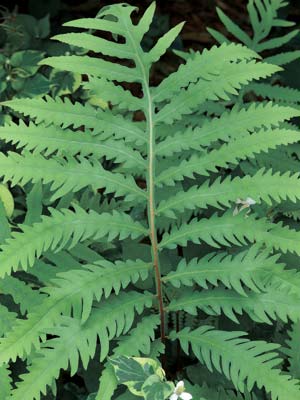 HARDY PLANTS: Hardy ferns from around the world can be found in BBG's Fern Glade garden.
Courtesy of Birmingham Botanical Gardens
2 / 2 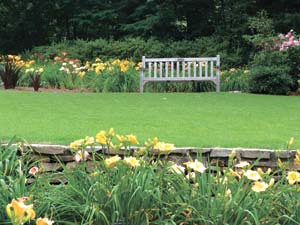 Birmingham Botanical Gardens in Birmingham, Ala., offers visitors a glimpse of a wide variety of plants and flowers. It also offers educational field trips for schoolchildren interested in learning about plants and gardening – hundreds of children visit the gardens each year.

While there are too many specialty gardens within Birmingham Botanical Gardens (BBG) to discuss all of them, here are just a few.

Formally dedicated in 1991, the Abroms Rhododendron Species Garden is a favorite spot for visitors who enjoy reading a book under the rustic swing arbor or in the gazebo. Some of the most uncommon plants in the gardens’ collection can be found and admired here. The evergreen rhododendrons are in peak bloom in late May. However, other species and deciduous azaleas flower before and after the rhododendrons’ main show.

The All-America Selections (AAS) Display Garden consists of seed-grown annuals and bedding plants that have been deemed superior by the AAS team of experts. This garden is typically planted by May 1 and is removed by Oct. 15, but when it’s in bloom, the garden greets visitors with a wondrous blast of color.

The Asian Glade is a lightly shaded garden that features species, cultivars and hybrids of plants from Asia. Several of these plants have close relatives native to the southeastern United States. The garden also contains some little-known plants, including specimens of Bambusa species – bamboos that clump rather than run – as well as a growing collection of Paeonia suffruticosa – the tree peony – which is the national flower of China.

The Bog Garden contains a variety of wetland habitats and native plants adapted to these ecosystems. Dedicated in 1995, it has become the site of both formal and informal environmental educational experiences for visitors of all ages.

Designed in 1962 by Henry E. Teuscher, of Montreal, the BBG Conservatory bears a strong resemblance to Teuscher’s greatest creation at the Montreal Botanical Garden. The central house in the Conservatory is the largest clear span glasshouse in the Southeast, and it shelters a diverse collection of luxuriant tropical plants and understated displays of seasonal hothouse flowers. The Conservatory is home to banana, vanilla, coffee and cacao plants, as well as tropical species of palms, cycads and tree ferns. Also in the Conservatory are the Samford Orchid Display Room, the Camellia House and the Desert House, which is a favorite of children. The Desert House is where unusual and uniquely adapted plants – American agaves, aloes and cacti, Pacific Rim plumerias and euphorbias from Africa – are displayed.

The Crape Myrtle Garden shows what an important role crape myrtles can play in a landscape. The large varieties at BBG provide an intimate and functional canopy in a stone and brick court. The crape myrtle has been designated the official tree of Birmingham. Flowering begins as early as late June and can last through September or October, with the peak bloom somewhere in between. Also in this garden, visitors will enjoy a beautiful display of shade-tolerant groundcovers, bulbs, perennials and container plantings that extend the flowering season.

The Dunn Formal Rose Garden was designed in 1963 and modified in 1988. It is laid out in a classic cross-axial style, and the ‘formal’ designation refers to the garden’s mirror-image symmetry, not to a particular type of rose. Within the garden are tea roses, floribundas, grandifloras, climbers, miniatures and shrubs that bloom from late April until frost. New varieties, such as ‘All That Jazz,’ ‘Dolly Parton’ and ‘Fourth of July’ mingle among old favorites like ‘Peace,’ ‘Chrysler Imperial’ and ‘John F. Kennedy.’ This garden is made up of more than 150 types of hybrid roses, and is an official All-America Rose Selection Display garden, with new introductions being displayed every year.

Designed to make gardening more comfortable and accessible for those with physical disabilities, the Enabling Garden is wheelchair accessible, and has raised planting beds and window box-type planters that eliminate the need for bending and stooping. For years, the Enabling Garden has supported the Horticulture Therapy program. Scientific evidence shows that horticulture therapy improves manual dexterity and provides excellent low-impact exercise for those suffering from many disabling illnesses, and it also provides valuable psychological benefits.

The Fern Glade is home to an extensive, important living collection of hardy ferns from North, Central and South America, Europe, Africa and Asia. This collection illustrates the broad diversity of this plant group, in which sizes vary from miniature to head-high, and growth habits range from clumping, arching evergreen species to running and scrambling deciduous types. Concrete paths have been imprinted with fern fronds and other leaves to create ‘instant fossils.’ The garden is bisected by a tumbling stream that begins high above and drops down over shelves of exposed bedrock, and a boardwalk provides panoramic views. BBG’s Fern Glade is among just six places in the United States designated as an official test site by the Hardy Fern Foundation.

The Herb Terrace consists of raised and terraced beds overflowing with culinary, medicinal, aromatic and cosmetic herbs. Visitors can ‘scratch ‘n’ sniff’ to experience the sensational world of herbs. The garden features exotic fragrances and tastes of faraway cultures, as well as old favorites like rosemary and thyme.

Daylilies are the backbone of the Jemison Lily Garden, in which their multiple hues and forms create a kaleidoscope of color in June and July. New introductions are featured when possible, and are blended with hardy asparagus, Asiatic lilies, angel lilies, yuccas, rain lilies and canna lilies. 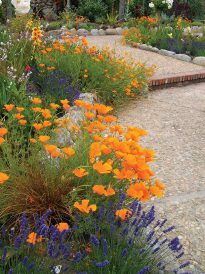 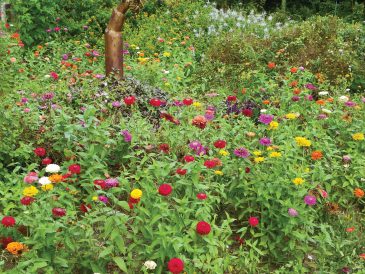