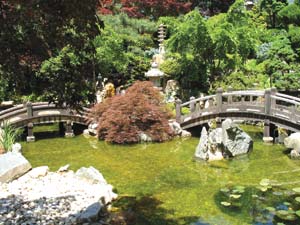 SERENE: The Japanese-style garden is beautiful and relaxing.
B. Waibel/Hillwood Estate, Museum & Gardens
2 / 2 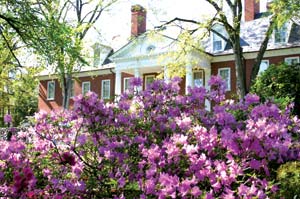 LOVELY LANDSCAPE: The south side of the mansion overlooks the Lunar Lawn, which is adorned with azaleas in spring.
B. Waibel/Hillwood Estate, Museum & Gardens
❮ ❯

When Mrs. Post purchased the property in 1955, she decided her home would some day be a public museum and gardens. She created pleasure gardens, where guests could relax and enjoy the beauty.

The whole estate, including the mansion, which was originally designed in 1926, underwent renovation and redesign when Mrs. Post took ownership. Terraces and porches were added on all sides of the mansion, creating easy access to the outdoors, and she had the gardens designed to serve as outdoor extensions of the mansion’s interiors.

The property includes 12 acres of formal gardens and 13 acres of native woodland. Mrs. Post hired landscape architects and designers to turn the gardens into outdoor ‘rooms’ enclosed by hedges or large plantings. Each garden contains statues, fountains and pools. The gardens offer magnificent color in spring and fall. More than 3,000 azaleas bloom from April through May, as well as hundreds of rhododendron, lilacs and spirea. Blooming redbud, cherry, dogwood, magnolia and crabapple trees provide splashes of color above visitors’ heads, while primroses, pansies, tulips, daffodils and forget-me-nots draw attention to the ground.

Mrs. Post put fresh flowers throughout the mansion, in which she lived until she died in 1973. To provide an endless source of fresh flowers, she established a cutting garden and added greenhouses. Today, the greenhouses are home to her collection of more than 2,000 orchids, and fresh flowers still grace the rooms of the mansion.

Rose garden – Mrs. Post wanted to create a rose garden where a wooden pergola draped with climbing roses was already established. The rose garden was built in a circular shape so it would join the curving pergola.

A round bed in the center of the garden is the site of Mrs. Post’s memorial monument. Four crown-shaped beds and eight crescent-shaped beds are situated along the outside edge, and benches are placed under the shade of the pergola, where guests can stop and relax. Each bed offers a different variety of floribunda roses, along with the climbing roses on the pergola. Sweet alyssum lines the edges and creates a wonderful fragrance.

French parterre – This was one of Mrs. Post’s favorite gardens. When she purchased the property, the French parterre garden, which was originally designed more than 50 years ago, showed severe signs of age, so she had it restored. She installed a new drainage system, waterworks and limestone features. Next, glass tile was brought in from Mexico and was relaid in the pools. The sculptures in the garden also received restoration treatment.

The garden features 18th-century white marble sphinxes, 19th-century French limestone urns from Paris, and a terra-cotta replica of a marble Diana sculpture at the Louvre. The original swan fountain, which was severely weathered, was replaced with a replica made of a more durable pink marble. Azaleas, arbor vitae, juniper and yew grow in terrace beds and along the balustrade, and the entire garden is enclosed within a wall of English ivy.

Japanese-style garden – This is one of the last remaining gardens featuring examples of the type of gardens influenced by the reintroduction of the Japanese culture to America during the 1950s. The designer blended traditional Japanese architecture and design with the practicality of American tastes.

The garden layout portrays the fountainhead of a mountain stream, which cascades from a forest of evergreens and pours into ponds connected by streams and waterfalls, and eventually ends in a lake. More than 500 boulders create an illusion of a rocky mountainside. Paths and bridges allow visitors to go from one side of the garden to the other.

Traditional Japanese trees and shrubs are blended with plants that grow in the woodlands bordering the garden. Lotus and waterlilies float in a pool, and Japanese iris line the garden’s edges.

Greenhouses and cutting garden – When Mrs. Post took possession of Hillwood, there was a small greenhouse on the grounds, but she had a large collection of tropical orchids, so she added four more greenhouses, each with a different climate so she could grow a variety of species and hybrid orchids. Eventually a sixth was added.

A cutting garden was also created to provide blooms that could be cut and used in arrangements to be displayed in the rooms of the mansion.

Lunar lawn – Mrs. Post had a large, crescent-shaped lawn created. Built along the walk are large beds filled with spring-flowering trees and underplanted with azaleas, camellias, lilacs, spirea and rhododendron. Conifers and hollies add to the explosion of color, and a broad flowerbed filled with tulips and pansies edges the lunar lawn. The beds are filled with annuals each summer, and in fall, thousands of chrysanthemums bloom.

The lunar lawn also features a gift Mrs. Post received for her 75th birthday from her staff – a large flagpole topped with a golden eagle in flight, carrying the Stars and Stripes. At the edge of the terrace, a lion made of stone reclines regally.

Pet cemetery – Mrs. Post built this garden in a wooded area as a private place for remembrance of the pets who gave her great pleasure through the years. The garden has markers bearing the names of each pet, and they are set in beds of plants that emulate the mood of the garden, including weeping dogwoods and forget-me-nots. Dog statues adorn each corner of the cemetery entrance.

Friendship Walk – This garden, which was dedicated in October 1957, was a gift from four of Mrs. Post’s closest friends, who worked with the architect and gardener to design a garden they felt was worthy of Mrs. Post’s generosity to others. The theme of the garden is ‘Friendship outstays the hurrying flight of years and aye abides through laughter and through tears.’ It is carved in Italian serpentine marble and marks the terrace end of the walk.

HillwoodMuseum – Mrs. Post was an art collector, and the museum features her collection of 18th- and 19th-century Russian Imperial art, as well as her 18th-century French decorative arts.