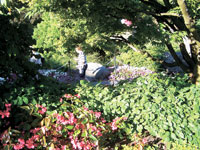 A SCENIC STROLL: The beautifully maintained flower garden at Queen Elizabeth Park, located in Vancouver, British Columbia, is a popular attraction for visitors.
2 / 2 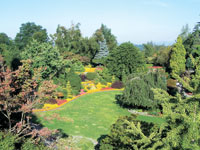 LUSH LANDSCAPE: Nearly 6 million people come to the park each year to enjoy sights such as the park’s sunken garden, which provides a colorful view worthy of a postcard.
❮ ❯

A Canadian site that was once a volcano and later became a landscape scarred by rock quarrying has been transformed today into a 131-acre garden park that attracts nearly 6 million visitors a year. Located on Little Mountain – the highest point in Vancouver, British Columbia, at 500 feet – Queen Elizabeth Park is a beautiful public park noted for the quality of its plantings.

At the turn of the 20th century, the former volcano of Little Mountain was quarried for rock to build Vancouver’s roadways. In 1930, the B.C. Tulip Association proposed turning the then-abandoned quarries into sunken gardens, and the Vancouver Park Board took over the site. In 1939, the park was dedicated by King George VI and Queen Elizabeth (the late mother of the present Queen Elizabeth), who were visiting from England.

The park’s high vantage point provides wide vistas that reach distant mountains and islands and across Vancouver. Another striking sight is provided by the Bloedel Floral Conservatory, a domed greenhouse on the grounds. Its exterior looks a bit like a submerged Epcot Center rising from the ground, and inside, it houses a wonderful selection of tropical birds and a wide variety of plants of different climatic zones.

The conservatory was made possible by a $1.25 million donation from philanthropist Prentice Bloedel, which also brought to the site its open reservoirs, covered walkways, lighted fountains, and a sculpture by modern artist Henry Moore.