On The Garden Path: The Botanic Garden of Smith College 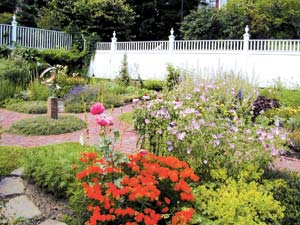 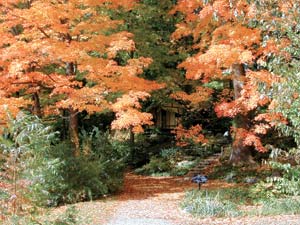 SCENIC STROLL: It’s a scenic stroll along the path to the tea hut at the Japanese Garden for Reflection and Contemplation, which is built into a wooded slope overlooking Paradise Pond.
Copyright Smith College Botanic Garden
❮ ❯

A botanical garden is defined as a collection of plants scientifically ordered and maintained, documented and labeled for public education, research and enjoyment.

Smith College, in Northampton, Mass., was founded in 1871, and since opening, it has provided women an education of uncompromising quality.

In 1872, the college incorporated the study of plants into its academic curriculum. Now, the 127 acres of gardens and arboretum of the college combine the best of art and science.

The Botanic Garden includes thousands of plants on its 150-acre campus. It also features a collection of approximately 60,000 pressed herbarium specimens available for research.

Smith College hired the firm of Olmsted, Olmsted and Eliot in the 1880s to develop a landscape theme to keep up with the growth of the college. The firm’s senior member, Frederick Law Olmsted, is best known for designing New York City’s Central Park, as well as the Boston park system.

In 1893, the firm came up with a plan to curve the drives and walkways at the garden, as well as to create open spaces to showcase specimen trees and place vistas overlooking Paradise Pond. The plan also called for diverse trees, shrubs and herbs, as well as aquatic and marsh plants to be incorporated into the landscape. In May of the following year, William Francis Ganong was appointed professor of botany and director of the Botanic Garden – positions he held until retiring in 1932. Under his leadership, the garden formally took shape. That same summer, Edward J. Canning was hired as head gardener. Together, Ganong and Canning expanded the Lyman Plant House, built a rock garden, turned the entire campus into an arboretum, and reworked the herbaceous plant beds into a systematics garden.

In 1921, the college acquired the Capen School, which further enhanced the garden. When horticulturist William I. P. Campbell was hired in 1937, he joined forces with the college’s landscape architect, Dorothy May Anderson, and they expanded the existing campus plan. One of the first things they did was to renovate and expand the Rock Garden. Campbell worked for Smith College for 34 years, and his legacy continues on, because his work is still visible in the campus’ landscape.

In 1952, Blakeslee Range greenhouses were added to the conservatory complex, in an effort to further chromosomal research by geneticist Albert F. Blakeslee, who joined the team at Smith in 1942. Gregory D. Armstrong was appointed director of the Botanic Garden in 1971, and he organized and oversaw a major expansion of the Lyman Plant House, which was completed in 1981.

Richard H. Munson, who guided the establishment of the Japanese Garden for Reflection and Contemplation, was hired in 1985 to direct the garden. Before leaving the college in 1995, Munson initiated a master-planning project for the garden. The following year, Kim E. Tripp stepped in as director and was with the college until 1999. In 2000, Michael Marcotrigiano took over as director of the Botanic Garden, just in time to oversee the renovation and restoration of the Lyman Plant House.

Visit the Botanic Garden of Smith College for more information. 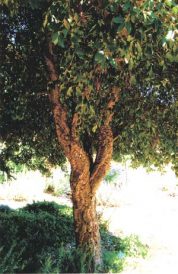 The Chicago Botanic Garden is a diverse display of flowers. Midwest flowers, many rare ones, along with foliage from around the world are displayed. 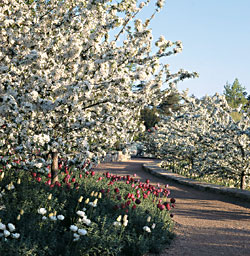 The International Peace Garden: A Symbol of Friendship

The International Peace Garden in Dunseith, North Dakota, is a 2,339-acre botanical garden, nestled on the U.S. and Canadian border. It is a lasting symbol of friendship and peace between the two countries. 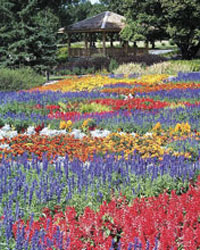