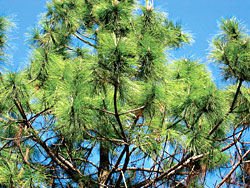 STATELY PINE TREE: Pine wilt was found in Kansas more than 25 years ago, and it is a growing problem that wreaks havoc on many of our pine trees.

I would bet that a large percentage of CAPPER’S readers lost an American elm in the last several decades, due to Dutch elm disease. There are still some old stalwarts scattered across the country that missed being infected or had a resistance to the disease, but what was once a tree for every garden has pretty much disappeared from the landscape.

Now is the time of year gardeners in the Midwest start to see the devastating effects of a similar problem that is wreaking havoc on many of our pine trees: Pine wilt.

Pine wilt was first found in Kansas more than 25 years ago, but as each year goes by, the problem spreads and larger numbers of pines are lost each year. The malady is severe among the Scotch pine species, but has also shown up in Austrian and White pines.

Like Dutch elm disease, insects spread pine wilt. A bark beetle, called the pine sawyer, infects the pine tree’s system with microscopic nematodes, or for lack of a better term, tiny worms that rapidly reproduce. The rapidly growing population actually grows to a point that the organisms block off all of the conductive tissue of the tree, which causes the tree to die quickly.

Since there aren’t any chemical measures available to control this problem, it’s important to understand the life cycle of the insects involved, in order to do our best to decrease the crisis by cultural methods.

The pine sawyer lays its eggs on the pine trees, and the hatched larvae feed under the bark until they mature into the adult insect. In late spring, the adults emerge and fly off to feed on the shoots of other pines. If the pine sawyer emerges from a nematode-infected pine, the nematode will hitch a ride and enter a new tree via the wound and mouth parts of the sawyer feeding on the tree.

The feeding of the sawyer occurs around late spring, and the nematode population grows so rapidly that in four to five weeks the nematode can spread throughout the tree and begin to block all of the resin flow. This is why the disease begins to show up in the late summer months.

The pine sawyer is attracted to pines that are stressed from either disease or dry conditions. Keep your pine trees in good condition by fertilizing and watering them, which can help protect the trees from being visited by this insect.

If you have a pine tree that has succumbed to this problem, it’s important that the tree is removed before the adults emerge in May or June. This will help ensure that surrounding trees are not infected from those same insects. Researchers recommend that the tree be removed as close as possible to the soil level, or below it, to eliminate the possibility that any remaining eggs can emerge from the infected tree.

When a tree is affected by pine wilt, the plant has a rapid browning of the needles throughout the tree. There is another circumstance that happens around this time of year that often causes great concern for gardeners who are worried about a particular pine tree. But fortunately, this is a natural occurrence.

During the fall months, pine trees naturally shed older needles. Some trees shed two-year-old needles, while other species drop the three-year-old needles. This shedding can be alarming, since the older needles seem to turn brown almost all at once. You can be relieved if you notice that the needles are interior needles. Pine wilt takes all of the needles, and other fungal diseases seem to prefer the new season’s growth, which would be on the end of the branches.

Unfortunately, there is no relief in sight for protecting susceptible pines, such as the Scotch, from pine wilt. However, when planting for the future, select resistant varieties of pines that your area extension office can recommend, as well as spruce and juniper varieties that can create a similar effect for your landscape. And as we learned from the American elm that was once heavily planted, and now the Scotch pine, planting a variety of species is important, in order to make sure that a new disease won’t leave us with a barren landscape.