Post-Vacation Blooms in the Garden

In Carol Deppe’s marvelous book, The Resilient Gardener, she has a gracious way of giving both herself and her readers permission to have a less than perfect garden. She begins her book with a story about tending her ill mother for 10 years, and how her garden both sustained them through her difficult time and also at times was a burden. “Hard times happen” is her summary of what kind of gardening she prepared for following this decade. Wisely she prepared for the oops! in life.

Inevitably in our garden, “life happens,” which is my way of viewing what she so beautifully said. A recent example of this is that my husband and I had a 16-day Yukon vacation in the middle of July. Here in our zone 6 Pennsylvania garden, many of those 16 days were 90+ degrees with abundant rain. The consequence upon our return was a backyard overflowing with morning glory vines crawling and sprawling over everything, from rose bushes to the raspberry patch. Three garbage cans full later, the morning glory “volunteers” and a few others that contained seeds not fit for the compost pile were on their way out. That is only the beginning of the needed weeding that still waits.

“Life happens” of course not only means the “volunteers” and other issues that make their less than wonderful presence known, but also the beauty and abundance of life in our organic garden. The flip side of the morning glories is the abundant flowering we arrived back to. One of our native plant gardens sprawls along the back fence, which is a semi-shaded southern exposure not fit much for vegetable production. The perennial sunflowers were in full school-bus-yellow bloom, as well as two varieties of Black-eyed Susans, the Jerusalem artichokes, and much to my amazement since they are still entrenched in the holding container waiting to be planted, the cup plants. Combined with the white from some daisy-like wanted volunteers, the backyard was by far the prettiest it has been all summer. 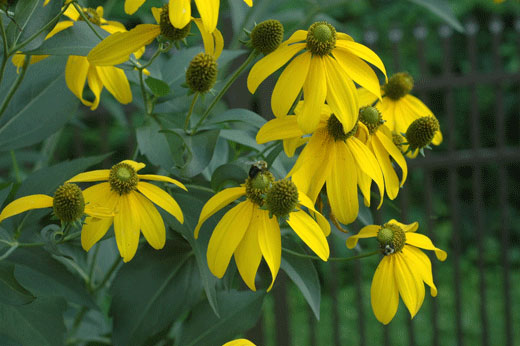 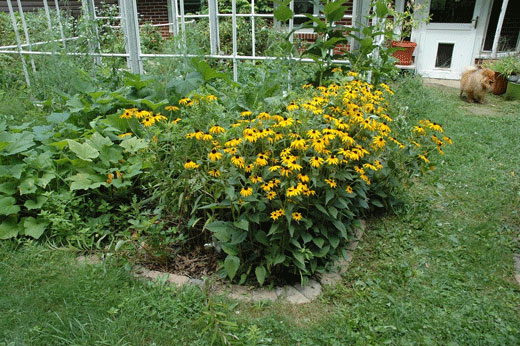 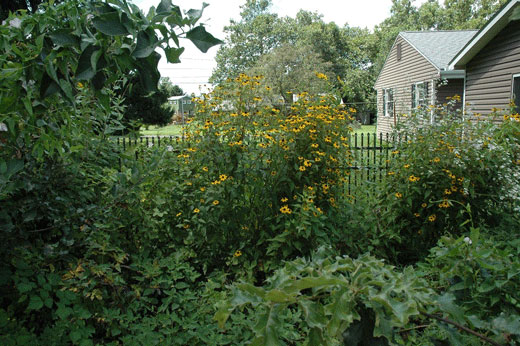 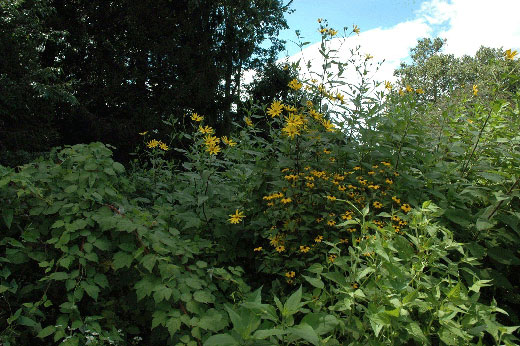 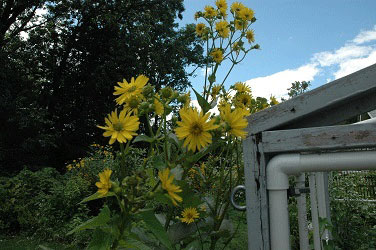 The cup plant (Silphium perfoliatum) is a native American prairie perennial, which grows 5-10 feet tall in full sun to partial shade and attracts birds and pollinators. It is perfect for the back end of our east native plant garden. I began growing them from seed from Seed Savers Exchange last year. Prolific bee and butterfly attractors already, they are gracing the non-heated greenhouse frame from the 9-year-old, awaiting-replacement-this-fall greenhouse that my father kindly made me. There is a very nice description of the cup plant and its pollinators at http://www.illinoiswildflowers.info/prairie/plantx/cupplantx.htm. The cup plant derives its name from the shape of its leaves, which come together to form cups along the stem. These collect water and allow birds and insects something other than your bird bath to drink out of. I am looking forward to getting them planted after I get the fall garden planted and enough weeding done to find a space for them!