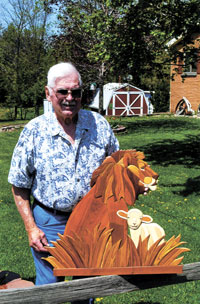 ARTISTIC WOODWORK: Bob Pike, of Pavilion, N.Y., shows off one of his popular intarsia items, The Lion and Lamb.
2 / 3

MADE WITH LOVE: Bob Pike’s casket features an intarsia piece that includes a tree with his and his wife’s initials carved inside a heart.
3 / 3

ARTISTIC WOODWORK: His Cats in Charge piece is a favorite among cat lovers.
❮ ❯

Bob Pike always wanted to build something big, so it made sense that he spent most of his work life in construction. But after retiring, he felt the desire to build something new. That something would come in the form of artistic woodworking projects that bring joy to both the 80-year-old craftsman and to those he loves.

When he retired in 1990, Pike found no shortage of things to do. Living with his wife, Pearl, on their two acres of country in Pavilion, N.Y., they gardened, went camping, and spent time with their four children and several grandchildren. Still, Pike longed to build something new.

Then one day he was looking­ through a woodworking magazine and discovered the art of intarsia, a method of decorating a surface with inlaid patterns of wood mo­saic. Pike ordered his first pattern in October 1991, and since then has crafted hundreds of items in his basement.

Because Pike had worked in construction, his wife was used to him being gone for long stretches. Now, with his newfound hobby, he began spending six hours or more per day in his basement workshop.

The daily cacophony of sanders, saws and dust collectors fills the house as Pike works. His wife is tolerant of the inconvenience and proud of her husband’s projects. She enjoys showing off his work at art shows. Friends and family receive gift pieces on special occasions.

The first piece Pike made was a parrot on a perch, which took 20 hours to finish. Later, he was able to produce the same piece in just over 10 hours. The largest project he has completed is a 72-inch-by-30-inch tiger made with 400 pieces of wood, which took 97 hours to complete.

In 2001, Pike embarked on a different sort of project that didn’t meet with the usual enthusiasm from his wife and family. He decided to build his own casket.

Pike purchased the finest black walnut available, along with solid brass fittings, and he crafted a casket with some special touches. In the lid, he created a small drawer for the Bible he reads daily. On the inside of the top section, he built in a large intarsia piece that depicts a peaceful scene in the woods, with a large tree in the foreground. As a sign of his love for his wife, a heart is carved on the tree, along with the couple’s initials.

When his wife saw the casket, she decided she wanted one, too. She no longer thought the casket creepy – it was a monument to their 53 years of married life together.

Her husband gave her many options for her casket. She selected aromatic cedar wood for it, and different colors of silk for the interior. Her casket, too, has a tree bearing a carved heart – this time with her initials preceding her husband’s.

Everyone agrees that the Pikes will be going in style when the time comes. In the meantime, their caskets are stored in the basement, while the couple continues to en­joy retirement.

Extend the life of old worn clothes by patching with fabric from another recycled garment and embellish with embroidery for a fashionable patch. 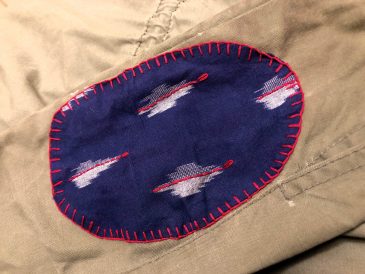 Share your creativity by gathering old wood planks from around the farm to create a charming rustic upcycled barn quilt. 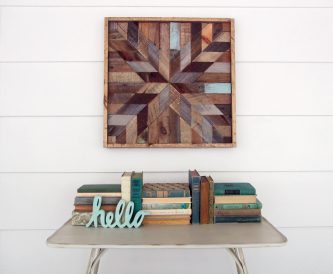 Learn how you can protect your clothes and hands with this apron and potholder, fashioned in a mix-and-match style. 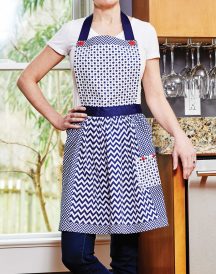