Starting From Scratch: The Story of the Hardman Family Farm

My grandparents, John Milton Hardman and Martha Isabell Hardman, came to Kansas with four children from Milton, Iowa, in 1878 and homesteaded south of Lenora in Graham County. They built a sod house with a cellar beneath. They planted an orchard of apples and pears and planted garden vegetables and potatoes.

They farmed corn and sorghum and had a herd of milk cows. They were successful, with all the family working and sharing the work of the family farm.

As their family was growing, they built a stone house with three large rooms. From 1879 to 1890 five boys were born, making nine living children in the family.

My grandfather kept and raised driving horses. He owned a breeding horse called a stud. Each son received a buggy and team of horses as they grew up, for buggies, surreys, spring wagons and plain old wagons were the transportation of the day. My grandfather also held stud services for horses in the county, as everyone raised horses to drive and work. In addition to his stud service, Grandpa then milked a few cows, gardened and turned to spending much of his time with his hobby of promoting perpetual motion.

By this time they had built a two-story five-bedroom house with a full basement. It was there that my grandpa began to work with wood to build a contraption for perpetual motion by air and balance. No one was allowed in this area.

Grandpa would allow me to sit on the cellar steps. He often joined me and would tell me of his grandpa and grandma, Peter and Margaret Hardman, who came from Germany after leaving England because of a family disagreement. He also spoke of Civil War experiences and his army friends who also homesteaded in Graham County.

In the early days my grandparents belonged to the Lenora Congregational Church. Later neighbors organized a country Sunday School held at Prairie Dell Country Schoolhouse for many years.

As my grandparents grew older they moved to Lenora to live the rest of their lives. Today the homestead is still owned by the Hardman family.

Training, Showing and Learning to Ride a Horse

Learning to ride a horse the right way is an essential part of owning a horse and being able to enjoy the most of your time with your animal. 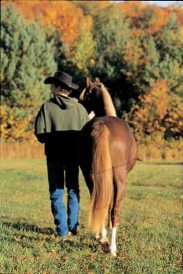