I think that my daughter is just about the sweetest thing in Creation. When I was whooping and hollering and doing the happy dance around the house after finding out that I get to write a newspaper column for a local paper, she said “Mommy, what’s wrong?”

“I’m going to get published in the paper!” I hollered. (Of course, I’m leaving out many more exclamation points!)

Thinking of her reminds me of the night of her parent-teacher conference last fall. Since it was my first PT conference, I dressed up a little bit (nice jeans, nice shirt, you know the drill). We were on the way out the door to take the kids next door for our neighbors to look after while we were gone. I looked out to see that one of my horses (Aurora) had her head stuck under the fence in search of more green goodness. Intending to shoo her back in, I walked down and raised my arms. She raised her neck … AND the fence. She then proceeded to walk straight through. 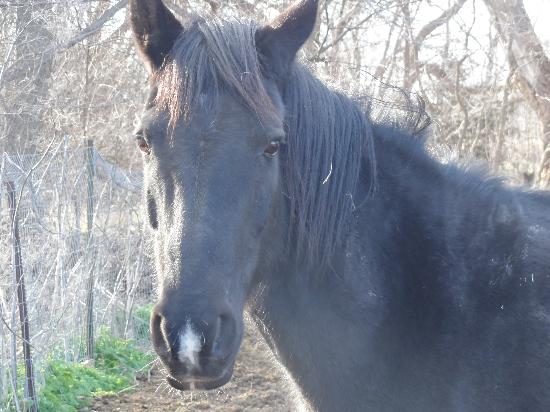 With a sigh, I went to the barn to get a halter and lead rope. That was a MISTAKE. Aurora took one look at them and took off down the road at a dead run. Mind you, she’s a gorgeous horse. She’s even more gorgeous when she runs, but when it’s away from you down the road, it’s not so pretty. I was trying to get the kids to go get my husband to help chase her down. They were more concerned with telling me that my horse was out. My intrepid husband finally made it outside after hearing all the commotion, so I shoved the halter and rope at him and told him to try to keep her in sight. He jogged away while I trampled after her too, trying to cut her off.

Luckily, my neighbors had seen her charge by. Barb came to corral the kids, while Ralph fired up his trusty Rhino. The last thing I saw was Scott climbing into the Rhino with Ralph. The guys tore off in hot pursuit. I was going back to get a bucket of oats to lure her with when it dawned on me: what if Aces  figures out the same thing? I grabbed a few pieces of cattle panel and baling twine to shore up the fence for a temporary fix. Then I thought “I need to call the teacher so she knows we won’t be on time!” Well, I couldn’t find her number, so I did some calling around and found a way to get a message to her. Then I had to rearrange the gates so that we could bring my errant equine (provided that we could find her) into the pen without losing my other one, who was running the fence and whinnying at the top of her lungs.

Finally, I got the oats and started trudging down the road. I couldn’t see hide nor hair of Scott or Ralph. And here we were, looking for a black horse at dusk. I was calling her, rattling the bucket, and wishing I’d thought to put on a jacket. Then I saw headlights in the field near the next mile road. They were weaving erratically, stopping, starting, and bobbing. After deciding that it couldn’t be a drunk driver, I was pretty sure it was the guys. “Oh good,” I thought with a sigh of relief. “They’re herding her back.” I didn’t know it was just Ralph until my mare got close enough to hear the oats. Scott (with the lead rope and halter) was nowhere in sight. Aurora seemed glad to see me … or maybe it was just the oats.

Well, what’s a Fearless Farm Frau to do at that point? Walk home and keep rattling, of course. Ralph followed us in the Rhino to light our way since it was getting pretty dark by then. I gave her a “good faith” bite every now and then just to keep her attention. Sometimes Ralph got a little close and she’d startle a bit. Since she was walking slightly behind me, at those moments all that was going through my mind were endless repetitions of “please don’t bolt,” but we made it home. I guess I wasn’t quite as fearless as usual. My heart was pounding the whole time. I breathed another sigh of relief to see that Scott was back and manning the gate. She walked in nice as you please, as if nothing had happened. Hmph.

All said and done, we still made it to conference only an hour late. Good thing the teacher was willing to stay a little later than she had planned. Good thing we have neighbors as great as ours (and they have an ever-handy Rhino!). People have told me Aurora would have come back anyway, but none of them saw her take off like her tail was on fire.

Ralph said (as I was falling all over myself thanking him) “Aw heck, that’s the most fun I’ve had all month!” Needless to say, we spent the rest of the next couple of weeks putting up better fence. And if it ever happens again, I’ll just get the oats.

It’s a good thing my neighbors are great people – even the ones I haven’t met yet. Thanks to them I have my horses back! 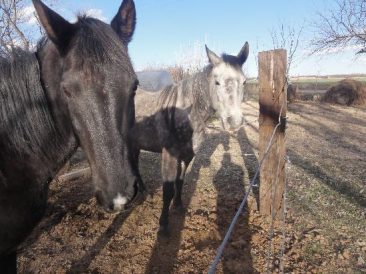