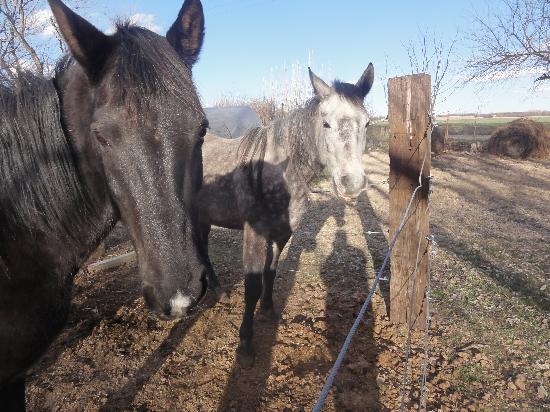 It was a dark and stormy night.Well, OK, it wasn’t.It was a chilly, cloudy, windy day, with drizzle and rain forecasted.I got my gumption up to go out and do chores wearing my typical hoodie, jeans, and lined denim jacket with work gloves.I figured I wouldn’t be out that long.

Stumbling out to feed the cats went as usual.  I stumbled.  I fed cats.  They purred.  I was on my way to let the chickens out into their pen when I noticed that the gate to the horse pen was hanging wide open.Sure enough, I looked up and there were both of my horses just across the road.Argh.

I went to the barn to get some alfalfa pellets in a bucket to rattle at them.I had high hopes that they’d follow me home.They, on the other hand, had high spirits.I called them sweetly, rattled the bucket, and they promptly charged away across the field.Luckily I’ve gotten into the habit of wearing my cell phone.I called my stalwart husband who, THANK GOD, had the day off from work, as I tried to keep my horses in sight.He corralled our son (no mean feat) and jumped into the truck to help keep an eye on the horses and try to get them back home.

I did call my neighbors to ask to borrow their Rhino like last time, but since they were out of town, it would have taken a boltcutter to unlock it.I’m just not that kind of person, SO . . .on foot and in trucks it was.

They played quite a game of silly buggers at first, coming closer to the house, then dashing away. At one point, we were within 100 yards of their pen. Up on the railroad tracks, back into the unfenced pasture, then OVER the tracks and away they went. Scott and I ended up in two vehicles just trying to keep tabs on them. “Does nobody out here believe in FENCES?” I thought, for the first time in my life. Usually I’m impressed by a landscape with no fences, but dangit, today I needed one.

After several hours of chasing and calling back and forth (our cell phone minutes are probably GONE for the next 6 months), we finally found someone who DID believe in fences, and as a matter of fact had their own herd of broodmares – and his unused pasture had an open gate. Mind you, we were a couple of miles west of our house by now, and had spent plenty of time trampling around outside the vehicles in 40 degrees with about 40 MPH wind. It was COLD.

We got them in the pasture (separate, but next to the broodmares), but they got out again. The air literally would have turned black if my son hadn’t have been with me. Another hour or so of chasing ensued, and wonder of wonders, we eventually got them back into that same pasture. Now mind you, it’s a BIG pasture. By then we were ALL tired, cold, and cranky. Scott went home to get the trailer. A girl can always hope for a miracle, right?Maybe they’d recognize it and walk in?I sure wasn’t walking home with them even IF we could catch them. I stayed in his car, shivering. His heater really doesn’t work that well, and all I was dressed for was a morning round of chores – not trampling around all over creation in this weather.

He soon came back with his Carhartts coveralls (the ones with full sleeves) for me to wear. I’ll tell you what, that was the best Christmas present I ever got him. I’m SO glad we’re close to the same size.We trampled around some more. A LOT MORE. Arthur, to his credit, was awesome at staying in the truck and amusing himself without destroying anything (a rarity in itself), especially since he was wearing shorts under the Spiderman costume that he insisted on wearing that day.At this point, we’d been chasing these critters for almost 4 hours.

I was ready to put up LOST HORSES posters (and tell whoever found them that they could keep the hussies). Scott hadn’t eaten, and Arthur had only had some granola bars and juice. All the while, I was cursing myself for having Arabian crosses. Arabs are known as “drinkers of the wind” and prized for stamina. Heck, if I would have had Quarter horses, they probably would have been worn out by now!

We were headed back home to take a breather (since they were confined in that pasture) when Barb called to let us know that she and Ralph were back, and had a pretty good idea of who owned that land. Scott ran into town to get oats (since alfalfa pellets, after all the fresh mouthfuls they’d had that day, were probably unappetizing). Sure enough, Barb made a call or two, and the landowner said he’d come out and help us.

So we remobilized. Back in the truck. Ralph, being the wonderful person he is, not only came to help, but brought BEER. (I really needed one by then!) Barb headed back to our house to meet Caitlin coming home off the bus. We got out to the pasture and met Gary, Toby, and Lisa. They went tooling around the pasture in their truck after the horses. I’d have done that myself, but . . .the pasture didn’t belong to me and I didn’t want to impose any more than I already had. Sure enough, within 15 minutes, they had my *bleeping* mares caught and headed back towards the trailer.

Then the fun ensued. Remember, the wind is whistling along at high rates of speed. It’s making the trailer whistle too. My girls haven’t been trailered in over a year. And, to top it all off, there’s a thunderstorm coming in. (Thank GOD the weatherman was wrong and it wasn’t raining all day.) So, with much prodding, pushing, and cooperation, we got the horses into our trailer just in time for it to start raining. YAY.

We got home in full rain. Scott had to get the tractor and move the plow to be able to pull the truck around to the horse pen. With Ralph guiding, he finally got it backed up and got the gates set up. We were ready to unload. Amid cracks of lightning and crashing rumbles of thunder, we got Aurora out first. She didn’t seem to want to come out, after all the work it took to get her in there. As she was coming out, it started to hail. With groans, we took her halter off and turned to Aces.

One of their adventures was running through a barbed wire gate. Aces had gotten a cut on her upper leg, plus a nick on her nose while trying to load into the trailer. I was armed with Bag Balm, and there we stood in the rain and hail, trying to smear the balm on her cuts. She was dancing and flinching, and we were all getting wetter and wetter. Hail was pounding on our heads.I slathered a thick layer of balm on her and decided to call it good.

Well, now that they were back, better feed them, yeah? Make home a nice place again? So I trudged down to the bale (still in the rain, hail, and lightning), forked them plenty of hay, and stopped to close the chickens in . . .but wait, the chookies needed food. Back to the barn. Feed the chickens. Throw the cat out of the coop. Wait, there are more eggs. Put them in a bucket that I hold at an angle to my chest so they don’t get wet. Aaah, the hail has stopped and the rain is lightening up.Get inside. What’s that? Now that I’m inside, the SUN IS SHINING?!? GAAAAH.

Scott is a truly wonderful husband. We both got in (dripping wet) and he said “how does pizza sound tonight?” I would have kissed him if I had the energy. As it was, smiling was an effort – at this point, my back was locked up tighter than Fort Knox and I needed dry clothes. I decided in favor of the pajama strategy. After all, even my UNDERWEAR were wet. He was awesome enough to run into town to pick up the pizza after he changed too.

Padlocks for the gates are in order. More gifts for neighbors are in order. (I took Ralph half a dozen smoked eggs today and I hope that Gary, Toby, and Lisa liked the loaf of barmbrack that I brought them.) I’m still exhausted and sore, but so very thankful for folks willing to help. Folks, no matter where you live, cultivate good neighbors. BE NICE TO THEM. Someday you’re going to need their help. Just be sure you help them back.  And for the record, both horses are doing well after their little “adventure.”  The Bag Balm really did help on Aces’ cuts.