The Magic of Farmers’ Markets 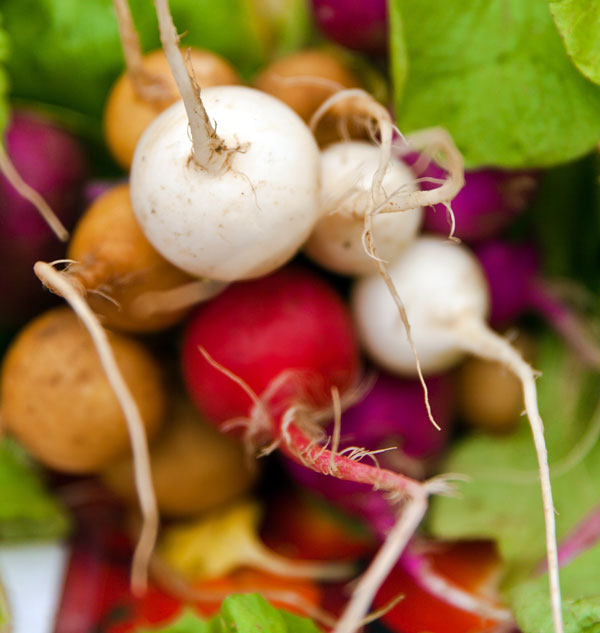 Lower-income women, infants and children, and seniors, all of whom may be nutritionally at risk, can participate in the Farmers’ Market Nutrition Program (FMNP), established by the USDA in 1992.
Photo By Fotolia/poladamonte
2 / 2 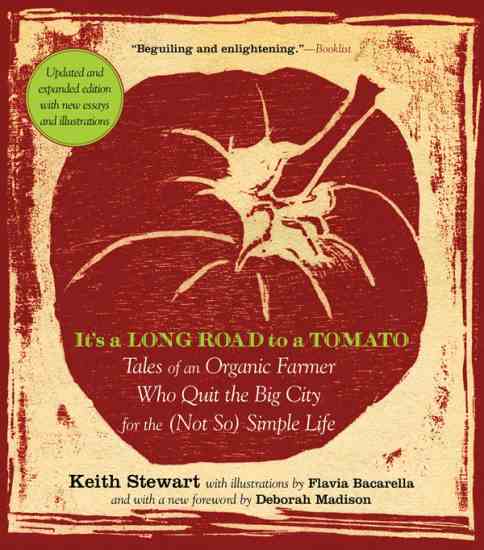 The second edition of “It’s a Long Road to a Tomato,” by Keith Stewart, has been updated with five new essays about life on the farm.
Cover Courtesy The Experiment
❮ ❯

Keith Stewart, already in his early forties and discontent with New York’s corporate grind, moved upstate and started a one-man organic farm in 1986. Today, having surmounted the seemingly endless challenges to succeeding as an organic farmer, Keith employs seven to eight seasonal interns and provides 100 varieties of fresh produce to the shoppers and chefs who flock twice weekly, May to December, to his stand at Union Square Greenmarket in Manhattan — the only place where his produce is sold. It’s a Long Road to a Tomato (The Experiment, 2010), opens a window into the world of Keith’s Farm, with essays on Keith’s development as a farmer, the nuts and bolts of organic farming for an urban market, farm animals domestic and wild, and the political, social, and environmental issues relevant to agriculture today — and their impact on all of us. The excerpt below comes from the section, “Buy It at the Farmers’ Market.”

You can purchase this book from the GRIT store: It’s a Long Road to a Tomato.

Picture this scene: a crisp, clear morning in early fall; a line of trucks and hastily erected canopies; men and women, their sleeves rolled up, unloading trays of bread, boxes of jams and cheeses, setting up displays of vegetables, fruits, flowers, even fish. Baskets overflowing with shining black eggplants, crates of red and yellow tomatoes, heaps of broccoli, cauliflower, green and golden squash, peppers of all colors and shapes, carrots that don’t look like they all came out of a mold, potatoes with the dirt of the field still on them. Where else, but at a farmers’ market, is nature’s bounty so evident, so proudly on display?

Where else can you be seduced by the fragrance of fresh-cut basil, bunches of sage, rosemary, thyme, marjoram, dill, oregano, and herbs even more exotic than these? When did you last see shoppers in a supermarket bending over to smell the produce? At farmers’ markets you see this all the time, because the scent of freshness is still there to be inhaled and enjoyed.

Where else can you find people engaged in commerce and so evidently enjoying it — the small talk, the jokes, the laughter, the exchange of recipes and advice, the feeling of community, the happy confluence of seller and buyer, grower and eater? Farmers’ markets have come a long way since John McPhee wrote his vivid essay, “Giving Good Weight,” on the early days of the Greenmarket in New York City, but his description of the flow of the crowd still holds true today:

“There is a rhythm in the crowd, in the stopping, the selecting, the moving on — the time unconsciously budgeted to assess one farm against another, to convict a tomato, to choose a peach.”

In 1970 there were a half-dozen or so farmers’ markets in all of New York State. In 2009, there were well over 400, with approximately 2,500 farmers participating. Revenues from these markets are in the tens of millions of dollars annually. And this phenomenon is not confined to New York State. A survey conducted by the USDA in 2009 counted 5,274 farmers’ markets nationwide, up from 2,863 in the year 2000 — that’s an increase of eighty-five percent over a nine-year period. Farmers’ markets have made a comeback, and for good reason. Whether you’re a farmer, a shopper, or just passing through, these days the market is a great place to be.

In many instances, farmers’ markets have helped to draw people back into neglected downtown areas that have lost customers to malls and shopping centers on the outskirts of town. In the area in which we live, the cities of Middletown, Kingston, Newburgh, and Poughkeepsie are cases in point. Though sometimes initially resisted, farmers’ markets soon become popular with local merchants, municipal authorities, and, of course, area residents.

Some years back, when a New York City Parks Department plan proposed trading a dozen or so farmers’ spaces at the Union Square Greenmarket in Manhattan for two rows of elm trees and a walkway, the public protested in the form of more than nineteen thousand signatures and thousands of letters opposing the plan. And these are people who like trees! But they value the market even more, because they recognize the positive impact it has had on their lives. To them it is an oasis, not just a place to come for fresh, good-tasting food, but also a place to come for the replenishment of their spirits. Like the town square of earlier times, the market is a commercial and a social environment, a place where local residents come to mingle and chat, to enjoy one another’s company and be reminded of their common humanity.

Farmers’ markets have had a very positive impact on farmers’ lives, too. Many of us would be in some other line of work today were it not for the resurgence of interest in locally grown food and the open market where consumers can buy direct from the source. It has become increasingly difficult for farmers here in the Northeast, with our short growing season and high production costs, to compete at the wholesale level with large growers in California, Florida, and beyond.

Today, the tomatoes in your local supermarket are likely to come from Mexico, the strawberries from Guatemala, the grapes from Chile — all places where labor costs are low and regulations to protect workers and the environment are few. The new “global economy” may be good for the agribusiness giants, but it can be deadly for small local growers.

Farmers’ markets offer one of the few remaining economic niches where small farmers can still make a living. Being able to capture the retail food dollar makes all the difference. Plus, it’s both enlivening and enlightening to leave the farm once or twice a week to interact with the people who are eating — and enjoying— what you grow.

People come to farmers’ markets for food that is fresh, nutritious, in season, and good tasting. They are looking for alternatives to the junk foods, fast foods, and highly processed foods that are so much a part of the American diet today. In a recent survey, New Jersey farmers’ market customers said they had greatly increased their consumption of fresh fruits and vegetables since they began buying from farmers at open-air markets.

Many farmers’ markets take an active role in promoting nutrition education and an interest in local fresh food. Chefs from nearby restaurants (many of them market customers themselves) are often invited to come to the market to prepare sample plates of their specialties, using local ingredients provided by the farmers. Customers taste the samples, meet the chefs, and may be inspired either to buy from the farmers or visit the chefs’ restaurants — or possibly both.

Even the federal government has recognized the value of fresh produce purchased directly from farmers. Lower-income women, infants and children, and seniors, all of whom may be nutritionally at risk, can participate in the Farmers’ Market Nutrition Program (FMNP), established by the USDA in 1992. Via coupons that can be redeemed only at farmers’ markets, this program encourages recipients to purchase fresh, unprocessed fruits and vegetables. Today, the FMNP is a highly successful program with bipartisan support in Congress. It has boosted small farmers’ earnings and introduced lower-income people to the rewards of eating fresh, local food.

There is another way in which farmers’ markets help to feed the less fortunate among us: They provide a great opportunity for food-gleaning and food-recovery services that cater to the poor and the homeless. Nonprofit groups such as City Harvest in New York City, with its fleet of trucks and army of young volunteers, pick up bags of perishable food donated by farmers at the end of a market day. Annually, thousands of tons of food acquired in this manner are distributed to the poor.

If all your grocery money still goes into the supermarket cash register, it may be time you stepped out into fresher fields. Chances are, this spring there will be a farmers’ market not far from where you live. Pay it a visit when the harvest is at its most bountiful. You’ll almost certainly have fun, and you just might become a convert. You might find yourself joining the growing number of Americans who have discovered that the local farmers’ market is just too good to pass up.