A Tough Nut to Crack

The holiday season is upon us when a woman’s fancy turns to baking! And one of the prime ingredients is nuts. Nuts in fudge, nuts in cookies, nuts in candies and cakes, nuts in salads and stuffings. And lets not forget peanut brittle! The most popular nut to bake with is the pecan. Followed by almonds and English walnuts. One of my personal favorites though is the black walnut.

Black walnuts are a basic part of farm life in the South. And they have had a bigger part in my life besides baking. When I was a child, there were two sure-fire ways for a youngster to make money. Collecting soda bottles (5 cents a return), or to sell black walnuts.

We have lots of black walnut trees on our 40 acres, but only three close to the house. They have been there all of my life. Years ago, Daddy would rake up the nuts and throw them in the dirt road that ran past our place so the cars would run over them and hull them for us. Then, usually in late October or early November, we would take empty burlap feed sacks, or gunny sacks as we called them, and stuff them full of the hulled nuts. We would load up the back of the pickup and drive 30 miles or so to the walnut factory where we could get as high as $7 for a load! And in the late ’60s to mid-1970s that was a lot of cash.

As a child, I was given a share of the profits which became my Christmas money for buying gifts. As I grew older, I could have more depending on how much work I put into bagging the nuts. One year I worked at it alone and gained the entire proceeds. How rich I was that year! I had enough money to buy Christmas presents and that new Carpenter album I wanted with money left over.

Probably why black walnuts are not very popular to cook with is the fact that they are so hard to harvest. I have never seen a harder nut to crack! How squirrels do it I will never know. Every fall, when we gathered our harvest to sell, Mom always kept a bushel basket for herself. Throughout the coming weeks, she would set outside and crack the walnuts with a hammer until she had a large plastic container full. Then she moved into the house and for the next few days she picked out the meat into a smaller container. This was accomplished in the evenings after chores and dinner were completed. She would settled down on the couch in front of her favorite show with the bowl of cracked nuts, an empty container, and a metal nut pick and work away. And when she was finished, there really wasn’t much to show for it. That bushel basket of black walnuts might only give her four cups of nut meats or “goodies” as we called them. But it was worth it!

There is nothing quite like the taste of black walnuts. Its a strong, earthy flavor that enhances so many dishes and just plain good to munch on as a snack. We could not afford pecans or other nuts, so all our baking was done with black walnuts. Mom never made fudge, but she did make cakes and pies with those goodies as well as putting them in fruit salads and jellos. And if there was enough left, they went into the Christmas stuffing.

We no longer harvest black walnuts for sale. In fact, I’m not sure there is even a place around here that buys them anymore. But my daughter-in-law and I still pick up a few for cooking purposes every year. Usually I sit out on the front porch to crack them on the front step with the exact same hammer my mother used and then take them into the house to finish them as Mom did, settled before a good movie while I pick out the goodies. My first bucket didn’t yield much as you can see, but it will be enough for a stuffing I plan to make. And there are always more where those came from. That is, if I can beat the squirrels to them.

Grandma’s 55-year-old recipe inspired us to crack a few dozen butternuts so we could make her Black Walnut Cake. 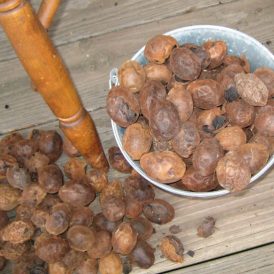