I don’t know about you, but I kind of stumbled into Food History.  It’s not like I majored in the subject at college.  No, my education has come from the ever popular hobby of cruisin’ yard sales, consignment shops and antique shops.  It is sad, the cooking utensils of my childhood are now showing up as – dare I say the word – “antiques.”   I even still own and use some of the items I was seeing labeled “mid-century.”   It’s a term I don’t approve of, antiques should be over 100 years old, not from the golden age of childhood, the 1950s and its neighboring decades.

Some antiques stump me.

Take this for instance:

I bought it because it looked like something I should know what it did – but I didn’t have a clue, neither did my husband or the lady who sold it to me. After a spirited discussion, in which alcoholic beverages played a part, hubby voted for something to create a wavy pattern in cake frosting. I’ve decorated cakes before – this didn’t look like anything I knew about.  After holding the mystery object and studying it from every angle I finally decided it was a crinkle cutter.  A quick search on the internet and I knew I was right.  Just to be sure I tried it out.

It worked but was much too slow to seriously use on a bag of potatoes.  After cutting only 2 potatoes I was convinced, it did cut crinkles into food but it was much too hard to use to ever cut potatoes for an entire meal.  Consequently, I still prefer buying my crinkle cut fries from the fast food establishments.

In all honesty, the crinkle cutter worked quite well on cheese, and carrots were a breeze. Not a total wasted purchase. I’ll put it in the gadget drawer for some future hors d’oeuvres tray.

And Yet Another Mystery Antique

As the crinkle cut debate was raging my cousin sent a photo and challenged me to discover what it was.  She said it was one of the favorite utensils in her kitchen.

Study the photo for a minute – do you have a clue? 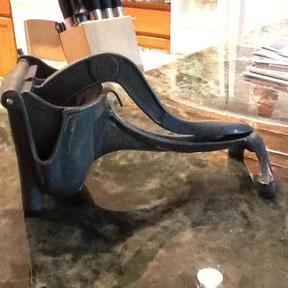 I guessed some type of potato ricer but I was wrong. Look again, do you see the spout?  It’s an orange juicer.  After yet another internet search I discovered it has a strainer that keeps the seeds out of the juice.  Good for oranges, lemons and limes.  No seeds and a handy spout for pouring into your glass for a Vitamin C start to you day. Clever!  Apparently Wearever made these in the 50s.  I wonder why I never saw one before?  Did my mother not love me enough to strain the seeds?

Do you have some odd kitchen utensil lying about; before you put it out at the next yard sale send a photo perhaps together we can figure out what it is.

A Love for Steam Engines

I always had a fascination for steam engines as a child. As an adult, I’m still fascinated by them. 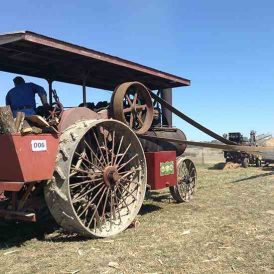 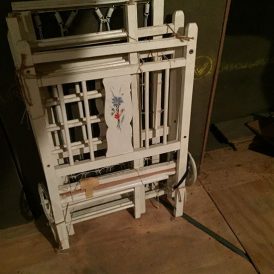