What is Sous Vide? 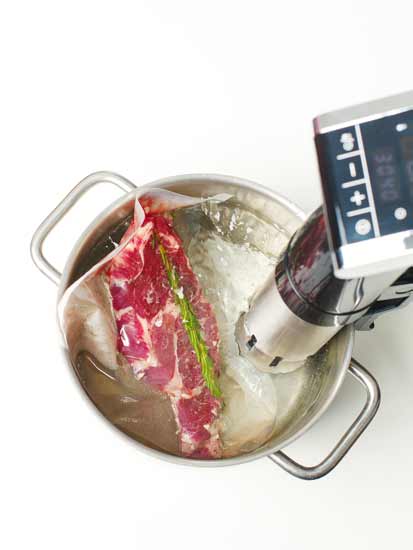 Sous vide, translated from the French, means “in a vacuum,” which can be a bit misleading. Basically it is the process of cooking food in a sealed container — that’s where the vacuum part comes from — in a water bath at a precisely controlled low temperature. It differs from traditional methods in that the food is cooked at the temperature it will be served at. So if you like your steak medium-rare (130 degrees Fahrenheit/54 degrees Celsius), you would cook the meat in a water bath held at that temperature.

What is the value of yet another way of cooking food? There are several good reasons for using the sous vide method, and they relate to both quality and convenience. It’s great for entertaining, because you can prepare much of the meal ahead of time. You can even set up your device and let it cook while you are out doing errands or having a nap. The sous vide process also maintains texture better than the usual methods. For instance, in conventional cooking the heat source is much hotter than the desired serving temperature, which increases the risk that the end product will be dry and overcooked. Consider, for instance, that medium-rare steak. To achieve an appropriately cooked center, you run the risk of overcooking the exterior. When you use sous vide, the entire piece of meat is evenly cooked to the desired doneness. Moreover, since it is cooked in a sealed pouch, your steak doesn’t dry out. Once you get the hang of it, you will probably leave your device set up on the counter and use it more often than your oven, as I do.

The History of Sous Vide

Although the basic principles of sous vide have been around for a couple of hundred years, the process wasn’t commercialized until the 1960s, when it made its way into industrial settings. The transition to restaurants began in the mid-1970s, when a chef-consultant working at the Restaurant Troisgros, a three-Michelin-star establishment in Roanne, France, developed a method to address the challenges associated with cooking foie gras. With traditional methods, foie gras loses up to 50 percent of its weight during cooking, which is expensive wastage for a commercial kitchen. It was found that wrapping the foie gras very tightly in plastic wrap and cooking it slowly in a water bath diminished the amount of waste. At about the same time, a food scientist named Bruno Goussault was developing a similar technology for use in large-scale food-service applications. 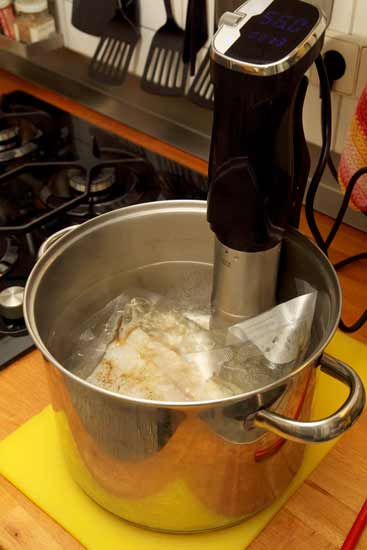 Over the years, sous vide gained traction at the chef level and especially with large food-service organizations, where the ability to produce good results by reheating previously cooked food is highly valued. In 2005 Amanda Hesser published an article in the New York Times concluding that sous vide “is poised to change the way restaurant chefs cook — and like the Wolf stove and the immersion blender, it will probably trickle down to the home kitchen some day.”

Around 2010 that trickle started becoming a surge. Until then, cost had been a barrier because the equipment was very expensive; acquiring just the immersion circulator cost about $1,500. But around that time the manufacturers began to produce cost-effective sous vide equipment. Today you can get your home sous vide equipment up and running for a couple of hundred dollars, outfitted with everything you need to produce delicious food to suit your needs. 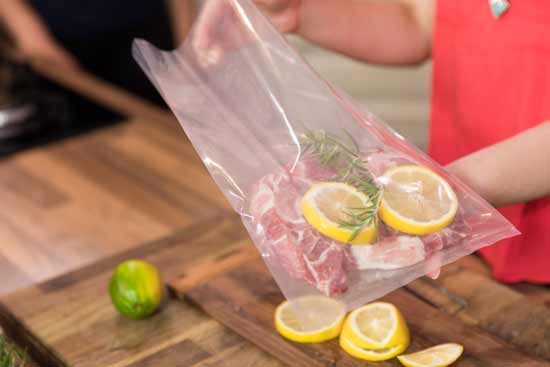 Because of the low temperatures used, cooking sous vide raises questions about food safety. Pathogenic bacteria grow rapidly in the “danger zone” — between 40 degrees and 130 degrees Fahrenheit (4 degrees to 54.4 degrees Celsius). Once food reaches temperatures above that range, the bacteria start to perish. The objective is to get food to the safe temperature zone as quickly as possible and for it to remain there throughout the cooking process. With sous vide we now have the opportunity to cook food near this danger zone with confidence. At 130 degrees Fahrenheit (54.4 degrees Celsius), food can actually be pasteurized if it is held at that temperature for long enough.

Pasteurization is a process that uses heat to destroy pathogens in food. Louis Pasteur, a French chemist, is credited with its discovery, which was initially used to improve the quality of wine. Previously, food preservation had been associated with salting, pickling, drying or processing at high temperatures over an extended period of time. Pasteur’s method, which used lower temperatures, also produced better-quality food. The process is named in his honor.

It’s important to know a little bit about pasteurization for meats, poultry, fish and seafood, since not all recipes that employ sous vide techniques result in thorough pasteurization. While most of us can tolerate some pathogens in our food, people with weak immune systems, such as the elderly and young children, cannot. Pregnant women are also vulnerable because their immune system is altered during pregnancy. Any recipe for meat, poultry, fish or seafood that is cooked below 130 degrees Fahrenheit (54.4 degrees Celsius) is unpasteurized and may pose a risk to those with compromised immune systems.

Sous vide cooking is the latest and hottest trend in home kitchens today. What technique have restaurants been using for more than 30 years to get perfectly cooked food? Their secret: sous vide, a simple and foolproof technique that involves cooking at precise temperatures. Conventional methods can often result in under- or overcooked food, but with sous vide, it will always be done to tender perfection. Entertaining becomes effortless and your guests will be blown away by the sublime textures and flavors. You’ll be wondering if you’ve really been tasting food for your whole life. Critically acclaimed chef Chris McDonald has years of experience with using sous vide devices. He presents all his tips and techniques for preparing and cooking a variety of types of meat, poultry, fish, seafood, vegetables, eggs and desserts. He also shares his wealth of knowledge about global ingredients, DIY butchery, food substitutions, selecting cuts of meat and types of fish, and much more. This is the book for anyone looking to cook sous vide, from the most basic beginner to the experienced home cook.

Courtesy of The Complete Sous Vide Cookbook by Chris McDonald © 2016 www.robertrose.ca. Reprinted with publisher permission. Available where books are sold.