I was trying to decide what to do my blog on this week and decided to delve into some folklore and write about Paul Bunyan, the giant logger of yore, and his giant blue ox, Babe. Why would I want to write about him again, you ask. Because out here we believe he really did exist! I know you are all thinking I’m crazy. And that’s fine.

Before I started writing, though, I did some research and there are some very interesting stories about Paul Bunyan. One says he was so big it took five storks to deliver him. Another one says it was five ‘giant’ storks. And yet another one said it took seventeen storks! That was one huge baby!

I read one story that said he was abandoned by his parents as a baby in a cave and found Babe in a snow storm during the winter the snow fell blue. In this rendition, Babe was frozen when Paul found him, or her, and Paul took the poor thing back to his cave with him and thawed it out by the fire. When Paul woke the next morning it was to Babe’s rough tongue giving him ox kisses. In another rendition his parents have to use wagon wheels for buttons and Babe was given to him as a gift when he was young. I’m not quite old enough to know which is true, though.

In most of the stories, I have found they all agree on a couple of key points. Number one being he was born in Maine. (Bangor, Maine to be exact in one story.) And he used to run around Minnesota a lot, and that was how the 10,000 lakes were formed. In one story he even created the Grand Canyon by dragging his axe behind him while he and Babe were traveling through Arizona. That was purely by accident, mind you.

Out here we still have Paul Bunyan Days in the small town of St. Maries, Idaho. St. Maries is in the northern part of the state by Lake Chatcolet and the St. Joe River. It is a gorgeous area with fishing and outdoor sports of all kinds.

Every Labor Day they have a three day event called Paul Bunyan Days where they honor Paul and his sidekick Babe, the blue ox. There are carnival rides and games, food booths, logging competitions of all kinds, and antique car shows. When I was younger I remember going to Paul Bunyan Days and wondering how those men ever stayed on the logs when they did the log rolling. They held them in the swimming pool instead of the river, I guess for safety issues. Paul and Babe are really a big deal up here. Not just for the folklore. I can already hear you laughing so I am prepared to offer up some proof.

To set the stage a little bit, I have a couple of photos of the canyons around the Asotin and Peola, Washington area. To get through these areas you had to have several good animals to pull your wagons, a good sturdy horse to carry you, or some mighty strong legs. Unless, of course, you were Paul Bunyan, then it wouldn’t take very many of those long strides to get you over these hills. 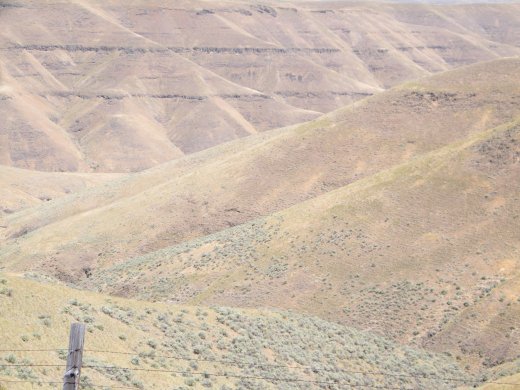 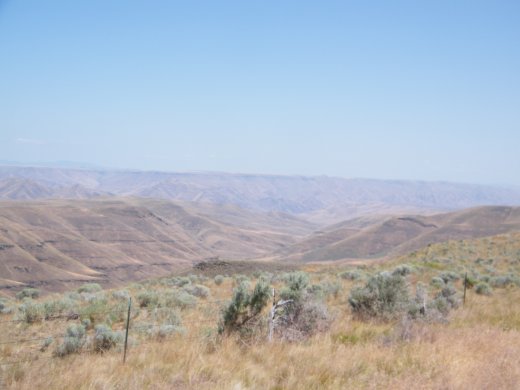 And now for the proof you’ve been waiting for – pictures! We have pictures of his footprints! I know these have to be from Paul Bunyan because they are too big for Bigfoot even. (And, yes, we know he lives out here, too.) The first photo is of the most distinct print, while the second photo shows both prints. The footprint closer to the camera is not quite as perfect, but if you look you can see it. We figure you don’t see Babe’s prints next to Paul’s because he stayed down in the creek bed where there was plenty of water. Smart ox, huh? 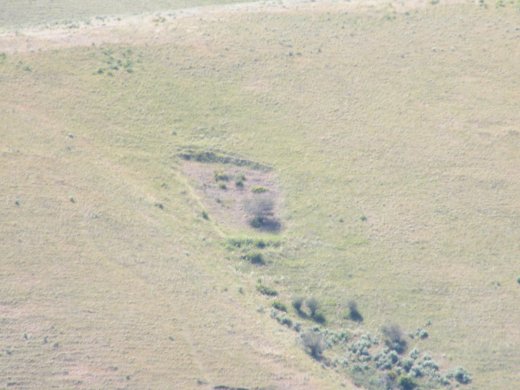 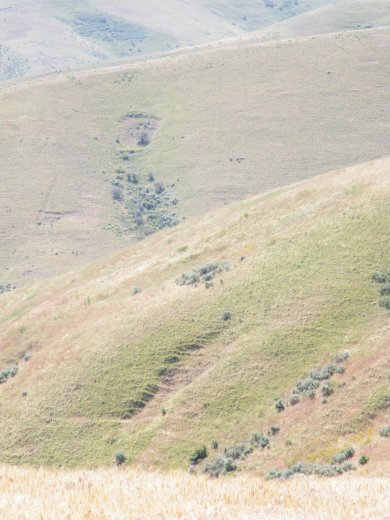