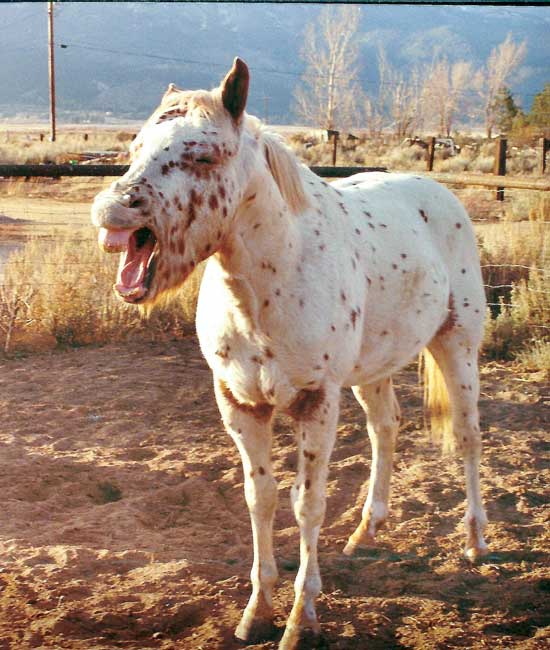 In 1990, at age 30, I went through a major life-changing event when my nine-year marriage ended. I returned to my childhood home and began to piece things together.

My sister owned a small farm outside of town, where she raised Appaloosas. We had grown up together on horseback, ranging the mountains and wilderness, working for a small horse rental business. There we learned much of the business of raising and training horses. Helping my sister with her horses was the perfect distraction for me as I looked for a new job, went to school, and looked for a new place to live.

As I went to meet the newest baby additions to my sister’s farm, I met the baby that was for me. He claimed me as well. Only a couple of weeks old, he came to meet me after peering out from behind his mother’s tail, and we immediately bonded. He was a shimmering white with rust-red spots like a Dalmatian, and he smelled of sunshine and fresh hay. I made arrangements with my sister to buy the colt, and began spending my free time with him. I named him Jessie, after Jessie James. My first precious horse had been Sonny James, Jessie’s brother. I lovingly called them my outlaw horses.

Gentle, slow, hands-on training built and strengthened my spirit as nothing else could. I messed with his feet, and brushed and groomed him daily. I taught him to lead and respond to steady pressures, to not fear someone leaning over him nor the feel of pressure around his middle from a hug, and I taught him voice commands.

On one occasion, my sister and I stood in the sun in front of her house discussing the horses, when we heard one of the colts screaming in the back. Slightly panicked about the cause, we rushed around the house to find Jess – he was calling for me. He had heard my voice and was actually calling for me as he would for his mother.

I managed to find a place to buy outside of town. It was great to construct my fences and get Jess close to me on the property to work with him. My sister was big into showing horses, and I agreed for the fun of it. Jess would get excited when the horse trailer was pulled into the yard. It meant reuniting with his childhood buddies, and you could hardly slow him down as he jumped into the trailer.

Jess was my strength when I had troubles, always there to listen and for me to lean on. On Christmas Eve, I even went out in the beautiful snowy night to hear the animals talk. To me, they spoke.

I remarried a man who dreamed of horses like I did. We bought Jess’s full sister, Dusty, who was identical to Jess, but had her mother’s personality. She was different from Jess, a little crafty, and very much my hubby’s horse. We bred Dusty to my sister’s stallion, and we called the colt Blu Moon Shado because of his blue eyes. Blu was always a little goofy and accident prone, but pure of heart.

When Jess was 10, he came down with melanoma, as many pink-skinned horses do. The subsequent trips to the vet made Jess fear the horse trailer, but we managed to subdue the tumors. Shortly thereafter, we moved to Oregon.

Oregon offered us beautiful fields of green grass, and we knew it was the right decision. In the misty fall mornings, we would call the horses, and we would hear the pounding of running hooves. Out of the mist would come three horses, eager to find what we had planned for them. I wouldn’t have been surprised if they had sprouted wings and flown.

In the summer, the three would often appear with purple racing stripes down their sides. They loved to eat blackberries, and with their purple lips, they would drag them across each other’s sides and backs. We had the only white horses with rust spots and purple smears.

We buried Jess by the blackberry bushes. Dusty and Blu stood at the corner of the field for weeks, and sometimes called to him, waiting for him to come back. He was magic, and I miss him.