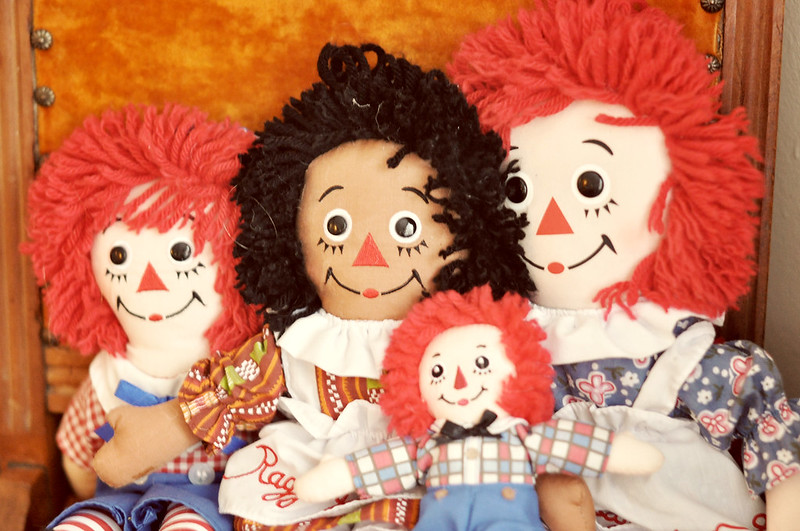 Gramma sent us something! We kids can’t wait to find out what she sent! We’re jumping up and down because Mom can’t rip off the tape and open the box fast enough! Out comes the homemade fudge. That’s good. Dark chocolate, caramel, and vanilla all loaded with hickory nuts or black walnuts. Yummy, yummy! Down in the bottom, we find our prize: Gramma’s hand-made Raggedy Ann dolls!

Sixty years later I can still remember this as if it was yesterday.

I was browsing through an antique store the other day and, lo and behold, what did I find but exactly the kind of dolls my grandmother used to make for us. Our dolls would not have made it through the years intact because we girls, especially, played so much with our dolls that they quickly fell apart.

These dolls, as it turns out, are as much a part of early Americana as apple pie but how they came to be is not known. There is only hearsay and theory. Patricia Hall, who is the biographer of the author of the Raggedy Ann stories, Johnny Gruelle, notes that the truth behind how the dolls came to be is a mystery. Not only that, but the author himself, either unwittingly or with the great sense of humor he was known for, started many of these legends, a number of which are still repeated as fact.

Hall further explains that according to one story, Gruelle’s daughter, Marcella, went into her grandmother’s attic and brought out a faceless cloth doll. Her father, the author, drew a face on the doll and then suggested that Marcella’s grandmother sew on buttons for the missing eyes. Hall says this was as early as 1900 and as late as 1914, either in Indianapolis, Indiana, downtown Cleveland, Ohio, or rural Connecticut. Gruelle’s wife, Myrtle, said the truth was Johnny himself who found a homemade rag doll in the attic of his parents’ Indianapolis home. She said, “There was something he wanted from the attic. While he was rummaging around for it, he found an old rag doll his mother had made for his sister. He said then that the doll would make a good story.” 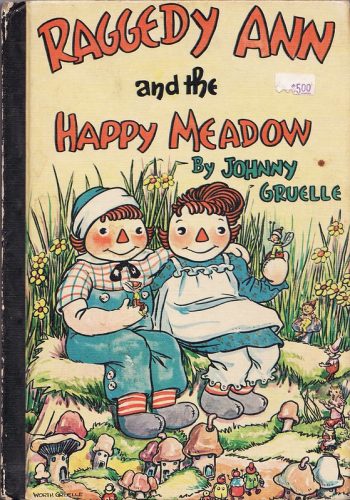 If you were to ask the childish me if I thought it was good that Mr. Gruelle had invented the dolls my resounding response would have been, “Yes!”

My mother told me that my gramma could sew without a pattern. She was that adept and practiced. Many times we would come into her dining room where, by the south-facing window, she had set up her treadle sewing machine. We would hear the clackety-clack of the machine as she quickly and expertly made some useful items. I’m sure Gramma could have made the dolls without a pattern but it’s likely she used one to make sure everything came out the same every time. 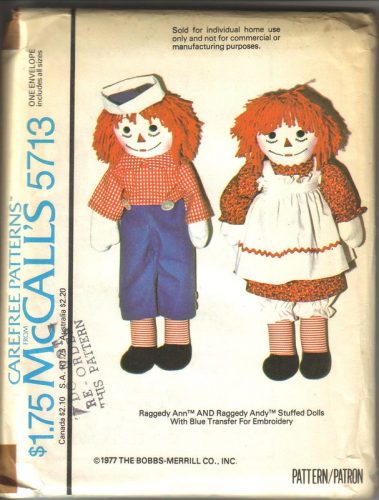 I guess I inherited her genes because I love to sew and the only thing that keeps me from doing it more these days is the price of patterns (sky-high compared to how they used to be!), the cost of yard goods (also not cheap!) and time.