Firewood for the Hearth

Winter’s coming. It’s more apparent in some areas than in others. That is to say, some areas of the United States have already experienced their first frost or snowfall while others linger in fall-like conditions. Out here where we live it’s the latter. It’s the time of year that I really enjoy because the temperatures are mild, it’s easy sleeping weather, and we’re getting a lot done. I love it because I can work all day in jeans and a shirt and not feel like I have to run and hide near the air conditioner or bundle up. It’s a good thing, too, because on a homestead, fall is the busiest season of all. 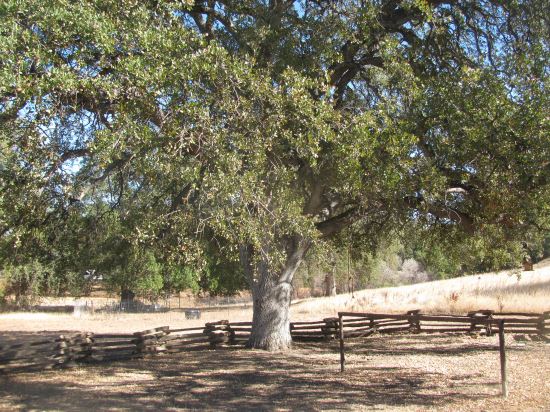 A large blue oak in front of our house.

For one thing, firewood needs to be cut and split. We actually started working on this in late summer. We’ve had deadfall – limbs that have naturally fallen off the tree – over the past two years, and we’ve made mental notes of what fell and when so we know that whatever we’re cutting and splitting is well seasoned. In other words, dried out. The best large branches were there at least a year before we cut them. Better yet if they are two years old. 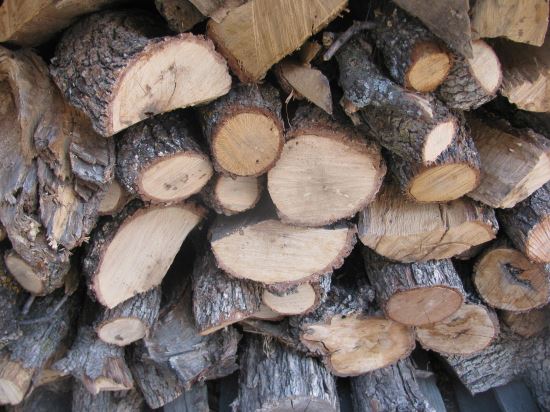 So now we have approximately three cords ready, and it’s stored and covered close to where we need it. A full cord is a large amount of wood. It measures 4 feet high by 4 feet wide by 8 feet long. The amount of solid wood in a cord varies depending on the size of the pieces, but for firewood it averages about 128 cubic feet.

We cut oak for our house because we like the quality of how it burns. We’re lucky to have a lot of blue oak, pine and cottonwood on our property. But of all the wood here, we think oak is the best because when oak is seasoned – and it needs to be well seasoned – it gives the most heat and the least smoke and ash. It takes a little more to get it started so we stocked up on lighter fluid and cut kindling from the building projects we had this summer. We use the 2×4 debris, and they split nicely into little matchsticks that properly stack.

An example of treated wood.

Just a note here, preservative treated wood should not be burned. For many years, the most common preservative mixture used for treated wood was a combination of chromium, copper and arsenic. When wood treated with this preservative is burned, some of the arsenic is released into the air and the rest is concentrated in the ash that remains in the fireplace. Newer preservative formulations that do not contain arsenic have largely replaced CCA, but it is still not recommended that they be burned. The most common types of treated wood are green in color and have little marks all over the wood. They usually can be easily identified. These materials should go to the landfill. Treated wood that has been outside for a long time may turn gray and can be hard to identify – if there is any doubt, throw it out. Wood that has been painted also should not be burned. As a matter of fact, in the realm of firewood, natural is key for clean burning and safety. Along with that, please resist the urge to burn garbage in your wood stove or fireplace. This just causes greater build up of soot. Here’s why: chimney fires.

That is the other reason we burn well-seasoned oak. It doesn’t have a lot of pitch in it and it burns hot so we don’t worry about cleaning out the chimney to avoid a chimney fire as much as someone who burns a lot of pine. All fires create soot and residue build-up, especially wood-burning fireplaces and stoves. There are many factors that can lead to the build-up of creosote. For example, the burning of unseasoned wood leads to the fire burning at a lower temperature and then soot build up is greater. A higher temperature fire tends not to have as much creosote build-up and so oak is a good choice.

The location of your chimney may also contribute to the amount of creosote buildup your chimney has. For example, a chimney on the exterior of a home will produce more buildup than a chimney in the center of the home because an exterior chimney will have a cooler interior temperature than one surrounded by the warmth of your house. Suffice it to say, if you have a wood stove that you’ve been using for years without having it inspected or cleaned out, you should clean it out right away. It’s very simple. Measure the inside diameter of your chimney then get the right size brush that fits it. Make sure there’s a long enough rod that goes all the way down your chimney. Then close the wood stove doors or cover up your fireplace front. If you don’t, there’s going to be a lot of soot in your house. Then climb up on the roof, take the chimney cap off and scrub away several times. Trust me, you don’t want to have a chimney fire, and cleaning will prevent this. 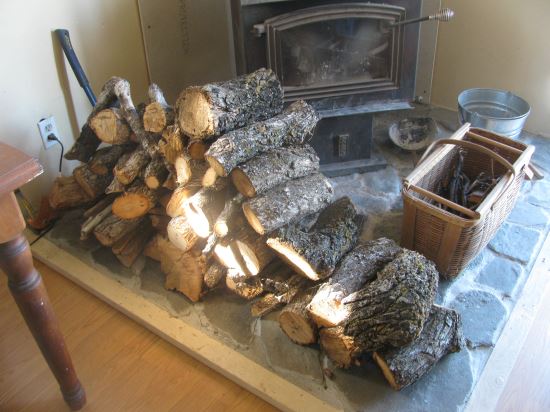 What we use each day.

Then the elephant in the room is always this: How much firewood do I need? The answer is frustrating: It all depends. Is wood heat is your only source? And, of course, how cold does it get in your area and for how long? We used about two cords of wood last year, but we have mild winters and we have a small electric wall heater. We use the wood stove to take the chill out of the room in the mornings and at night. The heat in the wood stove lasts for most of the day. We don’t heat at night. We use an electric blanket on our bed to warm the bed and then turn it off when we turn in. So we use about 2 1/2 cubic feet of wood per day from November through February and perhaps a little into March. That’s four months of 30 days so that’s 120 days of 2 1/2 cubic feet of wood a day equals about 2 1/2 cords of firewood.

We find it’s better to calculate for too much than not enough. Wood keeps from year to year properly stored so if you overdo it it’s no big deal. But if you under do it, it’s not so nice to have to go out and cut and split in the middle of rain or snow.

We have a gasoline-powered log splitter, Estwing axes and hatchets, and a small Echo and large Husqvarna chainsaws. This is our opinion: Don’t even bother with electric or cheap chainsaws. They just don’t have what it takes to cut firewood and they break down way too much. Get a good one! This is where they got the saying, “Quality is remembered long after price is forgotten.” In another blog post, I will discuss chainsaws and chainsaw safety.

In the meantime here’s a short list of firewood qualities courtesy of the Boy Scouts and the University of Oregon.

Oregon ash: Wet or dry, ash wood will produce a decent fire, but with a lot of, well, ash. Most ash cuts and splits relatively easily as long as it is still green.

Beech: Beech is a rival to ash, though not as good and only fair when green.

Birch: The heat birch produces is good but it burns quickly. The smell is pleasant.

Cedar: Cedar needs to be fully dried. It’s full of snap and crackle. It gives little flame but much heat, and the scent is beautiful.

Cherry: Cherry burns slowly with good heat. It’s another wood with the advantage of a pleasant scent.

Douglas-fir: This ubiquitous tree has medium heating value, doesn’t make too much ash, and is probably the best of the conifers for firewood – better than some of the hardwoods. Older Doug fir is easy to split. But some younger, second growth, smaller diameter trees can be extremely difficult to split.

Elder: Elder is a mediocre firewood. It is a very smoky, quick burner with not much heat.

Elm: This wood is unpredictable because of Dutch elm disease. It can, but not always, smoke a lot. But if it’s good, one large log put on before bed will keep the fire going until morning.

Horse Chestnut: This produces a good flame and heating power but spits a lot.

Larch: Larch is crackly, scented and fairly good for heat.

Big leaf maple: Maple is pretty close to the quality of ash and has similar cutting and splitting characteristics. It burns slightly cleaner, sparks a lot more and doesn’t heat quite as well.

Oak: Properly seasoned oak is hard to beat. It holds a fire, doesn’t spark, and much of it splits moderately well. But, it won’t produce much heat and will produce lots of ash if it isn’t adequately seasoned.

Madrone: When seasoned, this hard, dense wood burns very hot and produces long-lasting coals. Having little bark, madrone is clean to bring indoors. Some madrone is knotty and difficult to cut and split. It is expensive to purchase, but a little goes a long way in heating.

Poplar: Poplar is only poor to fair.

Spruce: Spruce burns too quickly and with too many sparks.

Sycamore: Sycamore burns with a good flame with moderate heat.

Walnut: Walnut is good firewood with a pleasant scent.

Willow: Willow is a poor firewood. It burns slowly with little flame even when seasoned. It is apt to spark.

Yew: Yew is one of the best. It burns slowly with a fierce heat and the scent is pleasant.

A rhyme to help you to remember:

Arrowhead Hunting With My Dad

The time machine is in our heads. 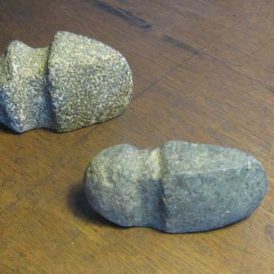