It’s getting time to celebrate our nation’s birthday; the fourth of July is almost here. I don’t know about where you live, but here in northeast Missouri the American flag is everywhere you look. Firework stands have already started to pop up; every time I turn around, there’s another stand.

I’ve gotten into decorating my antique tractors for the Fourth of July holiday. The F-20, F-30, and John Deere B each get an American flag displayed on them. I might even put a red, white, and blue lei on each of them, providing that I can remember where I put them.

The “boys” (aka my terriers Jake and Buddy), will be out and about showing off their patriotic style this year with red, white, and blue bandanas around their necks. And on the SUV goes another American flag flying from the window.

I remember what happened several years ago when I was still working as a carryout at one of the local grocery stores. One of my fellow carryouts came to work dressed up as Uncle Sam. What a surprise that was for everyone! He put a smile on everyone’s face that day. I managed to take a few good pictures of him and made prints just for him. He tried to pay me for them, but I wouldn’t accept his money. Just seeing the customers smile, especially the kids, was payment enough for me.

July Fourth, the Fourth of July, Independence Day, so many different ways to describe the same holiday. It’s still a day for people to show their patriotic side. Perhaps we should do that more than once a year, but this is the time of year when patriotism gets the most attention.

There’s times when I perhaps take my freedom for granted. I shouldn’t do that. So if I don’t say it often enough, thank you to all who serve. For your service and my freedom, I will be forever grateful. 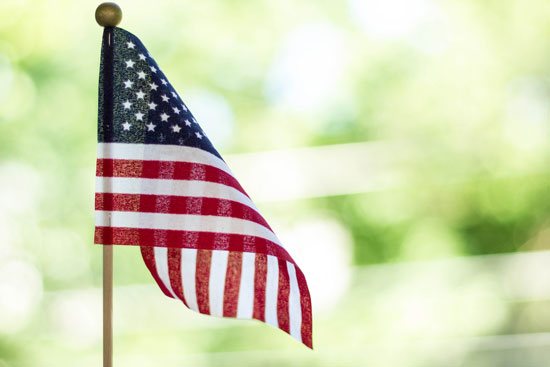