Looking Back In Time

I am going to go down memory lane a little in this post today. I hear all the controversy about how people should be raising their children, and I wonder how many people would have lost their children to the Department of Social Services so many years ago if that department had existed. I am not downing the state for helping children where it is needed, it is just some observations over the past 80 years of parenting from my family. I hope you enjoy!

This first picture is of my grandmother and grandfather on their wedding day, and the second picture is my grandmother with her youngest daughters. I wish I had some photos of grandma when she was young, but alas, not many people took pictures back then (it was a little more laborious then). Now, on to the stories! 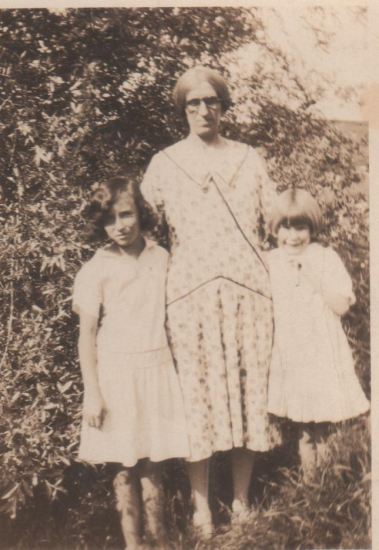 I don’t remember how old I was, but we were talking about playing as kids and she was telling me about a time when she was running down a path, heading toward a creek near where they lived. She told us she was the smallest, so she was the last one in line because it was harder for her to keep up. She said they were running along and jumping over sticks and whatnot on the path when the child in front of her jumped over a stick. She started to jump over the same stick, and the stick moved! She said she did a reverse jump and headed back home screaming. She believed she was the only child that had ever reversed their jump in mid-air without touching the ground. Of course, all of the other youngsters probably thought she was crazy because by the time they got stopped and caught up with her the snake was long gone.

Most of the time kids do not go anywhere like that unsupervised now. And if there was a snake, we would call 911 and have it dispatched forthwith. Unless you live in the country, then your dad — or mom — would dispatch it for you!

This picture is my mother when she was probably in her late 30s or early 40s. Obviously, I wasn’t here yet to know that for sure! 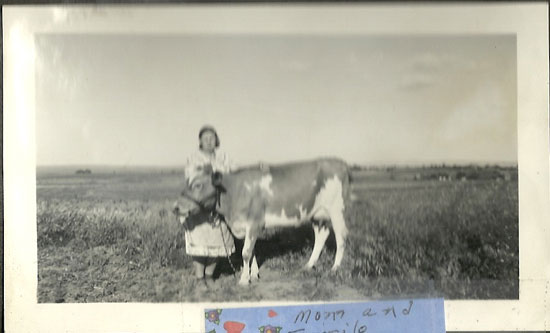 She was the one who usually washed the dishes, she said. She was telling me of one time when she had just finished heating the water on the old wood cookstove. There was a terrible thunderstorm outside, but she didn’t think much about it. Until the lightning came through the kitchen window, that is, and danced around on the top of the stove for a bit. Since she was the only one in the kitchen at the time, no one else saw it. Everybody thought she was just being a “scaredy cat” because of the thunder and lightning.

Now days, people would not be letting their children heat up the water on a wood-heated cookstove, even with adult supervision! The adults would not even be doing that! And heaven forbid we allow the children to call their sibling a “scaredy cat!” Does that word even exist anymore? Just curious. Plus, we don’t wash our dishes anymore, anyway. We have dishwashers. I do love some of these modern conveniences!

We are going to move forward in time again with this next story.

This next photo is a picture of my brother carrying weeds on the peach orchard with mom and dad in the Lewiston Orchards in Idaho. Lewiston Orchards is called that because that’s where all the orchards used to be as opposed to the people who lived below in “the town.” And, of course, the town was Lewiston, Idaho. In that day and age, it was expected that the children would help on the farm or in the garden. They had chores. They also had to clean their own rooms. And the girls learned how to use the wringer washers — while the mothers prayed they wouldn’t get their hand stuck in the wringers — while the boys learned how to drive the tractors and other pieces of farm equipment. And the mother’s prayed they wouldn’t fall off and get mangled by the machinery. But they also learned important lessons in safety and self-sufficiency. Today, the children are learning about the world they live in. Computers, cell-phones, connectivity, etc. It is still all about learning how to take care of one’s self in the world we live in. 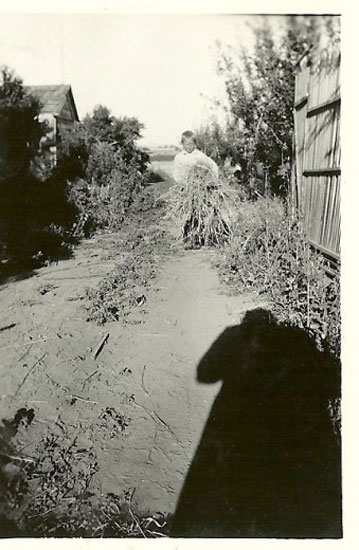 Most of the time now the only kids who know much about any of this live in the smaller towns or rural areas. I am so very glad to see people who are truly wanting to go back to some of these older ways of living so they can live a healthier, more fulfilling life. Home-grown foods are so much better than all this stuff they sell in the grocery stores. Most of that “fresh” produce has been sitting in storage for so long it can barely be called produce, let alone fresh. I am also very glad to see some of the younger people today who want to learn some of the skills that have almost been lost with the advent of machines that do it all. Now, obviously, these last statements are my opinions, but I feel like I learned so much more than some of the children of today have the chance to learn.