My sister came to visit from Colorado this year. We have had plenty of time to reminisce about when we were kids and it seems like only yesterday.

Early in the morning on Christmas day the house was dark when we woke. At the end of the hallway we could see the glow from the lights on the tree and we felt the energy rising in our chests. Santa had come and what would we find? We kids were completely entranced by the magical transformation of the living room from an empty room with a tree to piles and piles of presents on Christmas morning.

We kids believed in Santa Claus and we didn’t have a clue about why Mom and Dad were so bleary eyed on Christmas morning and hard to pry out of bed. Now I know why. Of course, we all know why. It was from late night assembling and wrapping presents on Christmas Eve. Dad was barely able to keep his eyes open but he dutifully opened his bottles of Old Spice after shave and shaving cream and loved every single silly thing. 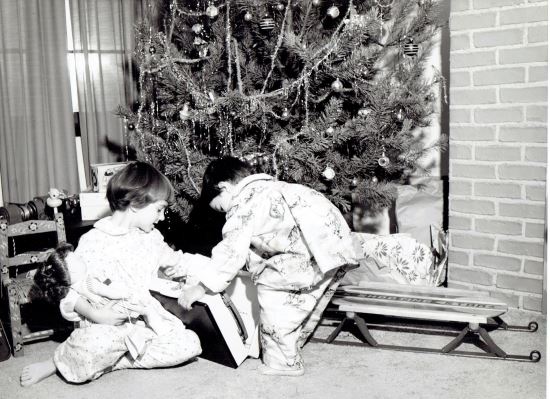 I still remember the sled and the doll and the chair and the record player. What a time it was.

In the days prior to Christmas we had gotten the large parcel from Grandma Frieda like we always did. Gramma Frieda would make fudge with walnuts and Raggedy Ann and Andy dolls. Sometimes she made sock monkeys. We loved getting those large parcels in the mail.

Then on Christmas day dad would make oyster stew. It had been a tradition in his family. I never found out how or why the tradition began. Maybe they wanted something super special and oysters were not something one would find in Ohio on a regular basis. I didn’t really like the oysters themselves. The texture was something more than a finicky child could bear. But the taste of the oyster crackers swimming in that milky broth with butter was heavenly. Now I’ve gotten over being finicky and the oysters are heavenly, too.

1 quart half-and-half or evaporated milk diluted by half

Melt butter in a skillet over medium heat and cook shallots until tender.

Pour the milk into large pot over medium-high heat. Add the butter and shallots, stirring constantly.

Just before the mixture is ready to boil add in the oysters with their liquid. Season with salt and pepper. Don’t let it boil or the milk or cream will separate.

When the oysters begin to curl they are done.

Garnish with dried or fresh parsley flakes and serve with crusty bread and butter or oyster crackers. We just fill the bowl with a bunch of crackers and pour the stew in over top. Heavenly.